The Southern Poverty Law Center began in 1971 in a small office in Montgomery, Alabama. Today, it has offices across the Deep South and in the nation’s capital, demonstrating our focus on a region where victories for social justice frequently have national impact.

The SPLC is headquartered in Montgomery with state offices in Atlanta, Georgia; New Orleans, Louisiana; Jackson, Mississippi; and Tallahassee and Miami, Florida, as well as an office in Washington, D.C. 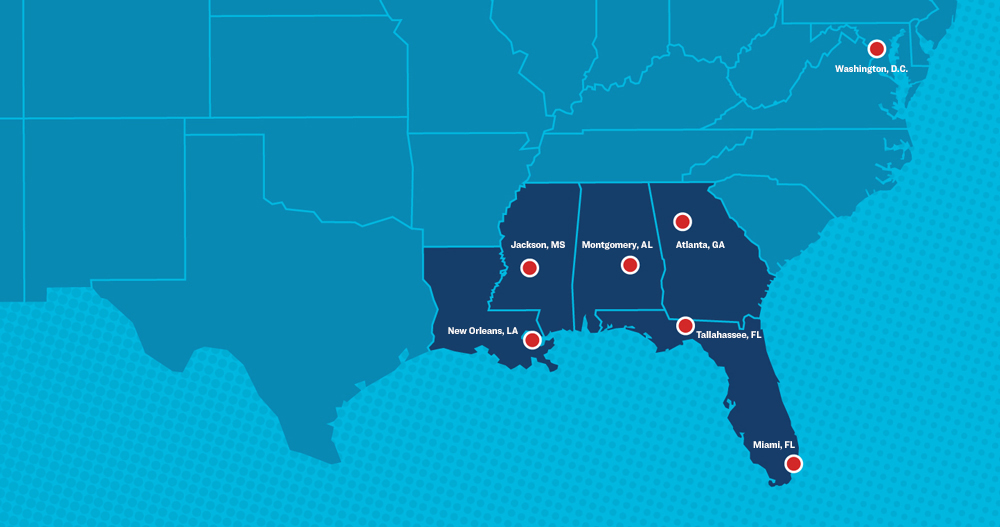 The locations of the SPLC’s offices place our staff at the center of many of the most pressing issues facing the region – and our nation – today. Our New Orleans office puts us in a state with a reputation as the “incarceration capital of the world,” highlighting the urgent need for our work to reform the criminal justice system and end mass incarceration.

Our Atlanta office places us in a state that’s a focal point of immigrant justice, because it’s home to several immigrant detention centers, including the sprawling Stewart Detention Center. Our Florida offices in Tallahassee and Miami allow us to serve a large state with a broken juvenile justice system that needlessly criminalizes young children, denying them an education and other opportunities for rehabilitation.

Our offices in Jackson and Montgomery place us in the capital cities of two Southern states that epitomize how race and poverty continue to intersect daily life in the United States in myriad ways, whether it’s education, economic justice, criminal justice or voting rights.

These issues and more, however, are not confined to a particular state, nor do they represent the extent of the work within any office. The SPLC’s network of state offices allows the organization to not only address various issues within these states, but also to work across state lines for regional impact. And our Washington, D.C., office allows us to raise issues from the communities we serve to the highest level of government.

Our approach heeds the words of W.E.B. Du Bois, who said, “As the South goes, so goes the nation.” The work of the SPLC has proven the truth of this statement as we change the South to lead the way for the rest of the country.