When Samuel called his family from the immigrant prison nearly six hours away from his home in South Carolina, his 8-year-old son was angry.

“Papa, are you going to come home?” Angel asked his father, who was calling from Stewart Detention Center in Lumpkin, Georgia. “I want to be with you, in the center.”

Samuel told his son he would return home soon. But he didn’t know if he could keep his promise.

“I was always afraid I would be deported,” he said in Spanish during a recent interview. “I never knew if I was staying or being deported back to Honduras.”

After more than a year away from his family, Samuel went home, but only after the Southeast Immigrant Freedom Initiative (SIFI) – a project of the SPLC that provides pro bono legal representation to immigrants facing deportation proceedings in the Deep South – took on the hard-fought battle to secure his bond.

Samuel, who found work as a welder after coming to the U.S. in 2005, was the family’s breadwinner. At home, as his wife worked two jobs, he took Angel – who suffers from developmental delays and needs speech therapy – to pediatricians and multiple therapists.

He was making a good living and was providing for his family until he was arrested in the summer of 2018 during a workplace raid by U.S. Immigration and Customs Enforcement (ICE). His wife found an attorney for him, but before his hearing, he was transferred to a facility in South Carolina while awaiting a charge for a nonviolent offense. He spent five months behind bars, paid his fees and honored his debt to society. Samuel hadn’t harmed anyone and said he would never harm anyone. His was not a crime involving moral turpitude, or any crime that would subject him to mandatory detention.

But after pleading guilty to the offense, he was again transferred to Stewart in January for removal proceedings. But this time, he didn’t have an attorney on his side.

The separation from his family, combined with abuse from the guards, made Samuel’s detention almost too difficult to bear.

“[The guards] ask us, ‘Why did you come to our country?’” Samuel said. “They told us, ‘You don’t have rights here.’ They would threaten to put us into segregation. They kept the showers cold, and we weren’t given shampoo or toilet paper.”

One morning, the guards threatened to throw him into solitary confinement just because he was talking to another detainee.

“They keep people from eating, and even from speaking,” he said, adding that the guards would often threaten to have them deported. “Most are racist. They always yell . . .  . You’re supposed to treat them with respect, but they don’t respect you. We are treated as prisoners, nothing more.”

During the day, Samuel was given an hour outside to play soccer on a small plot of sand. But there was no shade from the hot sun, and in the winter, it was too cold to even stand outside. Most detainees did not even want their “break.”

“There is nothing to do but watch TV,” Samuel said. “I was very bored, and I couldn’t sleep. I was always thinking – thinking about them deporting me. I cried every day; I just wanted to see my family.”

At night, separated from his wife – a U.S. citizen – and his daughter, Carolina, 6, Samuel – whose name and those of his family members have been changed for this story – prayed fervently for his loved ones. He asked that God keep his children, who are both U.S. citizens, safe.

“I always dreamt of my family,” he said. “I would clutch my pillow and cry, asking God to please reunite me with my family. I asked that God not leave my family without me, because they need me, and I need them.”

Samuel spoke with his wife and children every day, but only because he worked for $2 a day cleaning the toilets at Stewart. This allowed him to pay for the costly phone calls home.

Working for pennies on the hour is commonplace at Stewart. A class-action lawsuit that the SPLC filed in April 2018 revealed that detainees are forced to work for as little as a $1 a day, even if they are sick or unable to work. Those who do not work face solitary confinement or lack of access to basic amenities and phone calls to loved ones, which cost money.

So Samuel worked. He worked because he had to, because he couldn’t live without a constant connection to his family.

As Samuel spoke to his children one day, Carolina said, “Papa, I miss you a lot. I miss you, and I’ve been praying for you.”

This made Samuel weep, and broke his heart.

To make matters worse, Angel’s symptoms intensified in January, when Samuel was again locked up at Stewart. Letters from therapists testified that Samuel’s absence in his son’s life was only amplifying the boy’s misery and his tendency to act out in school.

In a letter from South Carolina’s Department of Mental Health, a therapist detailed the severity of Angel’s problems.

“Angel has a hard time expressing his emotions and often has tantrums or acts out angrily . . .  ,” the letter stated. “[He] does not understand why his father is in ‘jail’ and was ‘taken away from him’ . . .  .”

The letter also notes that after a disagreement with his teacher at school, Angel called the school staff “kidnappers,” and said he wanted to “call the police,” so he could be sent to “jail” to be with his father. The separation was nearly destroying him.

Carolina, who also needed speech therapy, wept each time she spoke to her father on the phone, saying she was sad and in pain. During his detention, Samuel had only one opportunity to see his family face-to-face, and that was through a glass partition, where the family spoke to one another on a telephone for a mere 30 minutes. When they said goodbye, Samuel hung his head and sobbed. He didn’t know if he would ever see his family again.

But his prayers were answered in March, when SIFI took on his case for bond.

Only one in six immigrants who are detained in the Southeast have access to legal counsel — and without it, their rights are frequently trampled. When they do have an attorney, they are 10 times more likely to win their cases.

SIFI Attorney Matt Boles gathered letters that supported Samuel’s good character, his morality and his role as a loving and supportive father and husband. The letters came from his previous attorney, along with Samuel’s wife and his mother-in-law, Hilda. In her letter of support, Hilda explained how difficult life would be for her daughter’s family should Samuel be sent back to Honduras.

In part, Hilda wrote: “[Samuel] loves his family and dedicates himself to his family one hundred percent. I can attest that he is a good person that I trust blindly. He keeps good friendships . . . is a respectful person [and] believer in God. He is a good human being. He is a good father, husband and friend.”

Boles also gathered more letters from mental health specialists who discussed Angel’s behavioral problems and developmental delays, and how they had worsened since his father was locked up. One therapist wrote that if Samuel were deported, it “will adversely impact [both children’s] development and mental health.”

Another doctor who worked with Angel concluded that “[Samuel’s] role in his son’s life cannot be understated.” 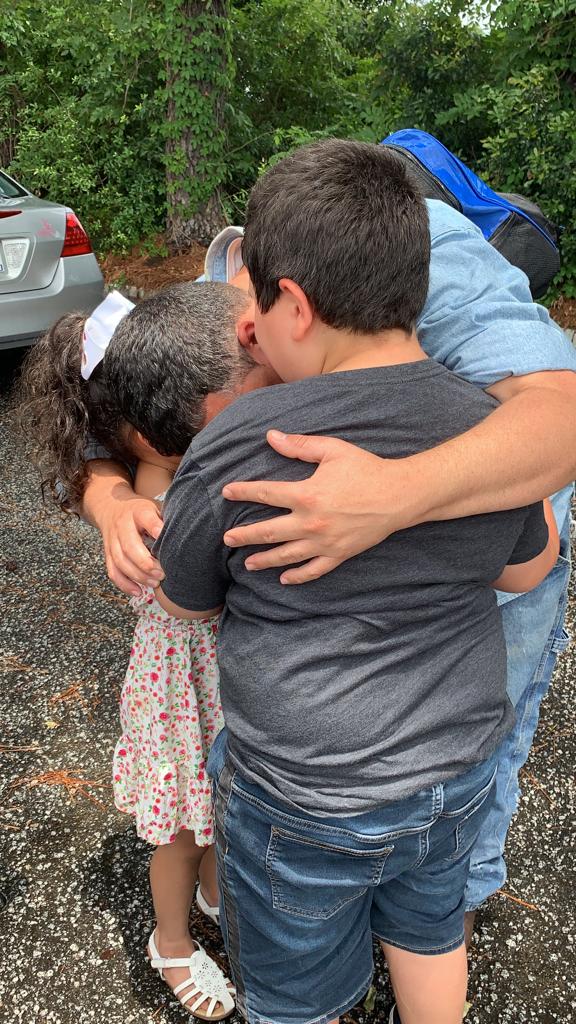 Samuel with his children

In June, right before Father’s Day, Samuel waited in a quarantined unit as Boles argued Samuel’s case for bond in court. Samuel received the news that his bond had been granted via video, which left him speechless.

“I thought, ‘I can be with my children again!” he said, recalling the moment through tears. “All that time locked up, and now I was free. I couldn’t believe it. I was incredibly happy. It was a special day.”

After leaving Stewart, Samuel was met with hugs, smiles and cheers from the family he had missed so deeply.

But Angel was worried his father would be taken away again. Samuel reassured him, saying, “I’m not going back. I’m never going back.”

Back at home, Samuel says he still thinks of his time at Stewart and cries. But the tears come when he looks at his children, who sit next to him on the sofa while the family watches TV together.

“I am so happy to be reunited with my children,” he said. “Thank you, SIFI, for giving me a second chance.”