As Rogelio slept in his cold bunk bed at an immigrant prison in Georgia, a fellow detainee crawled under the covers in a bed next to him and exposed himself.

Fearing the man would attack him, Rogelio quietly slipped a piece of paper to a prison guard with the words “urgent, please help” written on it in Spanish.

The guard ignored him completely, Rogelio said. But the next night, it happened again.

“That’s when everything started getting really rough for me,” Rogelio, 55, said recently in Spanish. He was only two weeks into the months-long detention that would test his limits and find him at his breaking point.

The day after he reached out to the guard for help, Rogelio went to the library at Stewart Detention Center in Lumpkin, Georgia, to fill out paperwork for his asylum application. There, an official asked him what happened, so Rogelio reported the sexual misconduct in a handwritten letter in Spanish to the immigrant prison staff.

In part, the letter reads:

When I wake up, he smiles at me and makes signs with his hand . . . He pulls up the covers, lowers his pants and shows me his private parts . . . This happened several times . . . I requested an interpreter, so I could ask the official to change my bunk. I was afraid, because [the man] kept saying, “bathroom, bathroom,” to me in Spanish.

Police came to interview Rogelio, and told him he didn’t have “sufficient proof” the incident occurred. One day, however, the man who had exposed himself to Rogelio was gone from the dorm room.

But the damage was done, and Rogelio had to seek the help of a mental health therapist to cope with the trauma. Guards put him into el pozo, or segregation, before the Southeast Immigrant Freedom Initiative (SIFI) – a project of the SPLC that provides pro bono legal counsel to detained immigrations in the Southeast – helped Rogelio get out on parole from the immigrant prison.

Rogelio had been working the political scene in Mexico since the early 1980s. But in 2018, he found evidence of voter fraud and published what he knew on his Facebook page. Almost immediately, various political parties threatened to have him jailed and killed.

Also, because of intolerance in his home country surrounding his sexual orientation, Rogelio – who is gay – was often the victim of discrimination and violence there. Police even beat him to the point where one of his eardrums burst, he said.

Rogelio fled from Mexico in November 2018, arriving in Laredo, Texas, to seek asylum. At the border, he waited over four hours with scores of other asylum seekers, and was given a single piece of bread. U.S. Customs and Border Protection took his phone from him, removing the only connection he had to his sister, who was waiting for him in Laredo.

He was then taken to the Rio Grande Detention Center in Laredo, where he was locked up for 10 days. There, Rogelio passed the interview given to asylum seekers to determine whether their fear of home is credible.

However, U.S. Immigration and Customs Enforcement (ICE) decided to detain Rogelio while he pursued his claim for asylum, putting him onto a plane that took him to Mississippi. Then, he was stuffed onto one of four buses that took him and other immigrants to Stewart. The trip lasted 24 hours, and he wasn’t allowed to use the restroom until he arrived, nor was he given anything to drink.

As soon as his detention began, Rogelio’s health took a nosedive. His blood pressure began to soar, and he suffered excruciating headaches. When he asked prison guards for aspirin, they snickered, saying that Rogelio “lied all the time.”

“If someone is dying in detention, or if someone is in pain, the guards don’t believe you,” he said. “Instead, they mock you.”

What’s more, Rogelio said the guards simply will not allow detainees to talk – not even those who speak English.

“They tell us to ‘shut our damn mouth,’” he said. “They would prefer we watch TV all day. The men [the guards] treat nicely are the ones who stay quiet.”

Rogelio found that the minutes at Stewart slowly ticked by, leaving no trace of one hour to the next, as if time had been suspended.

“The days are nights, and the nights are days,” he said. “There is absolutely nothing to do.” 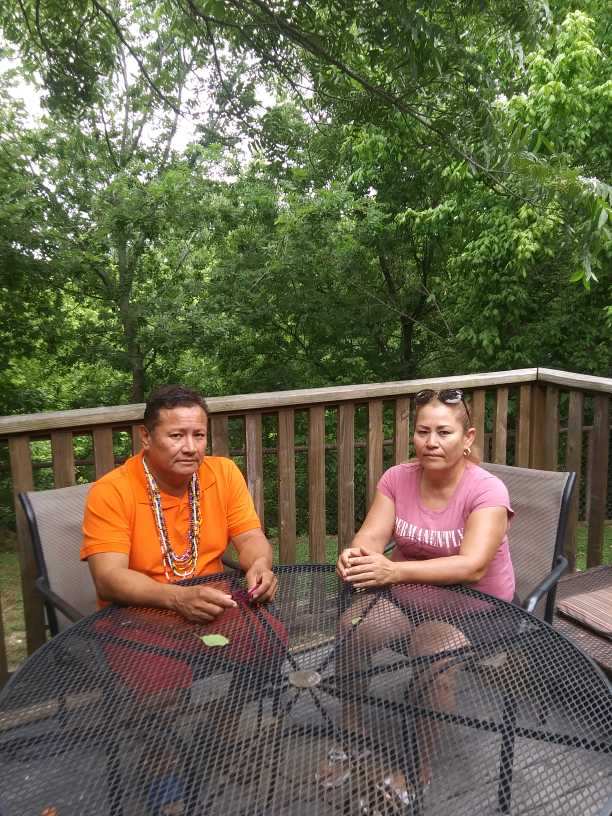 Rogelio with his sister, Marciela (Photo courtesy of Rogelio)

Being in segregation made communication with his family and lawyers much more difficult. Rogelio could only make calls at certain times, and those who came to see him in person, like his attorney, would have to wait several hours to visit, until all other visits were done.

By March, Rogelio’s health was still in decline. He continued to endure headaches, suffered a nosebleed, and was constantly short of breath.

One day, he felt his heart wildly hammering in his chest. He was brought to the hospital and treated there for a couple days. The hospital physician said the stress and pressures of detention were contributing to his health problems.

He was prescribed a pill that caused him to feel dizzy, as well as amlodipine to treat his high blood pressure. The amlodipine caused his face to go numb and made him feel “drugged” to the point where he couldn’t recall the days, so he stopped taking the medicine.

“I was scared I was losing my mind,” he said. “When the guards entered my cell to check on me, I was very frightened. I was afraid they would inject me with medicine, so that I would forget everything. I woke up once and had no idea who I was, who was there, or why I was detained.”

Rogelio recalls these days as the worst of his life.

“I arrived [at Stewart] healthy, but then I got really, really sick,” he said. “The pills were causing me pain. I couldn’t even speak. I have never lived through anything like that in my life.”

It took weeks for Rogelio to receive the medicine prescribed for his heart. When he asked for a medical request form back at Stewart, the guards again laughed at him.

A doctor also told staff at the immigrant prison to provide Rogelio with a diet that included more protein, but Stewart failed to do so. Locked up by himself in a cell, he was famished.

“I was always hungry,” he said. “But nothing changed. [The guards] were against me, putting up obstacles. I was just grateful for SIFI, because they were the only ones helping me.”

As his health deteriorated, SIFI Lead Attorney Erin Argueta was working to secure his parole. Only one in six immigrants who are detained in the Southeast have access to legal counsel — and without it, their rights are frequently trampled. When they do have an attorney, they are 10 times more likely to win their cases. On March 22, Rogelio was granted his release on parole from Stewart.

“Rogelio was locked up at Stewart only because he came seeking protection from persecution in Mexico,” Argueta said. “The current focus on detaining more people in more remote locations overwhelms the system and allows for the abuse and lack of access to adequate medical care that Rogelio experienced. Many asylum seekers with meritorious claims are forced to give up. Luckily, SIFI is on the ground in Lumpkin and was able to advocate for Rogelio so he could be released to his family.”

While thankful to no longer be locked up, Rogelio says the day he was able to leave Stewart was not a happy one.

“I hadn’t seen my family [in Laredo] at all,” he said. “I had nothing with me. I had to prepare myself to get to Texas, but an official wouldn’t let me call my sister. He didn’t even give me my heart medicine.”

The official dropped Rogelio off at an airport. He had no phone and was scared and cold.

At last, a helpful stranger at a gas station let Rogelio use a cell phone to call his sister. He arrived safely back in Laredo on March 25.

However, his detention has left open wounds that still haven’t healed.

Rogelio’s wishes were simple when he arrived at the U.S. border seeking asylum. But the country has let him down.

“All I wanted when I came here was safety, security and to work,” he said. “But the U.S. doesn’t open doors like it promises, and ICE hurts us mentally and physically. As a child, I never imagined my life would turn out like this.”