The Intelligence Project identified 266 antigovernment general groups, which believe the federal government is inherently tyrannical and traffic in conspiracy theories. These include groups which self-identify as militias, but do not have any proven paramilitary activity.

In 2021, the conspiratorial and permanently dubious view of government was pervasive, as evidence by the movement’s popularity on such issues as COVID-19 regulations, local school curriculum, the “Big Lie” voter fraud, border security and various technological advances such as 5G cell service. Antigovernment imagery, such as the Gadsden flag and the Three Percenter logo, was commonly displayed by adherents across the country. Antigovernment groups were linked up with other hard-right groups in 2021, as they often targeted the same marginalized communities and engaged in actual or threats of political violence.

The Jan. 6 attack on the U.S. Capitol and attempt to stop the democratic transfer of power through the formalized counting of electoral votes was the most public moment for the antigovernment movement since the Oklahoma City bombing in 1995. Of the over 700 people charged with offenses ranging from trespassing to seditious conspiracy for the actions on Jan. 6, at least 25 were members of identified antigovernment organizations.

Faced with greater scrutiny and deplatforming, antigovernment groups reorganized and were dispersed in communities focused on localized activities – a mainstay tactic of the antigovernment movement. Some local chapters of national organizations disbanded or unaffiliated, including chapters of Oath Keepers, the American Patriots Three Percent, III% United Patriots, the Three Percenters/III%ers, and the State of Jefferson Formation.

In the Southwest, antigovernment extremists set up camps in the desert engaging in vigilante activities including harassing migrants and humanitarian aid groups and coordinating with border patrol agents.

The antigovernment movement will look to expand upon the broad popularity of foundational ideas related to guns, government distrust and conspiracy theories. They will continue to capitalize on the current issues related to public health guidance, local school curriculum and practices, control of natural resources, claims of election fraud, immigration and national security. They will particularly seek to further mainstream their ideas and operationalize their power by running for office in large numbers from the local to federal level.

The movement will also seek to mitigate the damage to their brand in the wake of the Jan. 6 insurrection. Particularly, movement leaders will want to shift the media narrative and deflect legal, law-enforcement and public scrutiny. If historical trends are a guide, the movement could also see growth in response to federal government expansion and policy shifts under Biden.

Antigovernment groups are part of the antidemocratic hard-right movement. They believe the federal government is tyrannical and they traffic in conspiracy theories about an illegitimate government of leftist elites seeking a “New World Order.” Adherents and critics have in the past referred to this movement as the “Patriot” movement.

A particularly prominent conspiracy in the antigovernment movement – and one conspiracy propagandist groups often push – involves an effort to create a New World Order through a One World Government, often facilitated by the United Nations in order to institute communism/socialism and take away private property rights. Another conspiracy alleges that there are plans to merge the United States, Canada and Mexico into a single country. Other notable conspiracies include the idea that the federal government is secretly planning to round up citizens and place them in concentration camps run by the Federal Emergency Management Agency (FEMA). Fears of impending gun control or weapons confiscations, either by the government or international agencies, also run rampant in antigovernment circles.

These conspiracy theories identify grievances, both real and imagined, and demonize groups they deem responsible for them. Conspiracy propagandists offer simple answers to complex problems, but often stop short of offering a specific solution to the threats, instead hinting at actions to be taken by movement members while being careful to maintain plausible deniability. Groups including The John Birch Society, WorldNetDaily (WND) and InfoWars are crucial to the antigovernment extremist movement in that they help craft and nurture the very conspiracy theories that animate the movement’s activists.

The antigovernment movement has experienced waves of popularity, including the 1990s. In 1996, the year after the Oklahoma City bombing, 858 groups were documented active in the U.S. Timothy McVeigh, one of the Oklahoma City bombers, was motivated by extreme antigovernment beliefs then circulating in the militia movement. He was also inspired by the racist novel The Turner Diaries, modeling his attack on a scene from the book. The antigovernment movement of the 1990s, typified by the proliferation of militias, was fueled by a string of incidents, including the 1992 Ruby Ridge standoff, the 1993 Branch Davidian Waco compound siege and the 1996 Montana Freemen standoff. Other factors included the struggling economy in the early 1990s, particularly in Western states, and the election of President Bill Clinton, who was characterized by antigovernment activists as a liberal intent on seizing their weapons. Similarly, the in the last 2000s and 2010s the antigovernment was animated by the Tea Party movement, with both national and local groups mobilizing resentment around the economic challenges of the great recession and in opposition to the presidency of Barack Obama.

The Oath Keepers were founded in 2009 by Elmer Stewart Rhodes, a veteran army paratrooper, law school graduate and former Ron Paul congressional staffer. Like some antigovernment groups and activists such as Jack McLamb’s Police Against the New World Order, Oath Keepers primarily recruits current and former law enforcement, military and first-responder personnel, though they also accept civilians. Unlike many other militia groups that are local, geographically-based groups, Oath Keepers has a centralized hierarchical leadership and tiered structure at national, state and local levels.

Three Percenterism is one of three core components within the antigovernment militia movement, along with the Oath Keepers and traditional militia groups. The reference to 3% stems from the dubious historical claim that only 3% of American colonists fought against the British during the War of Independence.

The Oath Keepers, another core component of the militia movement, was founded in 2009 by Elmer Stewart Rhodes, a veteran army paratrooper, Yale Law School graduate and former Ron Paul congressional staffer. It primarily recruits current and former law enforcement, military and first-responder personnel, though it also accepts civilians. Unlike Three Percenterism, Oath Keepers was conceived as an organization with hierarchical leadership at national, state and local levels, one committed to establishing a network of activists it hopes will lay the groundwork for the creation of state militias. 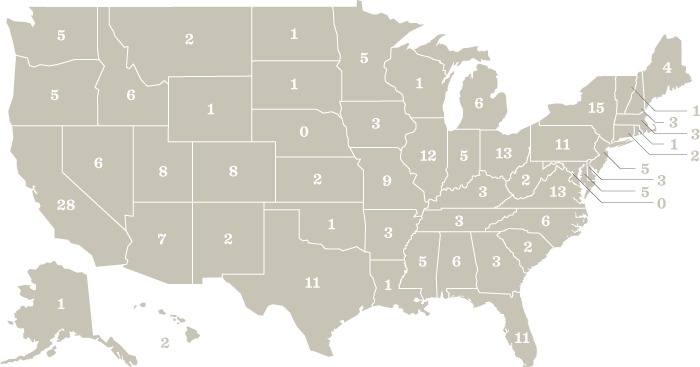 Center for Self Governance
Republic, WA

Institution on the Constitution (aka American View), The
Pasadena, MD*