Capping a life of crime, a Utah white supremacist is charged with murdering a corrections officer during an escape attempt

Read more on the Hatewatch Blog 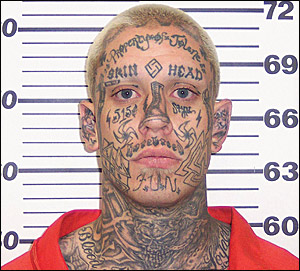 Racist skinhead Curtis Allgier was bad news from the start.

A year ago, the Salt Lake City area's Metro Gang Unit had already unofficially designated Allgier as "Public Enemy No. 1." That was based on his alleged threats to kill a law enforcement officer in retaliation for the fatal shooting by police of a fellow white supremacist, a lengthy criminal record, and what one officer described as Allgier's "nasty, intimidating" demeanor.

The tattooed words "Skin Head" and "Hatebreed" and images of Adolf Hitler and swastikas covering his face and body probably didn't hurt either.

So it wasn't a total surprise when the violence that law enforcement officials were worried about materialized on June 25. That day, Allgier, 27, allegedly shot to death a corrections officer who was transporting him to a local hospital for tests and then escaped before being recaptured in a local restaurant. Allgier's brief taste of freedom — starting with the murder of 60-year-old officer Stephen Anderson, a 22-year law enforcement veteran, and ending at the fast-food restaurant where he allegedly pistol-whipped an employee — lasted around 50 minutes.

That morning, Anderson had taken Allgier to the University of Utah Orthopedic Center for an MRI for back pain. As Anderson was exchanging Allgier's metal handcuffs, which can't be put through the MRI machine, for plastic FlexiCuffs, Allgier got hold of Anderson's gun. Anderson was shot twice, in the head and the chest, as he tried to prevent Allgier from escaping.

Allgier was charged with one count of capital murder, three counts of attempted aggravated murder, aggravated escape, disarming a peace officer, aggravated robbery, and the use of a firearm by a restricted person.

Was It Retaliation?
Allgier's alleged threats of retaliation against law enforcement stemmed from the May 27, 2006, shooting of white supremacist William "Billy" Maw by two Ogden City, Utah, police officers. Maw and his girlfriend were pulled over by a Utah state trooper for a traffic violation. As Maw exited the vehicle and began to run, officials say he reached under his shirt into his waistband and pulled out a gun. Maw was then shot and killed by the two Ogden City officers. 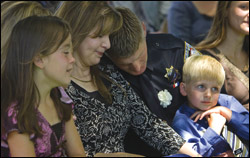 The other victims: Shawn Anderson mourns with his mother Mildred after the family was presented with a flag from atop the casket of murdered officer Stephen Anderson.

Maw was a member of the white supremacist Silent Aryan Warriors (SAW), according to Ogden City Police Lt. Loring Draper, an expert on Utah white supremacists. Formed in the 1990s in the Central Utah Correctional Facility, SAW is primarily a prison-based gang, with a governing council and other designated leaders, Draper said. Members are recruited and are active while in prison; SAW is not as organized on the outside. SAW members are known for their many violent acts while behind bars, especially those targeting non-white inmates. (The SAW emblem, or patch, is made up of an Iron Cross with a stylized swastika and lightning bolts in the middle and four death's heads in the corners; the slogan "Forever White Forever Proud," in German, encircles it all.)

Draper said that Allgier denied threatening to kill law enforcement officers to avenge Maw and claimed that he was not close to Maw and not a SAW member. He seemed to be an independent white supremacist with no affiliations, Draper said.

The events of June 25 were only the latest in a series of confrontations between Allgier and law enforcement. Just last November, he was a fugitive on a parole violation for two days before a Salt Lake City SWAT team arrested him at a local hotel. An armed Allgier barricaded himself for a time inside a room but was captured after he fell through the hotel's ceiling, where he had tried to hide.

Prison and Valknuts
Allgier's adult criminal record begins much earlier, with convictions for theft and reckless driving in his home state of South Dakota in 1998, when he was 19. In October 2000, he was charged with felony burglary, forgery and theft in Utah after he burglarized a neighbor's apartment and made out a stolen check to himself for $300. Later that month, he was charged in another county with carrying a concealed handgun and sentenced to 180 days and probation. He pleaded guilty to forgery and burglary in the earlier case and was sentenced to one year and probation.

Allgier fled the state in August 2001 after leaving a work release detail, which led to a one-to-15-year sentence. He was paroled in May 2003 but then was arrested and sent back to prison in July 2004 for leaving the state without authorization again, this time to California, and possessing two knives. After serving another 27 months in prison, he was paroled in October 2006. One month later, he had his encounter with Salt Lake City SWAT. On June 14 of this year, he was sentenced to 104 months in prison for being a convicted felon in possession of a firearm.

It was during his time in prison that Allgier, despite rules to the contrary, gradually acquired the tattoos that eventually covered his face and and body. Many of those tattoos are easily decipherable, like the numerals 14 and 88, both well-known white supremacist codes, or the images of Adolf Hitler. But there are others whose meaning is far more obscure, but just as telling to those in the know.

Prominently displayed along Allgier's right jaw are three intersecting triangles known as a valknut, or volknut. The valknut is seen by non-racist pagans as a symbol of Odin, the chief among the old Norse gods, and a sign of the afterlife and a binding of the soul to Odin. Among white supremacists, especially racist Odinists, the valknut signifies that the wearer is willing to give his life to Odin in battle. A commentator on the racist Stormfront Web forum explains: "The Valknut or 'Knot of the Slain' is the sign of Woden [Odin] symbolizing his power of binding and loosening, which is especially shown in the field of battle. The Valknut is worn only by those who choose to give themselves to Woden… [and signifies] that one is ready to be taken into the ranks of his chosen warriors at any time he chooses. It is a powerful symbol and one of which you should be fully aware of before you wear it."

The number 5150 is also displayed under Allgier's right eye. Mark Pitcavage, fact-finding director for the Anti-Defamation League, said that could be a reference to the section of the California Penal Code allowing people who are deemed to be a danger to themselves or others to be involuntarily committed to a hospital.