After being ordered to put down his weapon, Jesse Miller shot a police officer, who then shot Miller dead. 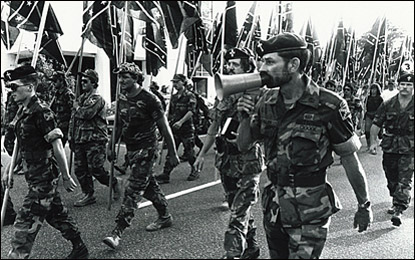 Glenn Miller (with bullhorn), who headed the White Patriot Party in the 1980s, frequently called for violence. Twenty years later, his son, Jesse, was killed after inexplicably opening fire on a would-be Good Samaritan and a police officer.

Frazier Glenn Miller, who once went to prison for refusing to shut down his paramilitary White Patriot Party, wrote in a blog post that he doesn't know why his son shot the "white man" who had pulled over to help him after a traffic accident.

But that didn't stop Miller from naming a scapegoat: the Springfield, Mo., Police Department.

The shooting was part of a bizarre string of events on March 28 that began with a car accident and culminated in the death of Miller's son, Jesse. Early that afternoon, an SUV driven by Jesse Miller, 30, hit a pick-up truck in Marionville, Mo. When Joseph M. Rich, 55, stopped to offer assistance, Jesse Miller killed him with a shotgun he had in his vehicle. Soon afterward, a Marionville, Mo., police officer arrived and ordered Miller to put down his weapon. Miller responded by shooting the officer, who then shot Miller dead. The officer, Andy Clark, suffered a non-life threatening shoulder wound.

The incident is under investigation by the Missouri Highway Patrol, but so far it's unclear why Jesse Miller shot Rich, whom he didn't know. Rich, whose nickname was "Big Mike," drove a small school bus that he'd converted into a traveling tattoo parlor.

In a long entry on the Vanguard News Network, a neo-Nazi online forum, 67-year-old Glenn Miller asserted that his son always carried at least one weapon because he was afraid of Springfield, Mo., police.

"The most important aspect regarding Jess's actions is his long fueds [sic] with the Springfield police department," he wrote. "Jess has lived there for 7-8 years now, and owns a home he purchased there about 3 years ago. Several years ago, he was beaten severely by 5-6 cops after he'd whipped a n----- in a fight in Springfield."

But Grant Story, public information officer for the Springfield Police Department, told the Intelligence Report there was no police report indicating that Jesse Miller ever had to be physically subdued by Springfield police. Nor was he aware of Miller getting into a fight with a black person.

Miller was known to Springfield police, however. He'd been involved in several assaults and disturbances over the past couple of years, Story said. On March 24, he was arrested and charged with domestic assault. The next day Miller went to the city's municipal building, where he complained to city attorneys that someone had kicked in his back door during the five hours he was in police custody. Though he'd never reported property damage, vandalism or attempted burglary, he wanted police to pay for the damage to the door.

Instead, police were called to City Hall, and Miller left the building, Story said. Three days later, a car accident on a Missouri road set in motion the chain of events that led to Miller's death.

Miller's father, Glenn, had his own violent past. His Carolina Knights of the Ku Klux Klan later became the White Patriot Party, one of the first hate groups to engage in paramilitary training. He went on the lam in 1986 after mailing a letter to 5,000 people calling for "total war" on federal agents, blacks and Jews. At the time, he had also violated a court order, stemming from a lawsuit filed by the Southern Poverty Law Center, that prohibited him from continuing to operate a paramilitary group. He was captured in Ozark, Mo., when authorities tear-gassed him from a mobile home.

After testifying against 14 leading white supremacists in a federal sedition trial in Arkansas, Miller served just three years in prison. However, he was reviled in white supremacist circles as a "race traitor" and, for a while, kept a low profile. Now he's making a comeback with The Aryan Alternative, a racist tabloid he's been printing since 2005.