Fueled by immigration fears, the economy, and the rise to power of a black president, hate groups in America rose again last year 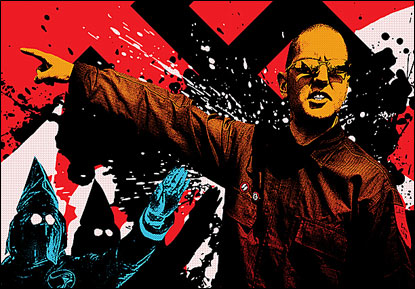 From white power skinheads decrying "President Obongo" at a racist gathering in rural Missouri, to neo-Nazis and Ku Klux Klansmen hurling epithets at Latino immigrants from courthouse steps in Oklahoma, to anti-Semitic black separatists calling for death to Jews on bustling street corners in several East Coast cities, hate group activity in the U.S. was disturbing and widespread throughout 2008, as the number of hate groups operating in America continued to rise. Last year, 926 hate groups were active in the U.S., up more than 4% from 888 in 2007. That's more than a 50% increase since 2000, when there were 602 groups.

As in recent years, hate groups were animated by the national immigration debate. But two new forces also drove them in 2008: the worsening recession, and Barack Obama's successful campaign to become the nation's first black president. Officials reported that Obama had received more threats than any other presidential candidate in memory, and several white supremacists were arrested for saying they would assassinate him or allegedly plotting to do so.

At the same time, law enforcement officials reported a marked swelling of the extreme-right "sovereign citizens" movement that wreaked havoc in the 1990s with its "paper terrorism" tactics. Adherents are infamous for filing bogus property liens and orchestrating elaborate financial ripoffs.

Somewhat surprisingly, it wasn't just the usual suspects from the white supremacist underworld who sought to exploit the country's economic turmoil and political strife. A key 2008 hate group trend was the increasing militancy of the extremist fringe of the Hebrew Israelite movement, whose adherents believe that Jews are creatures of the devil and that whites deserve death or slavery.

These radical black supremacists have no love for Barack Obama, calling him a "house n-----" and a puppet of Israel. They preach to inner-city blacks that evil Jews are solely responsible for the recession. The rhetoric of white-skinned hate group leaders in 2008 was equally alarming. Last September, for example the cover of National Socialist magazine depicted then-presidential nominee Barack Obama in the crosshairs of a scope, with the headline "Kill This N-----?"

What follows is a detailed look at the three most active and dangerous white supremacist hate group sectors in 2008: Ku Klux Klan groups, neo-Nazis, and racist skinheads.

KU KLUX KLAN
Ku Klux Klan groups
Reversing a generally declining trend since 2000, Klan groups in the U.S. increased significantly in 2008, from 155 chapters to 186. Seventeen new chapters belong to the Brotherhood of Klans Knights of the Ku Klux Klan (BOK), which during the past five years has grown into the largest Klan organization in the country. In 2008, the Marion, Ohio-headquartered BOK launched a handful of chapters in Canada, linking up with the Aryan Guard, a fast-growing white nationalist group based in Alberta.

A smaller but likewise rapidly expanding Klan group, the United Northern and Southern Knights of the Ku Klux Klan, which in 2007 absorbed the National Aryan Knights, more than doubled its number of chapters and tripled its geographic reach last year, going from 11 chapters in eight states to 24 chapters in 24 states.

The continued rise of the United Northern and Southern Knights and the BOK paralleled the decline of the Imperial Klans of America (IKA). Since 2005, the IKA has shriveled from 39 chapters in 26 states to just six chapters in five states. Last year, it suffered a crippling blow when a Meade County, Ky., jury delivered a $2.5 million judgment against members of the IKA, including $1 million against IKA leader Ron Edwards, in a lawsuit brought by the Southern Poverty Law Center on behalf of a mixed-race teenager who was assaulted by IKA thugs in Kentucky.

Beyond the IKA trial, the biggest Klan story for the mainstream media in 2008 was the murder of a 43-year-old Tulsa, Okla., woman during a backwoods Klan initiation ritual near Bogalusa, La. According to law enforcement investigators, the victim was recruited over the Internet to join the Sons of Dixie, a tiny KKK faction led by Raymond "Chuck" Foster. Foster allegedly shot the woman in the head after she changed her mind about joining the Klan.

Blipping on the media's radar last December was the National Knights of the Ku Klux Klan, whose imperial wizard, Ray Larsen, called for all Klansmen "worldwide" to wear black armbands and fly the American flag upside down on Jan. 20, the day of Barack Obama's inauguration.

NEO-NAZIS
Neo-Nazi groups
A slight drop in the number of neo-Nazi chapters last year from 207 to 194 was attributable largely to the dissolution of National Vanguard after its leader, Kevin Alfred Strom, was convicted in January 2008 on child pornography charges. (Strom was released last fall after serving prison time.)

When the seven-count federal indictment came down, White was already jailed in Chicago on separate charges. He was arrested last October and extradited from Roanoke, Va., where he owns apartments in black neighborhoods, to face a federal obstruction of justice charge for allegedly threatening the foreman of a Chicago jury that convicted neo-Nazi leader Matt Hale in 2004 of soliciting the murder of a federal judge. Still, despite White's legal and personal financial turmoil (he declared bankruptcy last June), the ANSWP grew last year from 30 chapters in 26 states to 35 chapters in 28 states, making it the second-largest neo-Nazi organization in the country, after the National Socialist Movement (NSM).

Apart from its usual literature dispersals, book burnings, swastika lightings, and its annual "Hated and Proud" hate rock festival, the NSM in 2008 targeted Latino immigrants with sizable "illegal invasion" protests in Washington, D.C., and Omaha, Neb. Subjected for years to movement ridicule for their brown-shirt uniforms, NSM national and state chapter leaders also voted at the group's National Congress last April to switch to "more militant looking" black BDUs (Battle Dress Uniforms). Even with the makeover, the NSM lost 30 chapters last year (it later added 26, for a net loss of six chapters) after leader Jeff Schoep abandoned his family and relocated NSM headquarters from Minneapolis to Detroit in January 2008, reportedly to move in with a new girlfriend of dubious Aryan purity.

Nevertheless, the NSM benefited from diminished competition as the formerly dominant National Alliance continued its long decline, shrinking to 11 chapters in nine states. Similarly, Aryan Nations, another one-time powerhouse, withered to 11 chapters in 10 states. White Revolution gained no ground, ending the year as it began with a dozen chapters.

Two upstart neo-Nazi groups emerged in 2008. The League of American Patriots, which held its inaugural meeting last March 29, appears to be comprised of former National Vanguard members. The second newcomer, Knights of the Nordic Order, was founded by "two former captains of the Aryan Brotherhood," a notorious white supremacist prison gang, according to its website.

RACIST SKINHEADS
Racist Skinhead groups
The total number of racist skinhead crews, driven by the addition of a couple of new organizations, rose from 90 in 2007 to 98 last year.

Relatively inactive in 2007, Hammerskin Nation, long a force to be reckoned with in the racist skinhead subculture, came back in a big way in 2008. The diminished tally of Hammerskins chapters (which dropped from 15 to 12) is misleading, as it represents the merging of smaller chapters and Hammerskin leaders weeding out weaker outfits, rather than a real drop in the organization's strength and membership. On the contrary, the Hammerskins last year stepped up recruiting while forging new bonds with other skinhead groups and hosting dozens of hate rock concerts, white power cookouts, Mixed Martial Arts prizefight viewing parties and other widely promoted events.

Last December, more than 100 skinheads from at least five states gathered in Florida for a "Martyr's Day" party, co-sponsored by CHS, Volksfront and American Front, that featured a keynote address phoned in from prison by Richard Kemp, a member of the white supremacist terrorist group The Order. Martyr's Day commemorates the 1984 death of Order founder Bob Mathews, who died in a shootout with the FBI.

Another noteworthy development in the skinhead sector was the severe weakening of the Vinlanders Social Club (VSC), a skinhead coalition that began in 2003 and grew to become Hammerskin Nation's primary rival. Plagued by infighting, criminal prosecutions and desertions, the Vinlanders made no public appearances in 2008, limiting their activities to private beer bashes. Three inner-circle Vinlanders, including co-founder Eric "The Butcher" Fairburn, were convicted last year of a March 2007 racially motivated attack on a homeless black man in downtown Indianapolis. At his sentencing hearing last August, Fairburn publicly renounced the skinhead movement.

Formerly aligned with the VSC, the Keystone State Skinheads (KSS) distanced their group from the Vinlanders, changed their name to Keystone United and recast themselves as media-friendly "pro-white" activists. Keystone mouthpiece Keith Carney denounced hooliganism in several newspaper and television interviews. Last October, the group held a "Leif Ericson Day Celebration," honoring the Viking explorer, in a Philadelphia public park on the banks of the Schuylkill River. In contrast to the screaming hate rock performed by Absolute Terror and Total War at the annual Keystone-sponsored "Uprise" concert in January 2008, which was held in a secret location, Celtic folk musicians provided entertainment at the two-faced crew's "family-friendly" event.

In contrast to KSS, the United Society of Aryan Skinheads (USAS) made no effort to revamp its image in 2008. Formed in recent years inside California's state prison system, the USAS continues to espouse white-power skinhead ideology and grow into a strong presence throughout Southern California as members are paroled. The USAS went from a single chapter in 2007 to nine chapters in 2008, including three separate crews in San Diego, the group's base of operations in the outside world. Though populated almost entirely by ex-cons, the USAS, unlike most prison-based white supremacists, actually maintains a powerful racist identity and rarely compromises principles in favor of criminal profits.

One major new racist skinhead group surfaced in 2008: the Supreme White Alliance, or SWA. Co-founded by Kentucky skinhead Steven Edwards, son of Imperial Klans of America leader Ron Edwards, the SWA by year's end boasted eight chapters in as many states, an active website and a substantial online presence on MySpace as well as on the white nationalist social networking site New Saxon. The group's vice president is former IKA member Jarred Hensley, who served more than a year for his role in the hate crime assault that led to the SPLC lawsuit. "Out of prison and back on the streets," Hensley posted on MySpace last July upon his release. "It's gr88 to be a Skinhead!" Last October, former SWA probate Daniel Cowart was arrested in Tennesee with another skinhead he met online for allegedly plotting to assassinate Barack Obama after killing 88 black students (88 is neo-Nazi code for the phrase "Heil Hitler"). The SWA claimed that Cowart had been kicked out prior to hatching the plan.