From the place long known as 'Sin City,' a wealthy benefactor has been quietly funding a series of radical-right organizations. 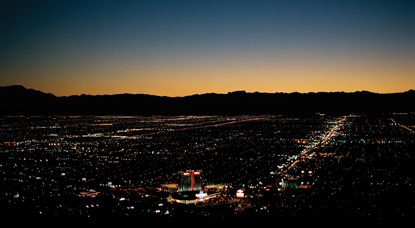 The Institute for Historical Review, the Holocaust-denying hate group created in 1978 by anti-Semitic patriarch Willis Carto, has had few better friends over the past decade than a Las Vegas resident named James Edward McCrink. A foundation created and controlled by McCrink gave the institute at least $10,000 a year from 2001 through 2007 — $137,000 altogether, according to the foundation's annual reports to the Internal Revenue Service.

McCrink, who typically distributes $125,000 to $200,000 each year to various causes through his Do Right Foundation, is a low-profile bankroller of more than a dozen far-right organizations, including several that, like the Institute for Historical Review, are in hate-group territory. Since 2001, his foundation has also given $37,000 to the white nationalist New Century Foundation, whose leader, Jared Taylor, wrote recently: "When blacks are left entirely to their own devices, Western civilization — any kind of civilization — disappears."

With assets of $3.8 million in its latest filing to the IRS, McCrink's foundation is not a huge player in the nonprofit world. But many of the organizations it supports are small enough for Do Right's contributions to account for a significant chunk of their income. In the case of the Institute for Historical Review, for example, McCrink's 2005 contribution of $25,000 accounted for 8.6% of the group's total revenue ($290,332) for the year.

McCrink's IRS reports also indicate that he cut off his giving to certain extremist groups after supporting them for a year or two. In 2001 and 2002, he gave a total of $25,000 to Louisiana's New Christian Crusade Church, whose pastor, James K. Warner, helped found the American Nazi Party and had close ties with KKK leader David Duke. The church embraced a theology known as Christian Identity, whose adherents believe that whites of European descent can be traced back to the biblical lost tribes of Israel; that Jews are the literal offspring of Eve and Satan; and that non-whites are soulless "mud people" created as "beasts of the field." The Do Right Foundation's reports show no contributions to the church since 2002.

The foundation also made a one-time 2006 contribution of $1,000 to the white nationalist Council of Conservative Citizens, a St. Louis-based group that says in its Statement of Principles that it "oppose[s] all efforts to mix the races of mankind," has described blacks as a "retrograde species of humanity," and once ran a photographic comparison of pop singer Michael Jackson and a chimpanzee.

Reached by phone at his home, McCrink, 60, told the Intelligence Report that he has soured on the Institute for Historical Review and the New Century Foundation, which publishes the racist American Renaissance magazine. "I don't support them much anymore," he said. "They no longer fit into the Do Right Foundation's plan." When told that the Southern Poverty Law Center lists them both as hate groups — the Institute for Historical Review for its Holocaust denial and anti-Semitism and New Century Foundation for its racism — McCrink said, "I came to the same conclusion. Some of the things they do I don't think it best for the Do Right Foundation to support."

The interview was brief. McCrink said that he values his privacy and that it was "not pertinent" to discuss how he made his money or how he chooses which organizations to support. "That's apparent on our website," he said. Do Right Foundation's reports for 2008 and the current year are not yet available, so it was not possible to determine how much, if at all, McCrink has actually scaled back his support of the two groups. McCrink did not volunteer details.

The foundation's mission statement, found on its website doright.org, says its goal is to "help mankind create a more joyful society. … We promote respect for God and all His creations; family unity; limited government; private property; free enterprise and the rule of righteous law." Among its aims, it says, is "championing that which was intended by the anti-Federalist, Christian founders of our country."

Where the mission statement is only suggestive of McCrink's interests, the list of recipients of Do Right's money makes matters clearer. A few are charities that serve the needy — the Salvation Army, a group that helps homeless youth in Chicago, another that helps paralyzed veterans, and several devoted to multiple sclerosis treatment and research. The majority, however, are engaged in legal, political or religious activities associated with the far right. They include:

The foundation has also given sizeable chunks of money to more mainstream conservative organizations like the Pacific Legal Foundation, the Alliance Defense Fund, the Catholic Family and Human Rights Institute, and Liberty Counsel.

Do Right's most recent filings suggest that McCrink is targeting a new foe: science. He has begun giving — $11,000 in 2006 and 2007 — to the Discovery Institute, a think tank that promotes the teaching of "intelligent design" in schools. Intelligent design is the religious right's latest challenge to evolution, the theory all but universally accepted by scientists that plants and animals developed from earlier life forms. The American Association for the Advancement of Science and the National Science Teachers Association dismiss intelligent design as "pseudoscience." The Discovery Institute, The New York Times reported in 2005, is "the ideological and strategic backbone behind the eruption of skirmishes over science in school districts and state capitals across the country." Do Right also gave $13,000 in 2006 and 2007 to Access Research Network, another intelligent design advocate.