An aging neo-Nazi, apparently seeking death in a blaze of glory, is accused of killing a guard at the U.S. Holocaust Museum 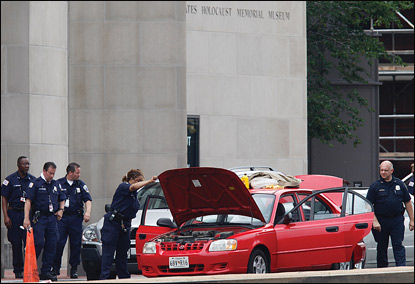 If nothing else, neo-Nazi James von Brunn gained one thing from walking into the United States Holocaust Memorial Museum in Washington, D.C., on June 10, where he allegedly shot and killed a security guard: attention. Even at 88, von Brunn still yearned for an audience for his virulent screeds.

The ardent anti-Semite lamented that his one grand gesture earlier in life — a thwarted 1981 plan to take members of the Federal Reserve Board hostage and make a televised speech — was all but ignored.

"There was no media coverage of my trial," he complained once in a letter to a friend. "I personally visited D.C. newspaper editors and wrote major networks inviting coverage."

Even right-wing ideologues failed to acknowledge his bold move, von Brunn said. He wrote once of calling his "Aryan genius" friend, Ben Klassen, founder of the white supremacist Church of the Creator, only to learn that Klassen was unaware that von Brunn had been in prison the previous 5 1/2 years. Right-wing leaders ignored him as too politically incorrect, he groused. "My trial was not mentioned in their publications or discussed at their meetings," he wrote.

With his arrest in the murder of security guard Stephen T. Johns, 39, von Brunn finally drew international attention. He had made good on a vow once made to his second ex-wife to go out with his boots on. "I took it to mean that he was going to go out and try to take some people with him," she told the New York Daily News. After Johns was shot, other guards immediately fired at von Brunn, who survived a shot to the face. He was charged with murder.

It also was in the nation's capital where von Brunn was arrested in December 1981 after he carried a sawed-off shotgun, a pistol and a hunting knife into the Federal Reserve, where he hoped to make a citizen's arrest of the Board of Governors and "read to the American public my indictment on these treasonous liars" on television. He was convicted of attempted kidnapping and other charges by a "Negro jury" and "a Jew judge," he wrote later, and sentenced in April 1983 to a term of up to 11 years in prison. He was released in 1989.

In the ensuing years, von Brunn wrote anti-Semitic diatribes on his website, holywesternempire.org, and self-published a book, Kill the Best Gentiles! His hatred of the Federal Reserve and Jews never waned. In a May 2007 posting on the message board of an ultra-right, conspiracy-obsessed message board, von Brunn wrote: "The FED is a JEW controlled, PRIVATE corporation. JEWS create wars to divide and conquer. AMERICA'S MASS MEDIA is in JEW hands. … JEWS control your mind."

About 12:44 p.m. on June 10, the octogenarian double-parked his 2002 red Hyundai in front of the Holocaust museum, approached the building and allegedly shot Johns as he opened the door for him. Officers searching his car later found .22-caliber ammunition and a notebook with a list of other possible targets that included the White House, the Capitol and the National Cathedral. The notebook, police said, also contained handwritten notations including this one: "You want my weapons — this is how you'll get them. The Holocaust is a lie. Obama was created by Jews. Obama does what his Jew owners tell him to do." Von Brunn also included the address of his website.

At the apartment he shared with his son and the son's fiancée in Annapolis, Md., investigators discovered a painting that appeared to depict Hitler and Jesus, a 30-30 rifle, ammunition and a handwritten will. They also found child pornography in his computer.

Shortly before the museum shooting, von Brunn transferred the domain name of his website to a Michigan man with the E-mail address of "steveo1488". In white supremacist circles, 14 refers to the "14 Words" slogan made popular by the late neo-Nazi David Lane: "We must secure the existence of our people and a future for White children." The letter H is the eighth letter in the alphabet, and so 88, among neo-Nazis, stands for "Heil Hitler."

In one sense, von Brunn didn't fit the image of a killer. He was, after all, 88 years old. On the other hand, he had expressed his hatred of Jews and blacks for at least four decades. In the early 1970s, he worked briefly for Noontide Press, a publishing arm of the anti-Semitic Liberty Lobby, which along with the Holocaust-denying Institute for Historical Review, was founded by Willis Carto. In his own book, von Brunn wrote, "JEWISH strategy was to infiltrate the institutions of Western Culture and destroy them. JEWRY'S primary weapon was money manipulation and USURY."

He was friends with Klassen, a neo-Nazi who also invented the electric can opener, and he painted a portrait of the late John Crommelin, an infamous white supremacist and U.S. Navy admiral. Von Brunn also lived briefly a few years ago in Hayden, Idaho, with a racist activist named Stan Hess, who, among other things, had been involved with the European-American Unity and Rights Organization led by ex-Klansman David Duke.

The son with whom he lived, Erik von Brunn, expressed sorrow for the dead security guard and his family. "The man is 88 years old. I never would have thought he could do this," he said. Von Brunn had another son, who died in 2007.

The Holocaust Museum shooting, along with the murder of abortion physician George Tiller 10 days earlier, followed an April report by the Department of Homeland Security that had warned of a resurgence of the radical right. That report had been pilloried by right-wing pundits like Rush Limbaugh and the Republican Party as an attack on conservatives, but looked prescient in the aftermath of the killings in Washington and Kansas. That is no doubt why so many right-wing commentators rushed, improbably, to describe von Brunn as a leftist.

Limbaugh said von Brunn hated both Bushes and neo-cons. "This guy's beliefs, this guy's hate, stems from influence that you find on the left, not on the right." Cliff Kincaid of the far-right Accuracy in Media wrote that von Brunn's "anti-Semitic views are shared by some of the political left, even those backing and very close to Obama himself." Right-wing columnist Michelle Malkin claimed that von Brunn "railed against Fox News and Rupert Murdoch."

While it seems ludicrous to suggest that von Brunn was a product of the left, he did express contempt for right-wing pontificators. "The American Right-wing with few exceptions is totally Pacifist," he once wrote. "The [right wing] does NOTHING BUT TALK. MORAL: America dies for want of men."

The radical, racist right was kinder to von Brunn. The neo-Nazi Vanguard News Network (VNN) website — whose masthead reads "No Jews. Just Right" — quickly offered up the first six chapters of von Brunn's book free. Podblanc, a particularly violent white supremacist video-sharing website, also posted a link to the book. And while many of his fellow racists said von Brunn had hurt their cause or denounced him for failing to actually murder any Jews, others hailed him as a hero.

"God Bless James von Brunn," wrote "banjo_billy" on VNN. "He showed us what we all need to be doing everyday. There are lots of Jews out there who require a thrashing and/or a Final Solution." Added "Fiotheth" in the same forum: "Von Brunn is a Freedom Fighter to be Hailed!"