The U.S. Justice Department has opened a civil rights investigation into the case of two white youths acquitted of slaying a Mexican immigrant by an all-white jury in Pennsylvania. Many observers described the verdict as a blatant act of jury nullification, akin to past cases in which all-white juries in the Deep South delivered not guilty verdicts in the murders of civil-rights activists despite what was sometimes incontrovertible evidence.

The Schuylkill County, Pa., jury found high school football stars Brandon Piekarsky and Derrick Donchak not guilty of homicide, ethnic intimidation and aggravated assault in the July 2008 beating death of Luís Ramirez in Shenandoah, Pa., where the Latino population is growing rapidly. Both were convicted of simple assault and could face one- to two-year prison terms.

The jury heard testimony that Ramirez, a 25-year-old father of two, was attacked by six white teenagers who yelled racial epithets as they knocked him to the ground, beat him unconscious and then repeatedly kicked him in the head. Defense attorneys claimed that Ramirez started the fight and that Piekarsky and Donchak had merely fought back in self-defense. But prosecutors said the teens were the aggressors, with Piekarsky delivering the fatal kick to Ramirez. 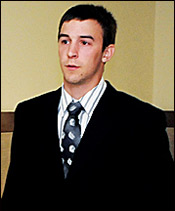 "Common sense dictates that … football players were unlikely to have been threatened by Ramirez," Mexican-American Legal Defense and Education Fund (MALDEF) spokeswoman Gladys Limon told CNN. "Yet it seems prejudice overruled reason in this case, and that the life of a Mexican immigrant who was fatally beaten by white 'kids' was deemed subhuman."

During his closing argument, the prosecutor in the case showed the jury a photograph of Donchak taken at a Halloween party about three months after Ramirez was killed. It shows Donchak dressed up as a U.S. Border Patrol agent. He was mocking Ramirez's death, the prosecutor argued.

The jury selection process indicated it was going to be tough to obtain a conviction in Schuylkill County, where the population is 96.6% white and just 1.1% Latino, according to the U.S. Census Bureau. A dozen potential jurors were dismissed after they admitted they couldn't be impartial in a case involving a Latino immigrant. "If they weren't here illegally, it wouldn't have happened," said one woman who was excused. Asked by the judge what she knew about the case, the woman said, "Some boys picked on a Hispanic man and he was accidentally killed. ... I don't think they meant to kill him."

Calling the verdict a "glaring injustice," MALDEF's Limon warned of the message it sends: "That Latino immigrants can be brutally beaten without any consequence to those who commit the crimes."

Ten days after the verdicts, The New York Times reported that racial tensions in Shenandoah had intensified after the trial, with threats, vandalism and fights on the rise. Meanwhile, civil rights activists cheered news of the Justice Department's probe of Ramirez's death and of the way local authorities handled the case.

"This case is not just about what happened to Luís; it's about what Latinos nationally are facing," John Amaya, a staff lawyer with MALDEF, told the newspaper. Amaya pointed to federal statistics that show a 40% increase in hate-motivated attacks on Latinos between 2003 to 2007.

Though it has received far less media attention, the recent murder of Mexican immigrant Evaristo Ramirez Ventura may be another example of what Limon termed "the wave of hate crimes against Latinos."

Ventura, 25, was arrested Feb. 26 in Sacramento, Calif., on suspicion of drunk driving. Later that day, he was placed in a holding cell with a man who'd been charged with a racially motivated assault on a Latina woman. Shortly thereafter, Ventura was allegedly beaten and strangled with a T-shirt by the cell's only other occupant.

"This was a hate crime," said Al Rojas of the Sacramento Chapter of the Labor Council for Latin American Advancement, which represents the interests of Latino workers. "Had [Ventura] not been an undocumented worker, he would be alive today."