It's no surprise that this spring's swine flu outbreak provided a bonanza for immigrant bashers eager to exploit fears of a potentially dangerous virus that may have originated in Mexico.

But even by nativist standards, the torrent of racist and conspiracy-minded comments was impressive. From anti-immigrant leaders to mainstream talk show hosts, propagandists vilified Mexican immigrants as disease-carriers who were spreading the virus because of their poor hygiene. Often, the rhetoric got downright ugly.

"So now, in addition to venereal disease and the other leading exports of Mexico — women with mustaches and VD — now we have swine flu," proclaimed right-wing Boston radio host Jay Severin. "We should be, if anything, surprised that Mexico has not visited upon us poxes of more various and serious types already, considering the number of criminaliens [sic] already here." Severin also called Mexican immigrants "leeches" and "primitives" and told a caller that emergency rooms have "become essentially condos for Mexicans." He was suspended indefinitely from his afternoon show on WTKK-FM.

And nationally syndicated radio show host Michael Savage told listeners that they'd be risking their lives to eat at a restaurant with undocumented workers, according to Media Matters for America, a monitoring group. "Go ahead, idiot," he said. "Go ahead, go and eat in a restaurant now with illegal aliens all over the kitchen, and you don't know if they were in Mexico yesterday or two days ago because your wonderful government doesn't give a rat's behind who's in the kitchen or whether they wiped their behind with their hands."

The swine flu rants were the latest onslaught of demonizing rhetoric aimed at immigrants with brown skin — rhetoric that has coincided over the past several years with an apparently dramatic increase in hate crimes targeting Latinos.

Although the virus has so far been less deadly than some experts had feared, it showcased just how far nativists were willing to go to blame immigrants for a public health problem.

"This is a pattern we see again and again," Amy Fairchild, chairwoman of sociomedical sciences at Columbia University's Mailman School of Public Health in New York City, told MSNBC.com. "It's 'the other,' the group not seen as part of the nation, the one who threatens it in some way, that gets blamed for the disease." 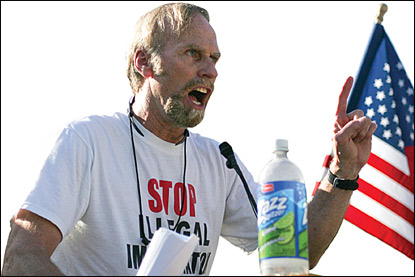 In fact, as New Scientist reported, the kind of swine flu responsible for this spring's outbreak was first seen in the United States in 1998.

But facts generally didn't get in the way of the vitriol. "9/11 didn't convince the open-borders zealots to put down their race cards and confront reality," blogged syndicated columnist Michelle Malkin. "Maybe the threat of their sons or daughters contracting a deadly virus spread from south of the border to their Manhattan prep schools will." Never mind that officials believe a spring break trip to Cancun led to the infections among high school students in New York City.

Also pointing fingers was Chelene Nightingale, former managing director of the California hate group Save Our State. "Dr. Madelyn [sic] Cosman (resting in peace) was right!!!!!" she crowed in an E-mail. The late Madeleine Cosman, who had no medical training, was the immigrant-bashing propagandist who at major anti-immigrant conferences referred to Mexican immigrants as pathogen-ridden "deadly time bombs" and rattled off a host of illnesses they'd supposedly brought to the United States. She was the source of a myth about immigrants and leprosy that was presented as fact in 2007 on CNN's "Lou Dobbs Tonight."

The leader of the California Coalition for Immigration Reform (CCIR) chimed in with a mass E-mail to her supporters. "As many Christians have often spoken, 'The Lord Works in Mysterious Ways,'" wrote Barbara Coe, whose CCIR is listed by the Southern Poverty Law Center as a hate group. "Wouldn't it be even MORE interesting if some of the anti-American-pro-illegal alien AMNESTY traitors (posing as U.S. elected officials) who just visited Mexico, also contracted the disease and shared it with THEIR loved ones? We wonder if they would still vote for 'Open Borders?'"

And Jackie Juntti, the self-described "Grassroots Granny" who runs a particularly hard-line nativist E-mail list, called for sealing the border, then took a racist jab at President Obama.

"At this same time we have government refusing to close the borders (how did that Mexican kid get from Mexico to Houston to die this week? — he crossed the border!!!) or to halt all visits to Mexico by Americans. We have [Obama] telling us to cover our mouth if we cough. Someone should cover his lying lips with gorilla glue."

"Whether it's Dengue Fever, now in Florida, Hemorrhagic Fever coming up from Texas border towns or E-coli intestinal parasites arriving with illegal migrants from Mexico daily, every American citizen faces these forms of bio-terrorism," he wrote. "The Department of Homeland Security presents Americans with color coded 'alert' levels from Al Qaeda, but that doesn't protect us from a mounting invasion from an 'unarmed army' of disease carrying illegals that exceed 9/11 in mortality results." Wooldridge offered no evidence for his mortality claim. 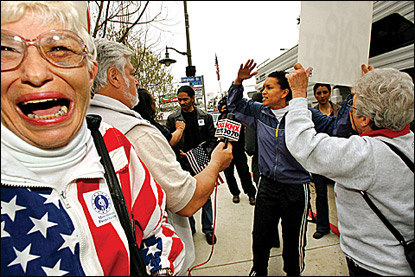 Barbara Coe, leader of the California Coalition for Immigration Reform

Also jumping on the terrorism bandwagon was talk radio's Savage, who suggested that Mexican immigrants were being used as biological weapons. "Could this be a terrorist attack through Mexico? Could our dear friends in the radical Islamic countries have concocted this virus and planted it in Mexico knowing that you, [Homeland Security Secretary] Janet Napolitano, would do nothing to stop the flow of human traffic from Mexico? And they are a perfect mule — perfect mules for bringing this virus into America."

Not to be outdone, Neal Boortz spouted a similar conspiracy theory on his nationally syndicated radio show, Media Matters reported. "What better way to sneak a virus into this country than give it to Mexicans?" he asked. "So if you want to get that epidemic into this country, get it going real good and hot south of the border. And, you know, then just spread a rumor that there's construction jobs available somewhere, and here it comes."

Boortz also called the swine flu the "fajita flu." But it's not just immigrant-bashers who sought to capitalize on swine flu hysteria. The antigovernment conspiracy theorists at InfoWars.com noted ominously that "UN Secretary-General Ban Ki-moon stoked the fear of a global flu pandemic. He said the Mexican flu outbreak is the 'first test' of the 'pandemic preparedness work undertaken by the international community over the past three years.'"

The obvious conclusion to be drawn?

"Ki-moon, the United Nations, and the globalists, with the participation of the globalist-dominated corporate media and the ruling elite in Mexico, are hyping the flu outbreak as a possible pandemic in order to sell us their scheme for world government."

It's all so clear now.