Nine members of the Hutaree Militia were arrested in late March and charged in a plot to make homemade bombs and murder scores of law enforcement officials.

Nine members of the Hutaree Militia, a self-described "Christian" group with chapters in Michigan and Utah, were arrested in late March and charged in a plot to make homemade bombs and murder scores of law enforcement officials in hopes of sparking a larger uprising against the federal government.

The Hutaree website says its name means "Christian warrior" and describes its mission as "[p]reparing for the end time battles to keep the testimony of Jesus Christ alive." According to an indictment, the Hutaree members, eight men and a woman, planned to kill a random police officer in Michigan. When other law enforcement officers gathered for the funeral, the militia members planned to kill them with improvised explosive devices, authorities allege. Members would then flee to "rally points" protected with trip-wired explosives, from where they would sally forth to do further violent battle with law enforcement. A federal prosecutor said that the group believed it was about to go to war with what it described as "the brotherhood" — local, state and federal law enforcement officers. 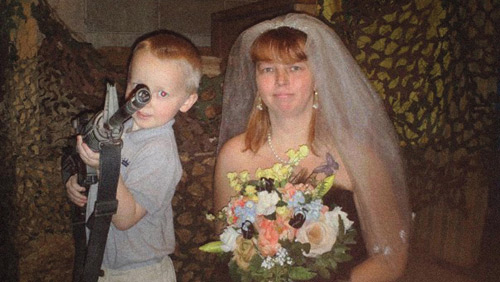 Members of the Hutaree Militia, nine of whom have been charged in an alleged plot to murder police officers, had a fondness for weaponry that bordered on the obsessive.

Defense lawyers maintained that the group was all talk that was protected under the First Amendment.

At Hutaree's rural southeast Michigan headquarters — also the home of its reputed leader David Brian Stone — authorities seized materials that can be used to make explosives, and instructions on how to build bombs. They also confiscated gas masks, knives, machetes, swords and body armor. Stone's wife and two sons also were arrested and charged in the case.

At the Sandusky, Ohio, home of Kristopher Sickles, investigators took substances believed to be crack cocaine and steroids. Sickles is alleged to have said in the presence of the undercover federal agent that he had killed his cat with a handgun to see if he "could kill something I had a feeling for."

And at Thomas Piatek's home in Whiting, Ind., agents took a copy of a Hitler tract and an audio of The Turner Diaries, the race war novel written by the late neo-Nazi leader William Pierce. Also confiscated: a samurai sword and a jeweled dagger, according to search warrant records.

The Hutaree's members apparently became agitated in December 2008 when federal Bureau of Alcohol, Tobacco, Firearms and Explosives agents began scrutinizing the records of a Michigan gun dealer named William Priest. David Stone was an occasional customer of Priest and bought components of semi-automatic AR-15 rifles from him, according to authorities.  "Looks like the ATF enforcers are looking for a reason to start a firefight," David Stone allegedly wrote in an E-mail at the time. "And we will answer the call."