The 'lighter' side of the world's most infamous Nazi death camp, courtesy of The Barnes Review

You probably thought you knew a thing or two about Auschwitz: It was a nightmarish Nazi extermination camp in Poland where more than 1 million people were murdered, most of them gassed to death with Zyklon-B and then cremated. Dr. Josef Mengele performed horrible medical experiments on live humans there, including twins and those with blue eyes. At the end, as the Soviets closed in, the SS guards murdered thousands more as they marched starving survivors west.

But Carolyn Yeager wants to set the record straight.

The aim of the thoughtful Germans who ran the place actually was “reform, re-education and rehabilitation.” Inmates were taught trades there. Townspeople in the surrounding area saw life at Auschwitz as “luxurious,” what with the inmates’ “attractive red-brick sleeping quarters,” complete with “bunk beds with mattresses … flush toilets, porcelain-covered stoves for cozy heating, and double-paned casement windows.” The paths were “tree-lined,” there were flowers planted before every barracks, and the Nazis regularly showed movies to the inmates. 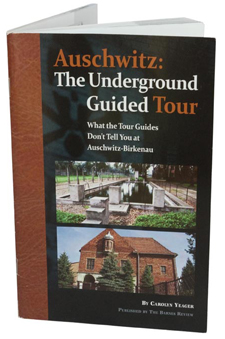 Yes, Auschwitz had an art museum, a library, regular concerts and sporting events, a “theater for music and drama,” a swimming pool (sometimes used for water polo) and a brothel for lonely inmates — all round, as Yeager writes, “a flourishing cultural life.” It also had two fine post offices because “the Geneva Convention rules, strictly followed by the Germans, ensured the sending and receiving of mail by all prisoners.” Why, the kindly SS guards even provided special pre-printed cards and letter forms! And their health care system was world class — after all, for the Nazis, “the health of the labor force was a prime concern.”

This, at least, is the view of Carolyn Yeager, a woman of leaden stupidity who took a walking tour of Auschwitz last year and decided that the accounts of thousands of victims, perpetrators, camp liberators and Nazi officials including Auschwitz’s most infamous commandant were all hogwash — a transparent ploy by post-war propagandists to say ugly things about caring Germans.

Her comments are brought to us courtesy of The Barnes Review, America’s leading Holocaust denial journal and a gathering point for anti-Semites and Nazi sympathizers from around the country. They were published earlier this year in a slick, 48-page booklet entitled, Auschwitz: The Underground Guided Tour: What the Tour Guides Don’t Tell You at Auschwitz-Birkenau.

It’s true! As this author can attest after two lengthy tours of Auschwitz and its adjoining Birkenau camp since 1988, the guides will tell you none of this.

Perhaps that’s because it’s all false. Long-time Auschwitz commandant Rudolf Hoess, in the autobiography he wrote shortly before his execution, described how Heinrich Himmler in 1941 “himself gave me the order to prepare installations at Auschwitz where mass exterminations could take place,” and then detailed the entire horrifying process, including gassings he personally witnessed. Filip Muller, a prisoner who worked for three years in the crematoria but survived, described unbelievably brutal exterminations. And so did thousands of others.

But Carolyn Yeager did stroll through Auschwitz and Birkenau seven decades later, and she’s pretty sure the guides didn’t give her the real lowdown. One Auschwitz gas chamber was “really a morgue,” later turned into an air raid shelter. Over at Birkenau, there was a “beautiful, modern hygiene building” where arriving prisoners had their hair shorn, but that also occasionally doubled “as a ballroom.” SS guards there regularly socialized with prisoners, with a number of love affairs resulting in postwar marriages. Guards and inmates “enjoyed friendly competition on Saturday afternoons and Sundays, with enthusiastic cheering sections.”

Actually, Yeager, a relatively new face in denialist circles, seems to have had something of an attitude long before she brought her analytical abilities to Auschwitz. On her website, she describes growing up in a “white home town” in the Midwest, the daughter of a German-American father who complained about “the dishonest Jews who cheated him and the Negroes who stole from him.”

She says she was a liberal for a time, “sympathetic to the plight of the coloreds,” but in the late 1990s began to read conspiracist literature and “learned the truth” about the takeover of the American monetary system “by mainly Jewish and foreign bankers.” She “let go” her fear of being called an anti-Semite. “Finally,” she writes, “I was drawn to National Socialism as a viable alternative, learning about its true nature as opposed to the lies I had been taught.”

So the mind of one Carolyn Yeager has been liberated. It’s a shame the same can’t be said of the millions murdered by people who think like she does.