APR. 14
A federal jury convicted Michael Jacques of the racially motivated arson of a predominantly black church in Springfield, Mass., the night of Barack Obama’s 2008 election. Two of Jacques’ friends earlier pleaded guilty to roles in the same fire. In a similar but unrelated case, Jeffrey Smith of nearby Medford, Mass., pleaded guilty on April 8 to sending letters to seven churches and four NAACP offices expressing racial hatred and threatening to burn them down.

APR. 20
Chicago federal judge overturned the conviction of neo-Nazi Bill White for using his website to make illegal threats of violence. White, who once led the neo-Nazi group American National Socialist Workers Party, published information about the jury foreman in the trial that convicted another neo-Nazi, World Church of the Creator leader Matthew Hale. But the judge found that prosecutors had not proved that White, who was released after the ruling, intended to solicit violence.

MAY 5
A federal jury in Boise, Idaho, found self-described “attorney for the damned” Edgar Steele guilty on charges of trying to hire a hitman to kill his wife and mother-in-law. Steele was little known until 2000, when he unsuccessfully defended members of the neo-Nazi Aryan Nations in a lawsuit brought by the Southern Poverty Law Center. Soon after, he became an active anti-Semite. The Aryan Nations was largely destroyed as a result of the suit and the 2004 death of founder Richard Butler.

MAY 25
A man was arrested after accidentally shooting a pistol in his Madison, Wis., motel room and then telling police that he was there to kill a doctor at a local Planned Parenthood clinic. Found with Ralph Lang was anti-abortion literature, a U.S. map marked with apparent targets and the handwritten words, “Blessed Virgin Mary says Hell awaits any woman having an abortion.” Lang faces state and federal charges.

MAY 26
A federal judge sentenced Ronald Wayne Edwards, former imperial wizard of the Kentucky-based Imperial Klans of America, to four years in prison for drug and gun violations. Both Edwards and his long-time girlfriend, Christina Gillette, had pleaded guilty earlier to charges connected to trafficking methamphetamines and painkillers. Gillette was sentenced to serve a year and a day.

MAY 28-29, 2011 • AALBORG, DENMARK
A private seminar on religion and politics entitled “Revolt Against Civilization” brought together some of the leading lights of U.S. and European white nationalism and anti-Semitism. Hosted by Christian Lindtner (far right) of the Danish Society for Historical Research, the seminar was broadcast in America by Connecticut-based Voice of Reason (VOR) Radio, which specializes in racist materials. Those attending included (from left) Tomislav Sunic, a Croatian author and frequent guest speaker at American extremist events; Alexander Jacob, whose academic work focuses on a return to “European ideals” to combat Jewish intellectualism; David Duke, the U.S. neo-Nazi and former Klan leader who won a majority of the white vote in his 1991 bid to become Louisiana’s governor; Helmuth Nyborg, a Danish psychology professor; and Kevin MacDonald, a psychology professor at California State University, Long Beach, who wrote a trilogy of books that attack Jews and are revered by neo-Nazis. VOR identified all participants as “doctors,” and they may all be. But Duke “earned” his doctorate at an anti-Semitic Ukrainian institution that’s been described as a “diploma mill” by the State Department. Despite his own heated attacks on Martin Luther King Jr. as a plagiarist, Duke is known for having cribbed large portions of a book from MacDonald’s trilogy, including 232 footnotes that exactly or nearly match MacDonald’s.

JUNE 1
Two former police officers were acquitted of most charges connected to allegedly trying to cover up the murder of a Mexican immigrant in Shenandoah, Penn. But former Shenandoah Police Chief Matthew Nestor was sentenced to 13 months for falsifying police reports and former Lt. William Moyer received three months for lying to the FBI. The charges stemmed from an investigation into the July 2008 slaying of Luis Ramirez by a group of local high school football players.

JUNE 7
A federal grand jury indicted 51 alleged members of the Latino Azusa 13 gang for conspiring to terrorize black residents into leaving Azusa, Calif., something the indictment said the gang adopted as principle nearly 20 years ago. The case is the latest evidence in recent years of Latino gangsters in California targeting black people for racial reasons in certain areas. 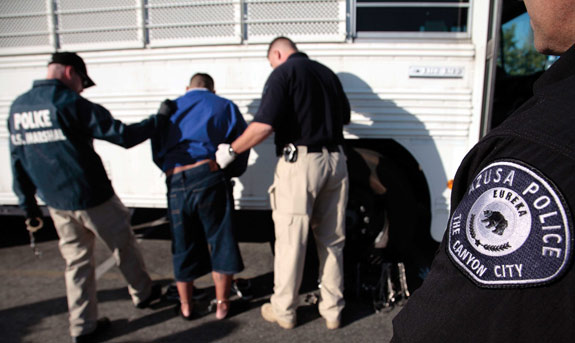 Fifty-one members of the Latino Azuza 13 gang were charged in a campaign of intimidation, threats and violence aimed at black people in Azuza, Calif. CREDITS: JASON REDMOND/AP IMAGES

JUNE 7
Long-time white supremacist activist August Byron Kreis III, indicted earlier in Columbia, S.C., on felony charges of filing fraudulent statements to obtain veterans benefits, surrendered to federal authorities in Obion County, Tenn. Kreis, who a week earlier had threatened to shoot agents who came to arrest him, leads a tiny splinter of what was once a powerful group, the neo-Nazi Aryan Nations.

JUNE 9
Yusef Bey IV, the black supremacist leader of Your Black Muslim Bakery, a business at the center of a militant Black Muslim network in the Oakland, Calif., area, was convicted of three counts of first-degree murder for ordering the 2007 slayings of journalist Chauncey Bailey and two other men. Bey, who was trying to prevent Bailey from reporting on the bakery’s financial troubles for The Oakland Post, was to be sentenced on July 8 along with the bakery associate convicted of actually carrying out the murders.

CAPTION/CREDIT: Fifty-one members of the Latino Azuza 13 gang were charged in a campaign of intimidation, threats and violence aimed at black people in Azuza, Calif. JASON REDMOND/AP IMAGES