A woman who fled the country with her biological daughter rather than surrender custody of the child to her lesbian former partner in Vermont was assisted by a prominent Christian direct-mail guru, according to an FBI affidavit.

A woman who fled the country with her biological daughter rather than surrender custody of the child to her lesbian former partner in Vermont was assisted by a prominent Christian direct-mail guru, according to an FBI affidavit.

Lisa Miller and her daughter — missing since 2009 — have been living at a beach house in Nicaragua owned by Philip Zodhiates, who runs the marketing company Response Unlimited in Waynesboro, Va., according to the affidavit.

Zodhiates told The Advocate magazine that the pair were not living at his house in Nicaragua and called the accusations “absurd.”

Miller’s custody battle with her former partner, Janet Jenkins, has received widespread publicity because of the questions it raised about the rights of non-biological parents in same-sex unions. Miller, who renounced homosexuality and became an evangelical Baptist, lost custody of her daughter after failing to grant Jenkins her court-required visits, citing her objections to Jenkins’ “homosexual lifestyle.” The two had been joined in a civil union in Vermont in 2000. Miller was artificially inseminated and gave birth to her daughter, Isabella, in 2002. 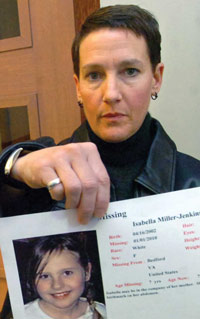 Lisa Miller fled the country with her daughter rather than surrender custody to her lesbian former partner, Janet Jenkins (above).

Zodhiates’ alleged involvement in the case was first reported by The New York Times on April 23.

In 2006, the Southern Poverty Law Center revealed that Zodhiates’ company was charging $100 for the rental of every 1,000 names of subscribers to The Spotlight newspaper. Founded by infamous anti-Semite Willis Carto, The Spotlight carried anti-Semitic and wildly conspiracist articles interspersed with ads for Klan, neo-Nazi and related hate groups, not to mention bizarre health remedies. According to Response Unlimited’s website at the time, purchasers of the subscriber list included the Republican Governors Association, the anti-union National Right to Work Foundation, the nativist U.S. English group, and the archconservative Washington Times.

Zodhiates also peddled lists of subscribers to the American Free Press, which replaced The Spotlight when that tabloid was shut down amid legal and financial troubles. The Free Press began immediately after The Spotlight fizzled in 2001 and picked up many of its predecessor paper’s propagandists. Like The Spotlight, it has carried stories on secret “New World Order” conspiracies, American Jews and Israel. Mixed in have been advertisements for outfits like the late Pete Peters’ Scriptures for America and Kingdom Identity Ministries — practitioners of Christian Identity, a theology that claims that Jews are the literal descendants of Satan.

The Miller case also resulted in the arrest of a Tennessee pastor who is accused of aiding in the “international parental kidnapping” of Miller’s daughter, The New York Times reported. Pastor Timothy David Miller of Crossville, Tenn., allegedly helped Miller flee the country after a Vermont court in 2009 granted Jenkins primary custody of the girl, now 9.

According to the affidavit, the FBI, using court-approved searches, found E-mails from Pastor Miller that appear to arrange Lisa Miller’s flight to Nicaragua. The E-mails also suggested that Zodhiates arranged to send them supplies, the document said.