Fox News host Glenn Beck fretted endlessly about the end times. But it was really Beck's hourglass that was running out

In his five years on cable news, far-right superstar Glenn Beck spent countless hours charting signs that the end was near. From the "New World Order" to Islamist conspirators, and from economic disintegration to the wars of Gog and Magog as imagined in popular apocalyptic fiction, no end-times theory seemed to strike the chalk-wielding doomsayer as too outrageous.

"The increased tension between Iran and the west, is it just one more piece in the puzzle, one more chess move towards the final apocalyptic vision of Iran's maniacal leaders? Are we, indeed, living in the end times?" he wondered in March 2007, while still at CNN Headline News.

"Is the apocalypse almost upon us? Are the cataclysmic events of 9/11, Katrina, tsunami, famine and the threat of global pandemic signs we're living in the end times? One world government, one world economy, one world vision. Are we creeping even closer to the Book of Revelations' countdown to doomsday? And does an age-old prophecy foretell a Russian-Iranian alliance against Israel as well as a nuclear showdown? Apocalypse now?" 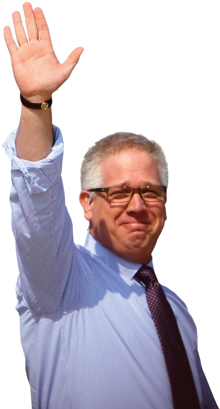 Outfoxed: Fox News host Glenn Beck made millions frightening Americans about a supposedly imminent apocalypse. But in the end, Beck cost Fox too much credibility, and he was ejected from the cable channel’s den.

Cautioning his audience to prepare for imminent collapse, he declared himself a "watchman" for harbingers of the end. As Beck saw it, they were everywhere: monetary policy, Sino-American relations, weather events and French politicians could all augur that the end was nigh.

Apparently, France didn't get its wish, because the amateur eschatologist — who insists that agents of the New World Order will nab him as soon as they seize power — was still around in February 2009, this time as a Fox News host, to defend his end-times rants. "If you say stuff like this, it sounds like a conspiracy theory," he said. "And I'm not saying cats and dogs are going to be sleeping with each other, etc., etc. — what I'm saying is there's going to be a change coming. … By the way, America, I hope I'm nuts."

Beck must have given up that hope, because last Nov. 13 he was back in one of the four horsemen's saddles. "[B]race yourself," he thundered. "We went to two or three experts yesterday, [and] one of them said that by next year a quarter of this nation will not be able to afford food." Another, he claimed, told him that, within months, a Hershey's bar would cost $15.50.

"Every night, I come to you and I say there is a storm coming — every night," Beck said two weeks later. "But I tell you, I'm very, very close to just saying — time to close the door on the cellar, guys. If you're not seeing it yet, you never will — because it's time just to start talking to the people who will pay attention, who will pull their head out and start paying attention."

Even if you were paying attention, a Hershey's bar can still be purchased for less than a dollar. There has been no apocalypse, no New World Order, no global currency, no mass starvation. But Glenn Beck just kept right on going.

Evaluating the natural disaster that devastated Japan this March 14, he said: "I'm not saying God, you know, is causing earthquakes. … I'm not not saying that either. God — what God does is God's business. But I'll tell you this: Whether you call it Gaia or whether you call it Jesus, there's a message being sent and that is, hey, you know that stuff we're doing? Not working out real well. Maybe we should stop doing some of it."

Three weeks later, after enduring years of embarrassing criticism of its "news" host and a highly effective boycott of Beck's advertisers, Fox announced that Beck would be "transitioning" off the screen by the end of the year. At the finale, it seems, Fox decided that it should stop doing some of what it does regularly. It turns out it wasn't the world that was ending — just Glenn Beck's job in it.