Three men arrested in 2010 may have been the latest right-wing fanatics inspired by conservative Fox News commentator Glenn Beck.

Three men arrested in 2010 may have been the latest right-wing fanatics inspired to murder or threats of violence by conservative Fox News commentator Glenn Beck's charismatic and sometimes end-times-focused diatribes, according to family members and attorneys.

Kenneth Kimbley, the self-proclaimed leader of the Brotherhood of America Patriots, apparently interpreted Beck's rants as a call to action. At the time of his arrest in July after discussing attacks on local bridges with a federal undercover agent, the 58-year-old had 20,000 rounds of ammunition, a stock of firearms and materials to construct grenades, according to court documents. He also conveyed threats against President Obama to the agent, describing extensive booby traps he had built and proclaiming his militia would "resist in the event the government started rounding up patriots." That is a mainstay claim among militias driven by conspiratorial ideologies that accuse federal agencies of preparing concentration camps to one day round up well-meaning patriots. 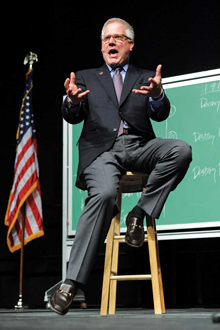 The “schoolteacher”: There is evidence suggesting several violent extremists took their cues from Glenn Beck, but the Fox News host has denied that his extreme rhetoric and conspiracy-mongering played any part in influencing those who saw him as a mentor.

Kimbley pleaded guilty in November to unlawful possession of a firearm and attempt to make a firearm in violation of federal law. In his defense, his public defender attested, "Everything said by Mr. Kimbley is no different than what his idol, TV commentator Glenn Beck, typically states on the air and is protected free speech."

Kimbley remains in federal custody and faces up to 10 years in prison when he is sentenced this winter. Arrested with Kimbley was Steven Eugene Winegar, 52, who is under house arrest in Harpster, Idaho, until his trial is scheduled.

In April, Charles Alan Wilson was arrested by the FBI for repeatedly threatening to kill U.S. Sen. Patty Murray (D-Wash.) in retribution for her vote for health care reform, so-called "Obamacare." Wilson was sentenced in October to a year and one day in prison. In a letter submitted to attest to his good character during sentencing, one of Wilson's cousins said that "his fears were grown and fostered by Beck's persuasive personality" and that Wilson was "under the spell that Glenn Beck cast, aided by the turbulent times in our economy."

A third man, Byron Williams, faces counts of attempted murder and a host of weapons charges after a shootout with police officers on his way to San Francisco last summer, where he allegedly planned shootings at the ACLU and the Tides Foundation — two frequent targets of Beck's rants (the Tides Foundation was almost unknown to the public until Beck began attacking it regularly).

Williams later described Beck as "like a schoolteacher on TV."

Nearly two years ago, extremist Richard Poplawski fatally shot three Pittsburgh police officers when they responded to a domestic dispute at his home. The killings drew attention to the allure of Beck's rhetoric when a man described as Poplawski's best friend said the killer was "obsessed" with some of Beck's theories.

Beck has denied any form of responsibility for the extreme actions of his viewers.