With the 2012 presidential campaign season getting under way, a rising tide of experts, politicians and pundits are warning of “creeping Shariah” — the notion that any day now, the U.S. Constitution will be swept away by Islamic religious law. Never mind that it isn’t true and isn’t possible. It plays well in certain quarters.

With the 2012 presidential campaign season getting under way, a rising tide of experts, politicians and pundits are warning of “creeping Shariah” — the notion that any day now, the U.S. Constitution will be swept away by Islamic religious law. Never mind that it isn’t true and isn’t possible. It plays well in certain quarters.

In May, for instance, Frank Gaffney’s anti-Muslim think tank, the Center for Security Policy, released a study listing 50 legal cases it claimed proved how Shariah was undermining U.S. constitutional law and public policy.

A month later, Daniel Pipes’ equally anti-Muslim Middle East Forum published a survey co-authored by polemicist David Yerushalmi that dubiously claimed that 81% of American mosques surveyed advocate violent jihad and the overthrow of the U.S. government. This provocative conclusion was largely based on the fact that ancient Islamic texts containing passages endorsing violence were found in their libraries. (The Bible, of course, also has passages endorsing violence.) 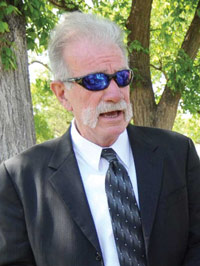 Even further to the political right, Joseph Farah’s online WorldNetDaily published a three-part series on the alleged Shariah threat by actor and martial arts enthusiast Chuck Norris (well, he penned at least some of it; the Wonkette website claims that portions of it were plagiarized from other sources). The April series recycled unsubstantiated claims of a “vast network” of foreign extremists operating inside the U.S. and suggested that President Obama practices “advocacy for Shariah law.”

Vituperative Muslim-basher Walid Shoebat, a Muslim convert to Christianity who claims to be a former Palestine Liberation Organization terrorist, spoke in May to a conference of South Dakota law enforcement representatives as an “anti-Muslim terrorist expert.” Shoebat has declared that “Islam is not the religion of God — Islam is the devil” and, in 2008, said, “Every single … Islamic terror organization in the world supports Barack Hussein Obama. … No one is called Hussein unless he is Muslim.”

Terry Jones — the obsessively anti-Muslim Florida pastor whose March burning of a Koran touched off violent demonstrations in Afghanistan that resulted in more than 20 deaths — traveled to Dearborn, Mich., in April for yet another bid for political attention. Local officials, fearing violent counter-demonstrations in a city with the nation’s highest concentration of Muslims, hauled Jones and colleague Wayne Sapp before a judge to ask that they be required to post a “peace bond.”

The pair, saying they were standing up for free speech, refused to post the symbolic $1 bond set by the judge and were briefly jailed. Jones returned to Dearborn a week later to protest in front of City Hall — a move that drew scores of angry counter-protesters.

Not all the attacks on Muslims were rhetorical. In Stockton, Calif., investigators determined that an April fire at a local mosque had been deliberately set. Another fire the same month at a mosque in Houston also was ruled a case of arson and was being investigated as a hate crime.