A mysterious company called Silver Bullet Gun Oil has begun selling a line of products for automatic weapons that allegedly contains 13% liquefied pig fat for the express purpose of denying Muslims killed by the weapons “a place in paradise.” The oil is being pitched to soldiers and Marines deployed to Iraq and Afghanistan.

A mysterious company called Silver Bullet Gun Oil has begun selling a line of products for automatic weapons that allegedly contains 13% liquefied pig fat for the express purpose of denying Muslims killed by the weapons “a place in paradise.” The oil is being pitched to soldiers and Marines deployed to Iraq and Afghanistan.

“No longer is paradise guaranteed to the so-called ‘Martyrs’ who die for Allah,” one YouTube video advertisement brays, going on to tell Muslims: “You are fools, on a fool’s mission. Lied to and led by False Prophets and Cowards. … You cannot win, and Will be consigned to Allah’s Hell for eternity if you die from a weapon using Silver Bullet Gun Oil!”

Consumption of pork is forbidden in Islam, so the theory behind the oil is that a Muslim killed by a bullet that has traveled down the barrel of a gun greased with pig fat would be barred from entering heaven. Even if the gun oil is never used, the manufacturer boasts, its mere existence will terrorize Muslims and result in an effective “counter-Islamic terrorist force multiplier.” 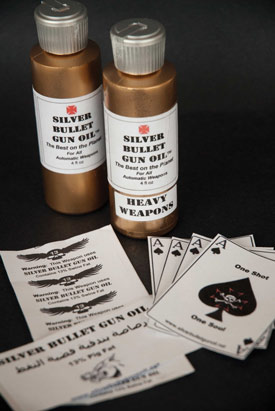 The identity of the oil’s manufacturer is unknown, but the individual goes by the nom de guerre “Midnite Rider — Servant of Yahweh,” an Old Testament name for God. It’s also unknown where the company is based, although an order of the oil sent to the Intelligence Report was mailed from Courtland, Va.

In an E-mail to the Report, Midnite Rider affirmed his intent to offend Muslims. “It is designed as an affront to an entire belief structure,” he wrote. “You have seen what the people this oil is designed for did to folks who draw simple cartoons or burn certain pieces of paper, right?”

Midnite Rider claimed that police tactical teams and “many members” of all U.S. military branches use the oil. It could not be determined if there is any truth to this claim.

The theological rationale for the claimed effect of Silver Bullet Gun Oil is weak at best. Nothing in Islam suggests that inadvertently coming in contact with a pork product at the moment of death would deny the victim entry into heaven. Also, while the Koran forbids the voluntary consumption of pork, Muslim religious leaders have long taught that Allah forgives doing so if it is unavoidable to, for example, avoid starvation. The assertion that Muslim fighters would be “terrorized” by a type of gun oil seems sophomoric at best.

Boyd Collins, a civilian spokesman for the U.S. Army Materiel Command, which oversees the Army’s equipment, said he had never heard of the gun oil, though he conceded that a soldier or Marine could theoretically purchase the oil on his or her own and use it on the battlefield.