A man who once operated a white supremacist bookstore was arrested along with his girlfriend this summer on charges of murdering five American expatriates in Panama.

A North Carolina neo-Nazi who once operated a white supremacist bookstore was arrested along with his girlfriend this summer on charges of murdering five American expatriates in Panama.

William Dathan Holbert and Laura Michelle Reese were apprehended on July 26 by the Nicaraguan army as they attempted to enter the country illegally by crossing the San Juan River. A week earlier, police in Panama had discovered the body of a woman missing since March buried under the back patio of a property owned by Holbert in western Bocas del Toro province. A second body, that of a man, was found nearby. 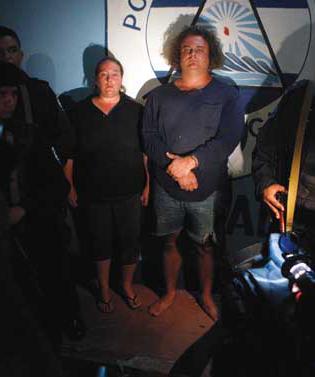 The week after Holbert and Reese were arrested and returned to Panama, authorities found the additional bodies of a man, his wife and their teenage son on the same property. Holbert allegedly confessed to murdering all five people found there. Since then, a Panamanian news outlet has reported that Holbert also admitted murdering an American lawyer in Costa Rica, where he also spent time.

Holbert is from Hendersonville, N.C., where he once owned a landscaping business. He later managed a gym in Asheville, N.C. Holbert — who sports a swastika tattoo on his upper back and has “Aryan Pride” inked on one arm — joined the neo-Nazi National Alliance in 2002.

In 2005, Holbert opened a business called Southern National Patriots in Forest City, N.C., which sold books, CDs and pamphlets promoting white supremacy. He held meetings at the shop, where he and others shared their views on the demise of Southern white culture and advocated for the rights of white Southerners.

Later, Holbert filed for bankruptcy and moved to the North Carolina coast. He allegedly sold a house on Oak Island that he didn’t own before he and Reese left the state. After being pulled over for speeding in a stolen car in Wyoming in 2006, the couple apparently fled the United States.

Panamanian authorities said that Holbert befriended residents in the tourist area of Bocas del Toro and killed them in order to steal their money and properties. He and Reese — who faces lesser charges — reportedly were captured with contracts, deeds and stocks from Panamanian companies.