The radicalization of Anders Behring Breivik, the terrorist who slaughtered 77 people in Norway, didn’t occur in a vacuum. Like Timothy McVeigh, who was inspired by the writings of a neo-Nazi leader to bomb the Oklahoma City federal building, Breivik was heavily influenced by a cacophony of extremist voices decrying the supposed takeover of the Western world by Islamic fundamentalists.

Breivik saw himself as a Christian warrior in the midst of what he called an “existential conflict” with Islam – a modern knight confronting foreign hordes at the gates of the West. His 1,500-page manifesto, titled “2083: A European Declaration of Independence” and released just hours before the July 22 massacre, is a call to arms against “cultural Marxism” — a term describing the white nationalist notion that multiculturalists are working to destroy Western civilization.

“We are sick and tired of feeling like strangers in our own lands, of being mugged, raped, stabbed, harassed and even killed by violent gangs of Muslim thugs, yet being accused of ‘racism and xenophobia,’” Breivik wrote. 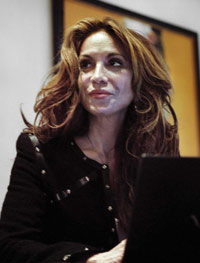 Breivik cited U.S.-based anti-Muslim extremists dozens of times in his manifesto, including the co-founders of Stop Islamization of America, Pamela Geller and Robert Spencer.Jason Andrew/Getty Images

Most of his inspiration seems to have been derived from a small but influential group of American “experts” who have waged a populist campaign of vilification – not only against the threat of Islamic terrorism but also against Muslims in general. Their frequently inflammatory rhetoric invokes fear among many on the political right that Islamic fundamentalists are on the verge of trampling the U.S. Constitution and imposing a caliphate guided by Shariah law.

In his manifesto, Breivik quotes figures such as Pamela Geller, a Manhattan socialite who rose to prominence for her vitriolic opposition to the Park51 mosque near the site of the 9/11 attacks in Manhattan, and Andrew Bostom, an American doctor who has written extensively about the intersection of jihad and anti-Semitism.

But among those inspiring Breivik, none seem to have been as influential as Robert Spencer, co-founder with Geller of Stop Islamization of America (SIOA) and the administrator of Jihad Watch, an Internet portal that attacks Muslims under the banner of news and analysis. Breivik references Spencer dozens of times and suggests that he should win the Nobel Peace Prize. “About Islam I recommend essentially everything written by Robert Spencer,” Breivik wrote. 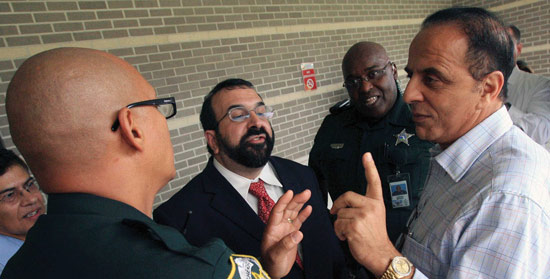 Spencer, who was profiled in the Spring 2011 issue of the Intelligence Report, is an entirely self-taught “expert” in the study of modern Islam and the Koran, who often takes the Koran literally as an innately extremist and violent text. “As I have pointed out many times,” Spencer wrote in 2006, “traditional Islam itself is not moderate or peaceful. It is the only major world religion with a developed doctrine and tradition of warfare against unbelievers.”

Breivik’s fear of multiculturalism reflects a broader trend. On both sides of the Atlantic, nationalist fevers are rising amid changing demographics brought on, mainly, by immigration. In Europe, the targets of radical-right extremists are typically Muslims because they make up a large share of European immigrants. In the U.S., until recently, nativist rage has been directed mostly at Latinos and Latino immigrants. 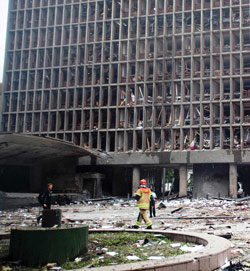 What ties, if any, that Breivik may have had with extremist groups in Europe remained unclear in the immediate aftermath of the attacks. The Daily Telegraph of Great Britain reported that Breivik sent his manifesto to more than 1,000 contacts an hour before he began his rampage with the bombing of a government building in Oslo. Those receiving the manifesto included the anti-Muslim English Defence League and Combat 18, a neo-Nazi skinhead group.

In the U.S., anti-Muslim activists angrily denied any connection between their incessant demonization of Muslims and Breivik’s acts of terror.

“If I was indeed an inspiration for his work,” Spencer wrote on Jihad Watch, “I feel the way the Beatles must have felt when they learned that Charles Manson had committed murder after being inspired by messages he thought he heard in their song lyrics.”

As much as Spencer would like to think that, there were no messages in “Helter Skelter” that could possibly be construed as portraying actress Sharon Tate and four others murdered by Manson’s followers as an existential threat. The same cannot be said of Jihad Watch.

Breivik predicted the onset of a war that would kill or injure more than a million people as he and his small group of warriors seize “political and military control of Western European countries and implement a cultural conservative political agenda.” 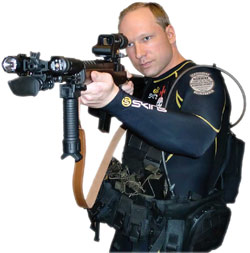 In preparation for this conflict, the manuscript lays out plans for the formation of a Christian army, known as the Knights Templar, to wage “guerrilla warfare against the Multiculturalist Alliance through a constant campaign of shock attacks.” (The Knights were an army of Christian soldiers that fought the Crusades during the Middle Ages.)

“The objective is to continue to demoralize them,” Breivik wrote. “It is a simple strategy of repeated pin-pricks and bleedings that will sap the will of the [multiculturalists] to continue.”

As shocking as that is, already some white nationalists and prominent conservatives, including columnist and MSNBC contributor Pat Buchanan, have defended Breivik’s ideas in spite of the bloody aftermath that has left Norway reeling. To them, terrorists like Breivik are not the threat – Muslims are.

“[A]wful as this atrocity was, native-born and homegrown terrorism is not the macro-threat to the continent,” Buchanan wrote for World Net Daily, a far-right online “news” service. “That threat comes from a burgeoning Muslim presence in a Europe that has never known mass immigration, its failure to assimilate, its growing alienation, and its sometimes sympathy for Islamic militants and terrorists.”

Breivik's boat at the island of Utoya AP Photo/Matt Dunham

Such support for the ideology of a terrorist, from such an influential U.S. commentator, may only embolden others who share Breivik’s view of an existential threat to his culture. We need only look at Norway or Oklahoma City to see the likely results.