Attacks directed at Muslims seem to have been partly instigated by the controversy surrounding Ground Zero community center.

It was national news when a New York City cabbie was slashed in August by a knife-wielding fare, allegedly for the sole reason that he is a Muslim. But that incident was merely the most notorious in a recent barrage of attacks directed at Muslims and their institutions in the United States that seems to have been partly instigated by the heated controversy surrounding a proposed Islamic community center near Ground Zero in New York City.

The U.S. Justice Department is investigating at least five recent anti-Muslim incidents in four states, including that of the Manhattan cab driver, Ahmed Sharif. The Bangladeshi native picked up college student Michael Enright on Manhattan’s East side, who asked him if he was a Muslim, Sharif told authorities. When Sharif answered in the affirmative, a drunken Enright allegedly pulled out a folding tool with a knife and attacked him. Enright — who, bizarrely, had spent about six weeks in Afghanistan on a project for a group that promotes interfaith dialogue — was charged with several felonies. Sharif suffered a serious neck wound and cuts to his arm, face and one hand. 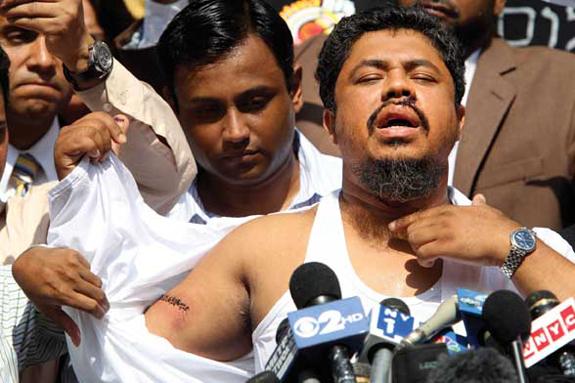 New York City cab driver Ahmed Sharif shows some of the wounds allegedly inflicted on him by college student Michael Enright. The August attack was part of a wave of anti-Muslim hate crimes. 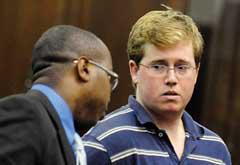 The pace of apparent anti-Muslim hate crimes seemed to pick up this year after various politicians and groups attacked the proposed New York center, often using vitriolic language that seemed to demonize all Muslims. Former House Speaker Newt Gingrich, for instance, compared Muslims to Nazis, while a group raising money for Republicans ran television ads saying the “monstrous” planned building was intended to “celebrate [the] murder of 3,000 Americans.”

In fact, the imam behind the planned center has repeatedly criticized Muslim extremism and won major awards for his interfaith work. He gave trainings and speeches for the Bush Administration’s State Department and the FBI.

Among the other recent anti-Muslim incidents, in chronological order:

• A pipe bomb detonated in May at a mosque in Jacksonville, Fla., while about 60 people were inside. A small fire erupted in the rear of the building, but nobody was hurt. A month earlier, a man had entered the same mosque, shouting anti-Muslim epithets.

• A fire in July destroyed playground equipment at an Islamic center in Arlington, Texas. Vandals have also cut copper tubing and spray-painted pornographic graffiti at the mosque.

• A brick was thrown at the Madera Islamic Center in California in August, where signs left behind read, “Wake up America, the enemy is here,” and “No temple for the god of terrorism.”

• The same month, in Murfreesboro, Tenn., an arsonist damaged construction equipment at the site of a planned mosque that had drawn protests.

• Also in August, five teenagers were arrested for shouting obscenities during Ramadan services outside a mosque in Carlton, N.Y. One of the worshippers was clipped by a sports utility vehicle during a confrontation with the teens and injured slightly. One of the teens also was charged with firing a shotgun outside the mosque three days earlier.

• An arsonist in September torched the trunk of a car parked outside an Islamic community center in Lafayette, La., that belonged to a member of the center.

• Also in September, a man in Fairview Heights, Ill., who had threatened the Muslim community and President Obama engaged in a seven-hour standoff with authorities who came to his home to discuss the threats. Roman Conaway Jr., who had earlier said on Facebook that he planned to burn a Koran, was wearing what he said was a suicide bomb belt and also had two 55-gallon drums he said were filled with explosives. No explosives were found after he surrendered.

The apparent uptick in anti-Muslim violence followed a general decline in such incidents in the years since the Sept. 11, 2001, World Trade Center attacks. Although the United States experienced a 1,700% increase in anti-Muslim hate crimes immediately after 9/11, then-President Bush spoke out repeatedly against seeing Muslims or Arabs as enemies of America. The speeches seemed to have a real effect, with anti-Muslim hate crimes dropping by two thirds in 2002.

This summer, President Obama spoke out in a similar vein. But many other politicians and anti-Muslim groups have not followed suit.