Legal woes continue to mount for neo-Nazi leader Bill White and white supremacist blogger Hal Turner, two men who tested the limits of constitutional free-speech protections with barrages of threats directed at their many enemies. Both men had won some early rounds in their court cases, but now both are in jail facing significant prison terms.

In the case of White, a federal civil jury in Roanoke, Va., on Aug. 27 awarded five black women $545,000 in damages from White, who had harassed and threatened them in 2007 because they had filed a discrimination suit against their white landlord in Virginia Beach. At the time, White was also a local landlord, specializing in renting low-grade properties to mostly black tenants in Roanoke. 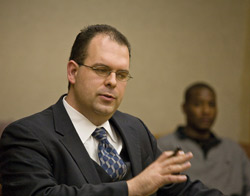 The case stemmed from letters White sent each of the women after they sued their landlord, calling them “dirty parasites,” among other things. The women testified that they suffered from the stress and fear the letter caused them, and said they remained afraid of White and his neo-Nazi followers. The Southern Poverty Law Center financially supported the suit and offered legal advice to assist the women in their case.

It was also in a Roanoke federal courtroom that White was sentenced last April in an unrelated criminal case to 2 years in prison following his conviction for threatening three of his perceived enemies. He is now serving that sentence.

It could get worse yet for White. An appeals court in June reversed a Chicago judge’s dismissal of the indictment against him in yet another criminal case, in which he allegedly encouraged violence against a former jury foreman. White will now likely have to go to trial in that case, in which he posted the name, address, telephone numbers and other personal information of the jury foreman in the 2005 trial of another neo-Nazi leader, Matt Hale. White blamed the man for Hale’s conviction and 40-year sentence for soliciting the murder of a federal judge. 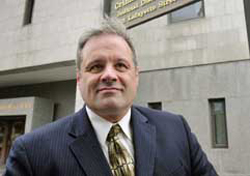 In the case of white supremacist blogger and Internet radio host Hal Turner, a federal jury in Brooklyn, N.Y., in early August found Turner guilty of threatening over the Internet to assault and murder three U.S. appellate court judges. Turner was infuriated with the judges’ ruling upholding a ban on handguns in Chicago and Oak Park, Ill. “Let me be the first to say this plainly: These judges must die,” Turner wrote. “Their blood will replenish the tree of liberty.” The next day, Turner updated the post to include the names, work addresses, phone numbers and photographs of the three judges, along with a map of their courthouse.

Two previous juries had deadlocked over the charges, but it took the jury in the third trial only two hours to reach a verdict. At press time, Turner had not yet been sentenced, but faced up to 10 years in prison and a $250,000 fine.

Turner, of North Bergen, N.J., argued that his June 2009 Internet threats against the judges were nothing more than political hyperbole. He also argued that during a 2003-2007 stint as a paid FBI informant, his handlers encouraged him to engage in just such vitriol. Turner’s direct FBI supervisor denied that he’d been told to make such threats, adding that Turner was hard to control but was nevertheless a valuable asset because of his standing in the white supremacist world.