Police announced that they arrested Barrett’s neighbor late Thursday afternoon and charged him with murder in connection with Barrett’s slaying. 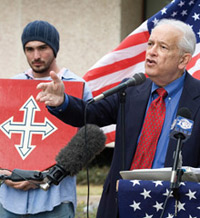 Update: Police announced that they arrested Barrett’s neighbor late Thursday afternoon and charged him with murder in connection with Barrett’s slaying. Rankin County Sheriff Ronnie Pennington told The (Jackson, Miss.) Clarion-Ledge that Vincent McGee, 22, had done yard work for Barrett. Barrett was stabbed to death and his body set on fire. Though McGee is black, police have not revealed whether Barrett’s racism played a role in the killing.

Richard Barrett, a longtime white supremacist leader who generated more publicity than influence, was found dead this morning in his Pearl, Miss., home, apparently the victim of a homicide.

Firefighters discovered his body in a bathroom after neighbors reported a fire at Barrett’s home around 8 a.m., according to news reports. Few details have been released about the incident, which is under investigation by local, state and federal authorities.

Though Barrett, a lawyer, never became a major leader in white supremacist circles, he drew substantial press attention by organizing rallies and filing free speech lawsuits. “He was known not only for being one of the hardest of the hard-core haters but a gadfly as well, because of his limited legal knowledge,” said Brian Levin, director of the Center for the Study of Hate and Extremism at California State University, San Bernandino. “And he was notorious for claiming legal victories, some of which he never actually won.”

Barrett, 67, had a long history of denigrating minorities, particularly blacks, immigrants and gays. Born in New York City, the Vietnam War veteran launched his efforts on behalf of white Christians when he moved to Mississippi in 1966, according to the Anti-Defamation League (ADL). In his 1982 autobiography, The Commission, he called for resettling minorities groups to “Puerto Rico, Mexico, Israel, the Orient and Africa.” He also argued that “the Negro race … possess[es] no creativity of its own [and] pulls the vitality away from civilization.” And he favored sterilization and abortions of those deemed “unfit."

During a failed 1984 run for U.S. Congress in which he faced three black candidates, he said voters had to decide between “the cotton boll and three lumps of coal.” (Barrett also ran repeatedly, and unsuccessfully, for governor of Mississippi.)

In 1988, he headed a protest against integration in predominantly white Forsyth County, Ga. Sixty-five mostly out-of-town activists took part, including 40 robed Klansmen. Barrett was among the protestors who signed “The Forsyth County Covenant,” which argued for the advancement of “America’s heritage as a free, white, Christian, English-speaking democracy” and asserted that “all efforts to make us a bilingual, bisexual or biracial society must be defeated.” That same year, he worked with two racist leaders of the National States Rights Party to organize a pro-white demonstration at the Democratic National Convention in Atlanta.

He also led rallies in Atlanta against the Martin Luther King Day holiday; in California (twice) in support of the Los Angeles Police Department officers acquitted of assaulting Rodney King; in Boston after a St. Patrick’s Day parade was cancelled when a court forbade the exclusion of gay groups; and in Morristown, N.J., to commemorate “Independence from Affirmative Action Day.” Each time only a handful of followers showed up, but the events attracted large crowds of counter-demonstrators and received considerable media attention. In 2003, he successfully sued York, Pa., after the city initially refused to give the Nationalist Movement a permit to hold a rally.

Barrett reached out to young skinheads in December 1988 when he hosted a weekend of paramilitary training in Learned, Miss., according to the ADL. The few teenagers who attended tried to hit a picture of Martin Luther King Jr. during target practice, the Jackson Clarion-Ledger reported. In recent years, Barrett ran an online forum for skinheads, despite criticizing the violence of certain extremists groups.

Barrett also campaigned on behalf of several 1960s-era murderers. After Byron de la Beckwith was convicted in 1994 of killing civil rights leader Medgar Evers, Barrett circulated a petition and led a march seeking a pardon from the Mississippi governor. (Another purpose of the march was to support a high school principal who lost his job after saying he would cancel the senior prom rather than allow interracial couples to attend.) In 2004, Barrett tried to sponsor a booth at the Mississippi State Fair backing Edgar Ray Killen, the former Klan leader who was found guilty of manslaughter in connection with the deaths of three civil rights workers. And in fall 2008, he planned a Louisville rally in support of James Forde Seale, who was convicted of facilitating the Klan murder of two black teenagers.

Barrett marched on Martin Luther King Day in January 2008 in Jena, La., to deride King and the six black teenagers subjected to harsh prosecutions for an attack on a white student. The marchers chanted slogans such as, “If it ain’t white, it ain’t right.”