Each summer, a few lucky young folks, whose parents presumably have neo-Confederate sympathies, spend a week at a Sons of Confederate Veterans (SCV) Sam Davis Youth Camp. The camps are inspired by the words of a Confederate officer warning that a Southern loss in the Civil War meant its history would be “written by the enemy.”

Now in their seventh season, the Southern heritage group’s youth camps are supposed to help parents take “responsibility” for teaching “our Southern history and culture.” They feature a week-long reeducation of sorts, one that is needed, says the SCV, because today’s youth run a “terrible gauntlet” and “many are struck down along the way by one or more of the politically correct influences which flourish in our schools.” The youth camps are meant to harden these youngsters so they can withstand “the liberal, politically correct view of history.” 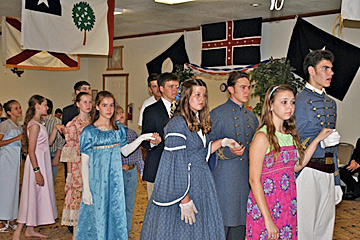 The camps are heavily indebted to Kirk Lyons, a white supremacist lawyer who led a decade-long effort to recruit hate group members to the SCV (Lyons was at one time a member of the neo-Nazi National Alliance). Lyons, who said in 2000 that his goal is “a majority European-derived society,” serves on the SCV committee that oversees the camps. He has lobbied to have SCV funds dedicated to camp scholarships and his own children have participated in the events.

Also serving on the camp’s oversight committee is Ron G. Wilson, a former SCV commander-in-chief (2002-2004) who once served on the board of Lyons’ legal firm. Working closely with Lyons during his tenure as commander, Wilson appointed racists and anti-Semites to key SCV posts, purged some 300 SCV members and leaders who opposed racism, and worked to turn the SCV into an actively neo-Confederate organization. The Sam Davis Youth Camps, which are programs held in various venues rather than specific physical locations, were inaugurated under Wilson’s leadership.

So what does the SCV teach today’s youth? Campers are exposed to various “truths” about what the SCV calls “the War for Southern Independence” and are given “thoughtful instruction” in a whole host of topics: “Southern history, the War Between the States, the theology of the South during the War, lessons on Southern heroes, examples of great men of the Faith, and for the first year, special programs and sessions for our Southern ladies!”

The first camp of the 2010 season was held in Clifton, Texas, during the third week of June. According to the Waco Tribune-Herald, the campers were taught that the Civil War was not about slavery. “Too many people have bought into that notion,” Texas SCV Commander Ray W. James told the newspaper, “and wrongly exalt then-President Abraham Lincoln as wanting to end slavery.” Lincoln was actually “a bigger racist than I ever knew,” James said of the author of the Emancipation Proclamation.

The campers also enjoy some interesting musical entertainment. This year, campers were serenaded by the Farnum Family, a singing group that puts on the annual “Songs for His People” gathering in Branson, Mo., which has often featured Christian Identity pastors. Christian Identity is a virulently racist and anti-Semitic religion that claims Jews are biologically descended from Satan and minorities are not human and do not have souls, having been created by God on the same day as “the beasts of the field.”

At the 2000 Songs for His People, for instance, Pastor Charles Jennings reportedly called himself “a strong racist” and said that he was pleased at “the quality of our race is in this room.” Identity Pastor Ted Weiland was similarly strident, telling the audience, “There is a Jewish agenda against Christianity.” Weiland claimed, “They [the Jews] are not the true Israel. They say we are the haters, but the Jews are the enemies of Christ.”

When asked about Weiland and Jennings’ comments, Norm Farnum told Hatewatch, “They were taken out of context.” When asked if he was a Christian Identity adherent, Farnum said, “not in the context that the Southern Poverty Law Center means.” He declined to elaborate.

The Farnums have some other unusual acquaintances. Their website links to Pastor John Weaver, whose 2001 defense of American slavery caused a firestorm after a newspaper reported that his tract was being sold at Piggie Park, a South Carolina barbecue institution. Weaver’s publication claimed, among other things, that “many ... African slaves blessed the Lord for allowing them to be enslaved and sent to America.” Weaver has also been identified as a member of the white supremacist Council of Conservative Citizens (CCC). Earlier this decade, Weaver served as chaplain-in-chief of the SCV.

Lyons is a big supporter of the Farnums, writing on Facebook that “this band MADE the western Sam Davis camp.” Lyons solicited $3,000 on Facebook to bring the Farnums to the Sam Davis Youth Camp that was held in early July in South Carolina. When asked by Hatewatch whether he had concerns about the Farnums, given their connections to Christian Identity pastors, Lyons said, “They are a wonderful family and they have been a blessing to the camp.” (Click here to see a video of Lyons speaking in early July at a confederate flag rally in Columbia, S.C., that also featured the CCC’s Kyle Rogers).