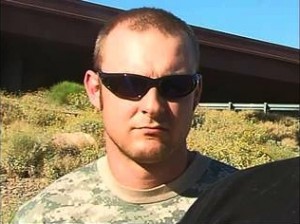 A federal grand jury Wednesday indicted Jeffery Harbin, 28, of Apache Junction, Ariz., on three counts of possessing explosive devices. Harbin, who has ties to the neo-Nazi National Socialist Movement (NSM) and was formerly a member of the neo-Nazi National Alliance, had in his possession 12 grenade-like improvised explosive devices. They were built with PVC pipe and filled with black powder, ball bearings, and an improvised fusing system.

The indictment alleges that Harbin unlawfully transported one of the devices. He was pulled over by law enforcement while driving his pickup truck on January 14 in Apache Junction. Dennis K. Burke, U.S. Attorney for the District of Arizona, told ABC15 News that “Jeffery Harbin built these IEDs in such a away as to maximize human carnage.” If found guilty, Harbin faces up to 10 years in prison for each count and the possibility of a $250,000 fine.

Neo-Nazi sympathizer and former NSM member J.T. Ready, currently one of Arizona's most visible self-appointed border patrollers, claimed that he personally recruited Harbin into the NSM, but that he himself is no longer a member of the group. When asked by ABC15 News in Phoenix if he knew what Harbin was planning to do with the bombs, Ready replied that things are still under investigation, and that the reporter “would have to talk to the feds and see what their official statement is…but I will say that domestic terrorism is real.” An NSM spokesman contacted ABC15 News reporter Christopher Sign and informed him that Jeffery Harbin was “no longer with” the NSM.

Jeffery isn’t the only Harbin to be involved in the neo-Nazi movement. He is the son of Jerry Harbin, who has been active in white nationalist causes for years. In 1999, the senior Harbin was listed as the Phoenix contact for a new chapter of the racist Council of Conservative Citizens in the Citizen Informer, the group's newspaper. The CofCC, which evolved directly from the pro-segregation White Citizens Councils of the Jim Crow South, has referred to African Americans as “a retrograde species of humanity.”

In 2001, Jerry Harbin became the coordinator for the Phoenix chapter of the National Alliance (NA), at that time one of the most dangerous and best-organized neo-Nazi groups in the country. Harbin's chapter was active through 2005, when it switched to a chapter of National Vanguard (NV). In 2006, Harbin showed up at the neo-Nazi Winterfest in Phoenix, which was hosted by the wife of Jesse Curnow, Arizona Coordinator for the white supremacist Nationalist Coalition. By 2007, Harbin was no longer with NV, and instead turned his attention to other, perhaps more benign activities, like being the adjutant and choir director of the Phoenix camp of the Sons of Confederate Veterans.

Repeated calls to Jerry Harbin for comment were not answered.