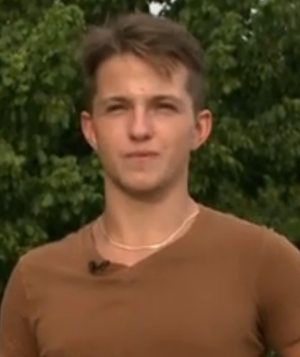 Editor’s note: Further information about Sharp’s activities in the white nationalist movement has come to light. Sharp is a member of the white supremacist website Stormfront, where his user profile lists him as a sustaining member who joined in December 2011. The website Liberty Lamp has the screenshots, though it appears Sharp has changed his nickname on both Stormfront and YouTube since Liberty Lamp posted the shots yesterday. As a result, his original username, “psharp94” no longer appears on Stormfront. He is now “sportline” (formerly “frozenpie77”) on Stormfront and “barron levi” (formerly “frozenpie77”) on YouTube.

Matthew Heimbach created quite a stir at Towson University in Baltimore when he created his “White Student Union” last year and proceeded to launch night patrols to keep students safe from black-on-white crime.

Now, such organizations are sprouting on more campuses.  This week, we got news that a White Student Union (WSU) had been formed at George State University in downtown Atlanta. Its mission is to “unite white students to advocate for their interests and the interests of white people, while celebrating heritage, culture, promoting a sense of ‘white identity,’ and working in unison with other campus organizations to tackle issues that affect us all.”

Until yesterday, the WSU’s website linked to the Traditionalist Youth Network (TYN), which it referred to as a “sister organization.” The white nationalist TYN, which was started earlier this year with Heimbach’s help, appears to be serving as an informal umbrella for white student unions.

The Georgia State student newspaper, The Signal, noted yesterday that when the WSU’s founder, Patrick Sharp, an 18-year-old student from Birmingham, Ala., was confronted with some of the images on the TYN site, he denied that his group is racist and said that he invited black students to participate. Soon thereafter, the link and reference to TYN as a sister organization had been erased from the group’s website. The TYN, meanwhile, still lists the Georgia State WSU as a chapter.

Sharp may not be open about his white nationalism, but he has left Internet footprints that certainly point in that direction. Earlier this year, for example, he posted at the white nationalist American Renaissance site. The post highlighted a book about 1960s civil rights activities in Birmingham, Ala., by “Paul Kersey,” who blogs at Stuff Black People Don’t Like and at the white nationalist site VDARE. “Seeing as how this is my city,” Sharp wrote, “I’ll have to check this out.”

The Atlanta-based blog Biscuette did its own digging into Sharp and his WSU. In a  post yesterday, “le biscuette” noted that on Sharp’s Facebook page his “likes” included the TYN, a “White History Month” page (a sponsor of an upcoming motorcycle ride against a mythical “white genocide”) and Verum Justica, an anti-Islamic group that models itself after ancient Christian crusaders. He also responded to a post by TYN regarding the formation of the WSU. The profile was unavailable yesterday but was back up today. Nevertheless, it appears Sharp has made most of it private, as the more inflammatory "likes" that Biscuette pointed out are no longer visible, nor are most of his posts.

Heimbach is not so coy about his white nationalism. He recently posted a piece on the TYN site titled “I Hate Freedom,” which said: “Non-whites do not have the rights or freedom to move into white nations. This is our home and our kith and kin. Further, “Those who promote miscegenation, usury, or any other forms of racial suicide should be sent to re-education centers, not tolerated.”

On its website, the Towson WSU links unabashedly to white nationalist websites and to groups like the Council of Conservative Citizens, the descendant of the White Citizens Councils formed in the Deep South to oppose desegregation in the 1950s and 1960s.  The neo-Confederate League of the South is also listed on the Towson WSU site; the League calls for a second Southern secession and a society dominated by whites. American Renaissance is another link; the group’s founder, Jared Taylor, has claimed that, “When blacks are left entirely to their own devices, Western civilization – any kind of civilization – disappears.”

In May, Heimbach announced that the Towson WSU would merge with the TYN.

Heimbach’s co-administrator at the Traditionalist Youth Network is Matt Parrott, former head of an Indiana chapter of the crudely racist CCC and founder of Lighthouse Literature, a white nationalist online bookstore that closed in July 2012 after about 18 months in business

Heimbach’s WSU – a direct descendant of his Towson chapter of Youth for Western Civilization, which collapsed in the spring of 2012 – garnered lots of media attention when it launched “campus patrols” ostensibly to protect students from crime. A February post at the Towson WSU site claimed that the patrols were meant to protect students from “black crime.” The post claimed that, “For those who are not Towson students it seems hard to fathom that every single day black predators prey upon the majority white Towson University student body.”

Heimbach is, in fact, extremely active in white nationalist groups. He is the president of what the CCC calls its Baltimore “subchapter.” He’s also a member of the League of the South and a frequent attendee at white nationalist conferences and gatherings like the recent American Renaissance meeting outside Nashville, Tenn., where he asked speakers how to move forward in creating a white homeland.

The Towson WSU’s notoriety has managed to spawn at least one other imitator. This past spring, Richard Railey, a 57-year-old community college student in Texas, started a white student union (not listed at TYN). He is also attempting to establish a “white history month” on campus to combat what he claims is “discrimination against Caucasians,” and he’s trying to get official college recognition of his group. Railey, who is pursuing a degree in applied science, was in the past elected a Tarrant County, Texas, precinct chair and has served as an election judge. In 2012, he complained to the Fort Worth Weekly that the presence of a copy of Ebony magazine at a polling place was “extremely inappropriate and probably a federal election law violation” because it was “an attempt to intimidate, bully, and threaten white voters.”

Railey, who calls himself “Mstr Rick,” keeps a blog, which links to American Renaissance and to the American Freedom Party (formerly American Third Position), a white nationalist political party. He claims that he has become “enamored” of the “White Ethno-Centrist Movement.” “White people are my people,” he writes, and “challenging the deeply entrenched anti-white bias of multiculturalists [sic] orthodoxies is a moral imperative for whites.”