The mother of a young girl who claims she was molested by former Minuteman leader Chris Simcox says she’s outraged about a 10-year prison sentence being offered by Arizona prosecutors. 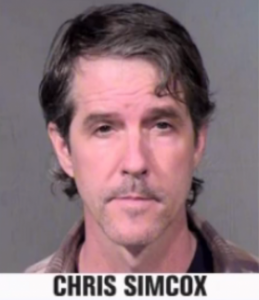 She’s raising questions about the handling of the case by Maricopa County Prosecutor Bill Montgomery’s office. Montgomery has a history of associating with Simcox politically, having spoken at a Minuteman event and participated in one of Simcox’s border watches.

As things stand, the offer of what seems to the victim’s mother like a sweetheart deal may not even be enough to entice Simcox to accept the arrangement. At his most recent court appearance, according to one report, he shook his head vigorously at the mention of a plea deal, appearing to reject it out of hand.

Michelle Lynch, whose daughter was allegedly molested repeatedly by Simcox when she was visiting his home with his own daughter of the same age, is most upset that Simcox could be out of prison in eight and a half years, at age 60 and still capable of harming children again. If Simcox’s case went to trial and he were convicted, he could well be sentenced to prison for life.

She told Stephen Lemons of the Phoenix New Times that the bargain infuriated her. "Essentially, the prosecutor is saying [that once he gets out], they'll just wait 'til he does it again," Lynch said. "Then they'll give him more time. Meanwhile, they're creating more victims."

Lynch said that her daughter continues to have nightmares about her ordeal – which included being molested every time she played with Simcox’s children – and fears Simcox might return to harm her. She is receiving counseling.

All this is occurring within an office overseen by a conservative Republican with a history of dalliances with Chris Simcox and his Minuteman movement. As Lemons reported, the prosecutor – Bill Montgomery, a longtime ally of such Arizona nativists as Sheriff Joe Arpaio and ex-Senate president Russell Pearce – actually appeared at a fundraising event for the Minutemen with Simcox and gave a speech, and on another occasion took part in one of Simcox’s border watches.

Jerry Cobb, the spokesman for the Maricopa County prosecutor’s office, said in an interview with Hatewatch that there was little to no chance that Montgomery could affect the decision on whether to offer a plea bargain in a case like Simcox’s.

“The elected criminal attorney is not involved in any individual cases,” he said. “He doesn’t prosecute cases. He doesn’t approve every individual plea deal. And he doesn’t weigh in on individual prosecutorial decisions that are made. Our plea agreements are constructed based on office policy.”

Cobb also noted that victims and their families are frequently unhappy with plea deals but that such deals do prevent children from having to testify in court. He noted that in Arizona, the victims and their families have a right to address the court before a deal is accepted, and the court has the ability to reject a deal based on those objections.

Simcox is scheduled for a court hearing on Oct. 3. If he refuses the deal, his trial is scheduled to begin Feb. 27. Cobb said that case “is still postured to go to trial.”