A 76-year-old retired U.S. Army colonel is planning an event in Washington, D.C., on May 16, that he hopes will attract millions of antigovernment patriots voicing a “simple demand” – the resignations of President Obama and ranking members of Congress. 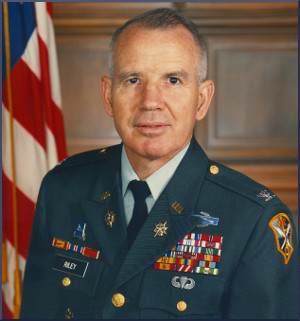 Harry G. Riley tells Hatewatch his “Operation American Spring” is attracting widespread militia support and will be the sequel to last month’s Cliven Bundy standoff in Nevada, “forcing the government thugs to back down in the face of ‘We the People.’”

“It does embolden me and gives me courage,” Riley said of the Bundy standoff, that ended with the U.S. Bureau of Land Management calling off its roundup of the rancher’s cattle for non-payment of grazing fees. Much of Bundy’s support evaporated when he made racist comments.

“The militia groups and the others stood up for Bundy and the government thugs stood down,” Riley said. “I hope people feel the same way about Operation American Spring.”

In fact, Riley said he hopes members of Congress will “come to their senses,” leave their offices and join in the demonstration set to begin in two weeks.

“It’s a sacrificial effort by patriots who believe our nation is in jeopardy,” Riley told Hatewatch today from his home in Crestview, Fla. “Our government at the federal level is totally lawless. Our nation is in grave danger right now of internal implosion.”

While the event is attracting interest from various antigovernment and militia groups, those who join Riley will have to leave their guns behind or face arrest in the District of Columbia.

The group will not apply for a U.S. Park Service demonstration permit “because we are just a bunch of individual patriots who plan on visiting Washington, D.C., exercising our constitutional rights, all at the same time,” Riley told Hatewatch.

“These are individuals who are violating their oaths of office and not following their responsibilities under the Constitution,” Riley said.

Those resignation or impeachment demands, Riley said, will be backed by the forthcoming demonstration – “the only simple way to express the collective voice of ‘We the People.’”

“It grew legs and now we feel the wind of God is behind us,” Riley said in describing the DC rally he first envisioned last December and has promoted through social media and the Internet.

Riley said the effort is also getting support from the Tea Party, Gun Owners of America, the Save America Foundation and Overpasses for America – an antigovernment group whose stated goal is “restoring the republic.”

Riley, describing himself as “in alliance with the Tea Party,” wouldn’t estimate how many of his fellow patriots will meet him in Washington, D.C. “It could be anywhere from a few to several million,” Riley said.

Several state militia groups, which Riley said have between 1.2 and 1.8 million members, are supporting the rally, he said. “It’s really hard to put a name to many of these groups supporting us.”

Riley dismissed those who suggest Operation American Spring will bring “armed violence” to Washington, D.C. in support of its mission to “rid our government of malfeasant bureaucrats.”

“Our rules of engagement are simple: We will be unarmed, non-violent, law-abiding and peaceful,” Riley told Hatewatch.

Sgt. Lelani Woods, a public information officer with U.S. Park Police, said there was little she could say about the planned Operation American Spring gathering, one of scores that occur in the nation’s capital. Woods said the 613 commissioned members of the Park Police, including mounted, canine, motorcycle and aviation units, augmented by the Washington Metro Police Department, will be ready for the event.

District of Columbia gun laws prevent anyone, even law enforcement officers from other states, from carrying firearms in public.

“Those found in possession of firearms will be arrested,” Woods said.

Riley said he and others involved in the “grassroots movement” plan to stay in the nation’s capital until their demands are met. “We are going to be there for days, weeks or months – until we get some resolution to our demands.”

“It would quickly end if 200 or 300 members of Congress would come to their senses and come down and join us, reverse themselves and commit to restoring constitutional law,” he said.

The group plans for live streaming of its activities during the demonstration, and has established a detailed web site, including a “dispelling rumors” link. One rumor addressed by Riley, who worked at the National Security Agency while serving in the Army, is that he is somehow a provocateur or government plant.

Riley said he has had nothing to do with the NSA since retiring from the Army in 1992, ending a career in military intelligence that “centered on the enemy without,” including the former Soviet Union and other perceived Communist threats.

“I’m now the ‘enemy,’’ he said, “and the NSA is probably listening to this conversation.”