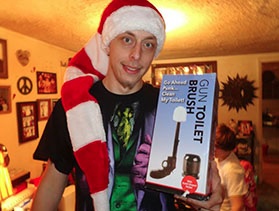 Jerad Miller, the Indiana man who with his wife, Amanda, shot and killed two police officers and a bystander Sunday in North Las Vegas before dying in a suicide pact at a Wal-Mart store, posted several videos at YouTube in the past year that revealed his paranoia and antigovernment views.

One of the videos contains an extended soliloquy by Miller on government drones that turns into a quasi-philosophical rant about the nature of courthouses as centers of “authoritarianism.”

The latter is noteworthy in light of a report by the Las Vegas Review-Journal that among the documents found at Miller’s apartment was a carefully laid out plan to attack an unidentified courthouse building in Las Vegas, taking it by armed force and then executing public officials inside.

The video begins with Miller pulling out a conspiracist magazine devoted to government drones, titled “Drones: Are They Watching You?,” which was published in 2013 under the auspices of magazine publisher Source Interlink – a company that changed its name earlier this year. Miller waxes paranoiac about the likelihood that people like himself are under surveillance by them.

“So are they watching you? Probably,” he says. “I mean, they’re already wiretapping your phones. You know, watching your Facebook and everything.  And they’re probably watching this video of me right now. I don’t care. Congrats. You’re somebody special. You have” – waving his fingers – “clearance.”

After complaining at length about the ankle bracelet he was forced to wear as a result of being placed on house arrest in 2013 (according to the Lafayette Journal & Courier, Miller was accused of violating his in-house arrest twice that year), he turns his attention to the local courthouse near his home, which is within view of his window:

A beautiful building, even though it is a monument to authoritarianism. It’s just a big concrete building a … thing … that people have to go to, or else they go to jail. You gotta go get your marriage license, you gotta go get gun permits – whatever it is, you have to go down to that big stone structure monument to tyranny, and submit, crawling, groveling, on your hands and knees: ‘Oh, give me permission to do this, give me permission to do that.’

I dunno. Sounds a little like Nazi Germany to me. Or maybe Communist Russia. ‘Where are your papers? Do you have the authority to be here? Do you have the right to be here? Where are you going? Where are you coming from? Who’s in your car with you? Can I search your car? Can I stick my finger up your butt? No, oh, that’s probable cause, you probably got drugs up there.’ Because that’s what they’re doing now. They’re sticking fingers up people’s butts – lookin’ for drugs. Big scary drugs.

Really, people? It’s time to wake up. This is getting ridiculous.

Other videos that Miller posted on the channel suggested that he was emotionally devastated by his conviction and sentence for marijuana possession in 2013. In a couple, directed to Amanda Miller, he weeps bitterly as he soliloquizes about how much he will miss his wife while he is in prison, saying she always makes him smile, “no matter how crabby of a mood I’m in because of the New World Order and shit.”

In another video, he frets briefly about the possibility of something monumental happening while he is behind bars: “I pray to God that this Sunday is not the last time I ever see you again,” he says. “I swear to God that they better not f------ do this shit while I’m in jail. I’m pretty sure they won’t. Pretty sure it’s not happening that fast.”

This kind of paranoia is common among antigovernment “Patriot” movement followers, particularly the reliance on conspiracist publications for information. It’s also reflected, with greater intensity, in the Facebook post that Miller published on June 2:

We must prepare for war. We face an enemy that is not only well funded, but who believe they fight for freedom and justice. Those of us who know the truth and dare speak it, know that the enemy we face are indeed our brothers. Even though they share the same masters as we all do. They fail to recognize the chains that bind them. To stop this oppression, I fear, can only be accomplished with bloodshed.

It appears that in the space of the intervening year, Miller’s paranoia graduated from weepy-eyed frustration to boiling hatred. The combination of radical antigovernment views with personal problems has driven others to commit violence in the past, and Miller appears to be the latest to fall into this downward spiral.