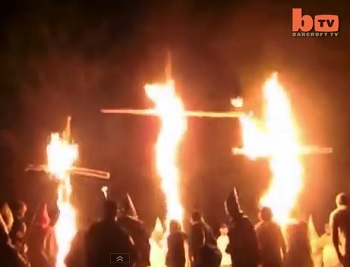 A scene from the documentary

A British television crew filming a gathering of Ku Klux Klansmen in West Virginia this spring recorded one of the group’s leaders discussing a plan to use returning military veterans to train KKK members in combat techniques for “the upcoming battle” – presumably the “coming race war” that the Klan and other white supremacists have long predicted.

The nine-minute video documentary by Barcroft TV is a striking portrait of the Loyal White Knights of the Ku Klux Klan, an organization based in Pelham, N.C., with chapters throughout the South, including this one in West Virginia. It includes some appalling insights into their children’s upbringing and their certainty about a looming social apocalypse.

But most disturbing is the segment in which the hooded Klansman leading the rally tells the crowd about the group’s future plans:

We’re looking at something a little different for probably the next couple of years, trying to get our men and women ready for the upcoming battle that we’re about to take upon us. And this is something that no Klan has ever done, and we’re going to start it. All our boys are finally coming back home from the military, which is good. And we’re getting a lot more military members joining, which is good, as we’re going to start doing a lot more military training.

Now that we got our Marines and our Army back, they’re going to start showing us how to skin, how to survive off the land. We’re going to try to move in another direction with the Loyal White Knights, and that is starting armed training, hand-to-hand combat, and stuff like that, just for the upcoming battle.


The Klansman is not correct, of course – this has been attempted previously by other KKK organizations. Indeed, the presence of far-right extremists within the military is a longstanding problem and frequently involves a Klan recruiter joining the armed forces.

The plan described by the Klan leader in the video is exactly the type of scenario that the Department of Homeland Security warned about in a 2009 law enforcement bulletin:

At the time, the conservative media erupted in anger, wildly distorting the bulletin’s contents on one talk show after another, notably at Fox News. The reportage there – or more precisely, the shouting from their pundits – described the bulletin as specifically singling out veterans and targeting them for suspicion of far-right extremism; claimed that there was no similar bulletin regarding Islamist extremists from the DHS (there was); and said the report was based on nothing but speculation. Fox’s Bill O'Reilly said the report was "unnecessary," cooked up by a bevy of myopic "far-left" bureaucrats who chose to ignore Al Qaeda while pinning the terrorism label on ordinary conservatives.

Eventually, the furor drove DHS to disavow the report and discontinue its task force assigned to monitoring right-wing extremism. In the ensuing years, the DHS bulletin has nonetheless proven to have been remarkably on-target, particularly in the wake of such domestic terrorism incidents involving former military members as the massacre at a Sikh temple in 2012 and the formation of the murderous “FEAR Militia” in Georgia, all of whom fit the bulletin’s profile perfectly.

The Southern Poverty Law Center first drew attention to the issue in 1986, and after a period during which the military subsequently clamped down on extremists within its ranks, the problem returned during the Iraq War, as a 2006 SPLC report explained in detail. A later report in 2008 explored how the problem was worsening with racist skinheads signing up for service overseas.

The FBI drew up its own assessment in July 2008, and pinpointed the potential danger then: “The military training veterans bring to the [white supremacist] movement and their potential to pass this training on to others can increase the ability of lone offenders to carry out violence from the movement’s fringes.”

As criminologist Brian Levin explains in his interview with the Barcroft TV reporters: “I think the real danger does not lie with the Klan being some kind of widespread army that has tentacles across the United States. That’s not going to happen. But what we do have to worry about is individuals, autonomous cells, or duos committing terrorist acts on their own because they get training, they get inspiration, and they get knowhow from being in the orbit of these hate groups,” Levin said. “Loose radicals coming out of that orbit represent a threat of continuing terrorism here in the United States.”