Musab Mohammad Masmari, the man who tried to burn down a popular  gay bar in Seattle on a packed New Year’s Eve, has been sentenced to 10 years in prison.

The sentence, handed down on Thursday, was considered exceptionally stiff, after Masmari had agreed to a plea bargain on arson charges only, meaning he would not face the federal hate-crime charges that were considered in the case. According to the Seattle Times, the sentence more than doubled the time agreed to in the plea bargain. 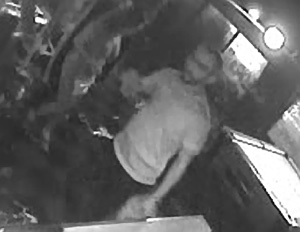 Masmari, a 30-year-old American citizen of Libyan extraction and upbringing, was caught on camera as he carried a container filled with gasoline through Neighbours, a popular bar in Seattle’s Capitol Hill neighborhood, on New Year’s Eve. Shortly afterwards, patrons smelled smoke and found the container on the landing to a set of stairs engulfed in flames; their prompt action quickly doused the fire.

An estimated 750 people were in the bar at the time, and the matter quickly became a hate crime investigation. “It was just a great thing that people acted as fast as they did to put out the fire,” a police spokesperson said. “We could have had mass, mass casualties, and we’re very lucky that that didn’t happen.”

Some of the people present at the bar that night were in the courtroom during Masmari’s sentencing hearing on Thursday. Shaun Knittel, a Seattle LGBT-community activist, said he and others in the community were “disgusted” with the plea bargain’s five-year sentence. Neighbours, he said, was packed that night with “people who are irreplaceable to us.”

“This was a blatant attack on our lives,” he said.

U.S. District Judge Ricardo Martinez told the courtroom he would use his discretion to impose the exceptional sentence because Masmari had clearly targeted his victims because they were gay, and because of the possibility of a huge loss of life.

Masmari, who claimed in a presentencing statement that he had blacked out that night after drinking a bottle of whiskey, did not speak during the hearing. His attorney said the stiff sentence was not entirely a surprise, “due to the political nature of this case.”