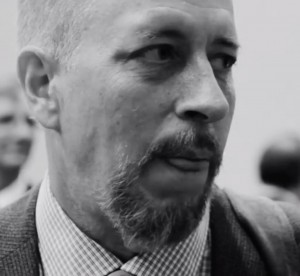 John V. Ellis identified himself as this man on American Renaissance. (Source: YouTube)

Earlier this week, the home addresses and telephone numbers of two reporters for The New York Times and a CNN correspondent appeared across a spectrum a racist websites—an apparent response to the Times publishing the personal information of Darren Wilson, the police officer who fatally shot Michael Brown.

Known as “doxing,” Michael Carothers, the username for Michael Weaver, who has been affiliated with several neo-Nazi groups and a long criminal history, posted the journalists’ personal information on Stormfront, the Internet’s largest racist message board. But very soon afterward, the information appeared elsewhere, on Occidental Dissent, in a piece written by a contributor pseudonymously known as “Jack Ryan.”

“A new low in anti-White gutter journalism was reached this week,” Ryan wrote. “The New York Times published the home address of Officer Darren Wilson with the clear intent of aiding and abetting black lynch mobs to make good on their threat to attack and possibly murder Wilson and his new wife."

In truth, the Times did not include the home address of Wilson, only the neighborhood and street name of Wilson’s home—information that was widely circulated in other media outlets including Yahoo News, USA Today, The Washington Post and others.

Still, “Jack Ryan” went ahead and “doxed” the three journalists who publish using genuine bylines, while hiding behind the name he has used for years to publish racist commentary across a wide swath of the white supremacist web.

“Of course it would be wrong to threaten or harrass [sic] these folks,” Ryan wrote. “[B]ut there’s nothing that says you can’t drop them a card or phone them to wish them happy holidays, or simply to let their neighbors and local law enforcement know how displeased you are with their unprofessional actions.”

It was a tongue-in-cheek disclaimer, surely. As far as racist web portals go, Stormfront remains among the worst. As the Southern Poverty Law Center noted in a special report earlier this year, Stormfront users have been disproportionately responsible for some of the most lethal hate crimes and mass killings since the site was put up in 1995. In the past five years alone, Stormfront members have murdered close to 100 people. It’s not the kind of place one wants personal information posted.

So who is this Jack Ryan?

A Hatewatch investigation under way at the time of the doxing—including examining his extensive posting history on white nationalist sites like VDARE, American Renaissance, Alternative Right, and Occidental Dissent—found that “Jack Ryan” is actually John V. Ellis of Hyde Park, Chicago. An active supporter of the League of the South (LOS), a neo-Confederate hate group, Ellis first came to our attention after appearing at a demonstration in Murfreesboro, Tenn., last year.  His vicious comments online almost immediately caught the attention of Hatewatch.

“Blacks are fairly predictable once you get to know the breed. Here are some tips: Never show fear, indecision. Blacks can smell this, same as dogs,” Ellis wrote on the American Renaissance website. “Always have some weapon that isn’t a gun. I highly recommend canemaster [sic] canes, $12 Target T Ball bat—carry in a gym bag along with ball and glove.”

In another article from Alternative Right, Ellis made some ugly statements about Muslims. “These Arab Muslim mobs are savage, barbarians. … I have a beautiful 23 year old White Daughter, I don’t want any of these filthy, urine colored Arab Muslim savages anywhere near my daughter.”

Ellis, who could not be reached for comment, claims to have have attended Vanderbilt University before completing an MBA at New York University's Stern School of Business. Interestingly, however, he says he works for a painting company in Chicago. He also claims to have frequented many white nationalist conferences, including the 2013 American Renaissance national conference and most recently the VDARE Christmas party in New York City .

Most recently, Ellis says he attended the VDARE Christmas party in New York City where he and featured guest Ann Coulter apparently didn’t get along. “Mean, disrespectful, didn’t recognize Occidental Dissent,” wrote Ellis after the event. “I was very, very close to stripping off her clothes and spanking her bare ass right there.” (Hatewatch could not confirm Ellis’, nor Coulter’s attendance. A telephone message left with Coulters' publicist today was not returned, and Peter Brimelow, who runs VDARE, would not comment. )

Although Coulter didn’t recognize Ellis and the bigotry he spews at Occidental Dissent, hopefully others will now. He’s been long due for a real byline.