Amazon.com, the world’s largest Internet retailer, announced earlier this week that its marketplace had reached a new milestone, surpassing 2 billion items sold in 2014. That figure, according to a recent report from Wired, accounts for more than 40% of all items sold by the company.

As Wired points out, because transactions made through the Amazon Marketplace generate a broker’s fee without the use of any of its physical infrastructure, profit margins are significantly higher for such sales.

But it among those taking advantage of this service—and helping Amazon turn a hefty profit—are white supremacists raising money and spreading hate by selling merchandise through the Marketplace in direct violation of Amazon’s own rules.

As the company’s offensive products disclaimer reads, “Listings for items that Amazon deems offensive are prohibited on Amazon.com. … Examples of Prohibited Listings: Products that promote or glorify hatred, violence, racial, sexual or religious intolerance or promote organizations with such views.”

That hasn’t stopped sellers such as “War Reenactment” from selling white supremacist flags and T-shirts adorned with racist iconography including Nazi swastikas. Even more blatantly obvious in the “offensive products” categories are music CDs available by the bands like Race War, with the album title, “The White Race Will Prevail.”

Amazon isn’t ignorant of these listings either. During a Hatewatch investigation into the sale of white power music on iTunes, a representative from Amazon acknowledged the products were for also for sale by Amazon and said they would be reviewed. The company took steps towards honoring its rules by removing two prominent white nationalist publishing houses, Counter-Currents and VDARE, from its Amazon Affiliates program.

But there are still many racist products available, including a few below. 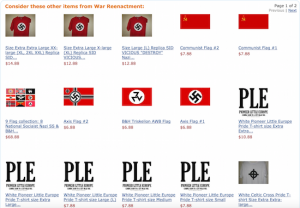 Those products aren’t going unnoticed by white supremacists either. Users of Stormfront, the world’s largest online white supremacist forum, often post links to draw attention to Amazon listings for such items. And why is Amazon better than buying elsewhere, you might ask?

“[B]uy from someone who is not chinese buddhist indian hindu or jew negro,” one Stormfront user said.