Robert Ransdell, the neo-Nazi who ran for U.S. Senate in Kentucky last year under the slogan “With Jews We Lose” – he didn’t win, by the way – was arrested in the Blue Grass State as he prepared to protest a Martin Luther King Jr. Day event in the small city of Florence. 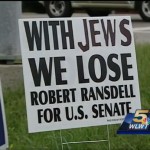 Ransdell, who was carrying a sign that read, “Happy Machin’ Lootin’ Killin’ Day,” was taken away by police on Monday shortly before the event was scheduled to begin at 3 p.m., a spokesman for the Florence Police Department told Hatewatch today. Ransdell was charged with trespassing in a city owned government building.

“I feel depressed at the fact that I was arrested,” Ransdell told the neo-Nazi website, The Daily Stormer. “I have been able to walk that line over the years and it is something I have taken pride in, getting out there balls to the wall and at the same time not being shackled for doing so.”

Ransdell said he was arrested after police – “agents of the Jew-Negro Occupation government,” according to the website – asked him to leave the building and he refused. “It was just the record of token harassment I have got from this city in particular for my political activity in the past,” he said, “that moved me to just refuse to be bullied around anymore.”

Ransdell said he was released on his own recognizance and had to walk more than 10 miles back to his car. All the way, he told the website, he held up his sign to passing motorists, continuing his protest against “this rotten, phony, hypocritical, Jew-controlled, non-White infested shithole of a country.”

It was the first time, Ransdell told the website, that he had been arrested in his 10 years as a white nationalist activist. He added that he remains committed to the cause and will be back protesting in no time. “We have hoax remembrance day coming very soon,” he said, referring to Holocaust Remembrance Day, “so there will not be long to wait.”

But Gliebe resigned last October and William W. Williams, known as “White Will,” was elected chairman of the Alliance. Williams responded in the comment section of The Daily Stormer to Ransdell’s recent arrest. “He’s a self-centered grandstander who now finds himself a defendant in a minor criminal matter,” Williams said. “That’s what he wanted. He’ll milk the situation for all it’s worth but it will ultimately gain nothing for the cause.”

Calling Ransdell “a self-centered grandstander” is mild compared to how he was described last fall by white nationalist Internet “comedian” Paul Ramsey, aka RamZPaul.

“He’s a walking cliché,” Ramsey said in a You Tube video. “He says all the cliché, neo-Nazi, white supremacist, white nationalist things.”

He called Ransdell a “fake” whose shtick is “so over the top” and asked “why are all these guys who are so obsessed with the Jews, why do they look so Jewish?”

Ramsey said the media loves Ransdell because he makes it look like everyone associated with white nationalism is “a f------ kook.”

The title of the video was “With Clowns We Go Down.”