Nestled in the rolling hills of the Ozark Mountains, Harrison, Ark., has a refurbished old-time town square and a steadily growing community college. Yet, like scores of small cities and towns across the country, the town could always use more tourist dollars and new businesses. 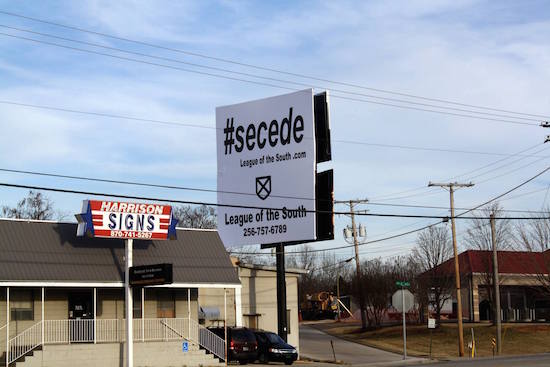 What the largely white city of 13,000 residents does not need is another racially provocative billboard, churning up its ghosts and scaring away potential industry and employees. But that is exactly what Harrison got Tuesday when the neo-Confederate Alabama-based League of the South (LOS) unveiled its latest billboard, once again plastered with the group’s one-word silent scream, “#Secede.”

The League, which advocates for a second secession—like the first went so well—and a society dominated by “European Americans,” has previously placed billboards in Florida, Tennessee, Georgia and Alabama. But this is apparently its first foray into Harrison, the site since 2013 of a war of words and billboards that has pitted white nationalists against the city and the Harrison Community Task Force on Race Relations.

Recently, a group of local high school students joined the fray, launching a Twitter and YouTube campaign promoting diversity and tolerance in their hometown. The student led effort is called #IAHARRISON.

“Once again Harrison is on the front lines to be victimized, criticized and condemned,” Layne Ragsdale, a Task Force member told Hatewatch. “Yet, now it seems that our most effective defense may be a group of teenagers using social media to tell their positive stories. That says much more about our community than a mere billboard.”

The Harrison billboard war began in Oct. 2013 when the first racially charged sign went up, proclaiming in big black letters the white nationalist mantra, “Anti-Racist is a Code Word for Anti-White.”

But no one claimed responsibility for leasing the space and there was nothing on the billboard to indicate who was behind it.

The Task Force countered with two billboards of its own that read, “Love your neighbor.” Below that ancient plea was a quote from Dr. Martin Luther King Jr.: “Hate cannot drive out hate; only love can do that.”

The owner of the billboard company, Claude West, refused to reveal the identity of the customer or take down the sign despite what he said was intense pressure from the city, “the Task Force, the alternative life-style people, gays, whatever at the college.”

“I went through hell,” West told Hatewatch. “My life was threatened. I came to the conclusion that I would stand up for the First Amendment. This was a life changing experience.”

As it happens, the League’s “Secede” billboard is located a few yards from the front door of West’s sign company. He said he is in the billboard business and as long as the sign “isn’t obscene” he is willing to lease the space. The lease is for no less than a year. “I don’t discriminate,” he said.

West said a couple of men came into his shop a few weeks ago and said they belonged to a “Christian group” that wanted to rent the billboard. “They want to get someone’s attention,” he said. “I don’t think people are real happy with the way the country is going.”

West also said that after his experience with the first anonymous billboard, he now requires every sign to include identification of the person or group responsible for it. In December, a Ku Klux Klan faction about 15 miles outside of Harrison included a link to its website when it openly leased space on one of West’s billboard’s in the city. The sign read, “It’s Not Racist to [Heart] your People.” And the League has included its name and a telephone number on its Harrison “Secede” sign.

“When I first saw it, I thought, ‘Here we go again,’” said Nate Jordon, a member of the Task Force, who is writing a history of Harrison. “It doesn’t surprise me that they chose Harrison. It seems Harrison has become a focal point for hate groups.”

Jordon said he also was not surprised that the “Secede” sign went up soon after the high school students began their social media pro-diversity campaign.

“They are posting videos and tweets to voice their opinion as young people, as a community, we are not racist, we do not stand with these racist hate groups,” Jordon said. “A lot of people are supporting them, but there has been a backlash from the hate groups. They have attacked their Twitter page. They have denigrated the high school students, speaking as they usually do in hyperbole and lies. The kids have really ruffled the feathers of the hate mongers in the area.” 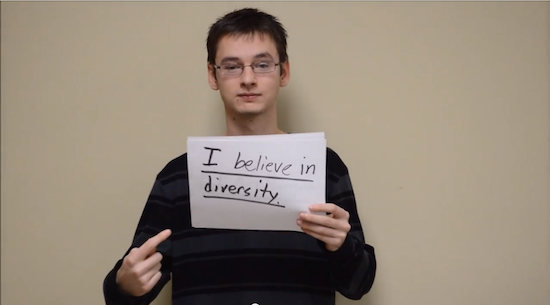 The #IAMHARRISON YouTube videos are simple, short and sometimes powerful. “I am Josh,” it says on a piece of typing paper, held in front of the camera by a thin teenager with glasses. “Harrison is my home.

“I believe in diversity,” it says on another piece of paper Josh holds before replacing it with “#I Am Harrison.”

Mariah lets her signs do the talking. “This town is small and close-knit, but we are not all white and we are not racist. Please know us before you label us.