Ann Coulter’s latest book, “¡Adios, America! – The Left’s Plan to Turn Our Country Into a Third World Hellhole” hit the shelves late last month and is currently sitting at the #18 spot on the New York Times best sellers list. 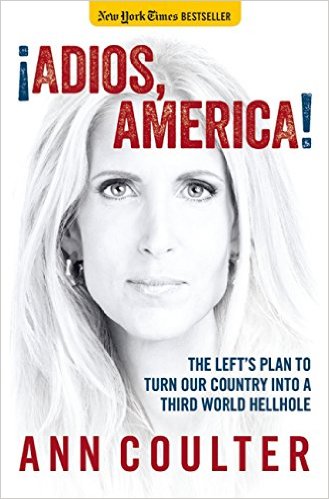 Predictably, the radical right has lauded Coulter’s anti-immigrant screed, with many calling for the GOP to take up Coulter’s stance on immigration.

On June 16, Coulter did a live webcast hosted by the anti-immigrant group NumbersUSA. During the show, both Coulter and the NumbersUSA staff encouraged listeners to immerse themselves in the almost 100 pages of endnotes in Coulter’s book to get further educated on the immigration issue.

Hatewatch staff decided to take Coulter up on her offer. An investigation into the book’s 89 pages of endnotes reveals that she routinely cites white nationalists, anti-Muslim activists and anti-immigrant groups in her latest screed.

Here’s a rundown of the cast of extremist characters Coulter cites:

Jason Richwine – Disgraced Former Heritage Foundation Senior Policy Analyst
Jason Richwine came to prominence during the most recent major push for comprehensive immigration reform in 2013, when he co-authored a report for the Heritage Foundation on the “costs” of undocumented immigration. Coulter cited the report in her book. After the report was published, a number of immigrant and civil rights organizations discovered his racist ties. For example, he penned articles for the white nationalist blog Alternative Right, founded by Richard Spencer, a leading white nationalist ideologue.

Richwine’s 2009 doctoral dissertation at Harvard makes the standard white nationalist claim that there are deep differences in intelligence between races, and that there may be a genetic component to those differences, which, he argues, are persistent over time. He wrote that, “No one knows whether Hispanics will ever reach IQ parity with whites, but the prediction that new Hispanic immigrants will have low-IQ children and grandchildren is difficult to argue against.” What does that mean with regard to immigration into the U.S.? Richwine argues for simply testing the IQ of those who want to immigrate, excluding those with lower scores. Coulter also cites Richwine’s dissertation in her publication.

That wasn’t the first time he has made statements like that. Five years ago, Hatewatch noted that when Richwine was a fellow at the conservative American Enterprise Institute (AEI) earlier in 2008, he also compared the intelligence of earlier, mainly white settlers favorably to later, mostly Latino ones. “The argument that immigrants themselves are no different from the ones that came 100 years ago I think is quite wrong,” Richwine said in a discussion at AEI that aired on C-SPAN, “and I think that the major difference here is ethnicity — or race, if you will. Races differ in all sorts of ways, and probably the most important way is in IQ.”

Peder Nøstvold Jensen aka “Fjordman” – Norwegian Anti-Muslim Blogger
In chapter 10 of her book, Coulter cites the Fjordman blog, founded by Peter Jensen, a prolific anti-Muslim blogger. The anti-fascist group HOPE not hate describes Jensen as “arguably the single most important influence on Anders Breivik.” In 2011, Breivik set off a bomb outside government buildings in Oslo, Norway, killing eight and injuring over 200 before he traveled to the island of Utøya and murdered 69 more, many of them teens participating in a summer camp organized by the ruling Norwegian Labour Party. Breivik’s reasons for committing this horrific act of domestic terrorism: blaming the government for allowing Norway to be “invaded” by Muslims.

After the Breivik murders, Jensen stopped writing and relocated to Denmark, but an archive of Jensen’s anti-Muslim articles is still online today. In it are pieces with titles such as “Does Global Warming Cause Rape Waves?,” “Creating a European Indigenous People’s Movement” and “Why Muslims Like Hitler, but Not Mozart.”

Robert Spencer - Co-founder of the anti-Muslim hate group Stop Islamization of America
In chapter seven of her book, Coulter cites an article on JihadWatch, a blog managed by Robert Spencer, one of the leading anti-Muslim activists in the country. Spencer insists, despite his lack of academic training, that Islam is inherently violent and that radical jihadists who commit acts of terror are simply following its dictates. Spencer argues that radical Muslims, like Osama bin Laden, are interpreting the Koran properly. Peaceful and moderate Muslims, according to Spencer, either do not understand their own holy book or are faking their moderate stances. Spencer’s writings on JihadWatch were cited dozens of times in a manifesto written by Anders Breivik. Spencer was banned from the United Kingdom as an extremist in July 2013.

Peter Brimelow – English White Nationalist – Founder of the Racist VDARE
In Chapter 16 of her book, Coulter cites a blog by white nationalist Peter Brimelow written on his racist website VDARE. In her NumbersUSA webcast earlier this month, Coulter praised Brimelow for his book, “Alien Nation,” published in 1995. Brimelow’s book argued that America is historically white-dominated and should stay that way and described the role of race as "elemental, absolute, fundamental." Though most of the content on VDARE focuses on immigration, Brimelow also gives a platform to a number of other haters including Kevin MacDonald, one of the most important anti-Semites in America and Jared Taylor, thought of as one of the premier white nationalist ideologues of the past quarter century. Many of Coulter’s syndicated columns are also housed on the VDARE site.

Center for Immigration Studies– The Anti-immigrant Movement’s Think Tank
As Media Matters succinctly reported earlier this this month, Coulter’s book is chock full of talking points from the organized anti-immigrant movement in the United States. In fact, Coulter cites the anti-immigrant think tank Center for Immigration Studies (CIS) at least once in each of the first seven chapters of her book. CIS was created in 1985 by white nationalist John Tanton, the founder of the modern-day anti-immigrant movement. Tanton once wrote, "I've come to the point of view that for European-American society and culture to persist requires a European-American majority, and a clear one at that." The longtime head of CIS is Mark Krikorian. After the devastating earthquake in Haiti in 2010, Krikorian wrote, “My guess is that Haiti’s so screwed up because it wasn’t colonized long enough.”

Last month, Hatewatch wrote about Coulter’s history of racist statements, many of which echo points made by a number of leading white nationalists. After examining the endnotes from her new book, it is clear that she has no issue citing these figures in an attempt to justify her positions.