Just two days before the Council of Conservative Citizens (CCC) was scheduled to hold its annual gathering at the Guesthouse Inn in Nashville, Tenn., the conference was cancelled. 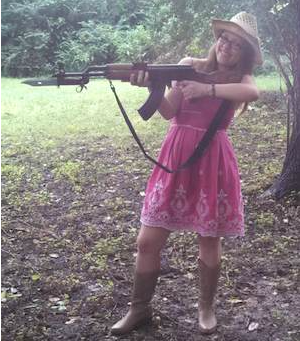 Renee Griffin posing with an AK-47

According to a Facebook post by Renee Griffin, daughter of the CCC’s late CEO and founder Gordon Baum, the hotel was receiving threats and protesters were showing up after Hatewatch reported on the event earlier this week. “So the hotel caved and cancelled us last minute,” Griffin said in the Facebook post. “This is very upsetting because it was the conference to discuss our future.” Griffin is married to Brad Griffin, who sits on the CCC’s board and is the founder of the white nationalist site Occidental Dissent.

The conference was scheduled to start Friday, August 21, just a couple of months after the horrific occurrence at Emanuel African Methodist Episcopal Church in Charleston, S.C., where nine African Americans were shot to death. The alleged killer, 21-year-old Dylann Storm Roof, cited the CCC’s website as his gateway into racial extremism in a manifesto he put online before the shooting. 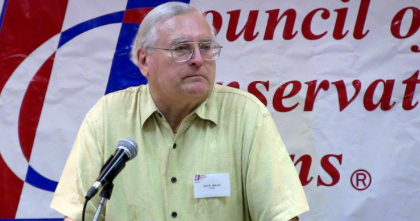 The CCC apparently did not want to draw attention to this weekend’s gathering, which was not announced on the CCC website or on major racist forums like VNN or Stormfront. Speakers were to have included Jared Taylor, founder of American Renaissance, who had been tapped for the keynote address. Taylor is one of the most influential white nationalists in the country, and following the Charleston shootings, he was appointed CCC spokesperson to deal with the barrage of media requests.

Current president Earl Holt was supposed to have addressed the conference on Saturday. In recent comments, Holt has advocated for the lynching of black people, referred to “nigros” with their “under-evolved Frontal Lobes,” and just three days before the murders in Charleston, suggested taking a gun into the black community to “mitigate” black crime.

Brad Griffin (writing as Hunter Wallace) posted a blog at Occidental Dissent today confirming the conference had been cancelled. Griffin said it was because “SJWs harassed the hotel.” SJW is an acronym for “social justice warriors,” which is used as a pejorative term most often to describe online activists who don’t necessarily believe what they say. In the wake of the attention to the conference, the hotel decided to cancel the conference’s reservations. Griffin told the Tennessean that, “We can’t reserve a hotel conference room without groups organizing out there to make death threats to cancel the conference, certain protests and stuff. One after another, these private hotels fold.” Griffin said that CCC had anticipated about 100 people would attend the conference and he vowed on the blog that, “There are several ways we can hold a conference in the future and avoid this problem. It won’t happen again.”