This coming weekend, the white nationalist group Council of Conservative Citizens (CCC) will hold its national conference in Nashville, Tenn. The event comes just a few months after the horrific shooting at Emanuel African Methodist Episcopal Church in Charleston, S.C., where nine African Americans were shot to death.

The alleged killer, 21 year-old Dylann Storm Roof, was a fan of the CCC. He cited the group’s website as his gateway into racial extremism in a manifesto he put online before the shooting.

The CCC has been in turmoil ever since, having come under extreme media pressure brought on by the revelations in Roof’s racist screed. Despite the unwanted attention, CCC members will gather at the Guesthouse Inn in Nashville starting Friday, Aug. 21 for a board meeting that afternoon and an all day conference on Saturday.

The CCC apparently does not want to draw attention to this weekend’s gathering. The conference was not announced on its website, and major racist forums like Stormfront and VNN do not have any threads about the event.

Many of the CCC’s longtime leadership are scheduled to address the crowd. The keynote speaker is Jared Taylor, one of the most influential white nationalists in America today and founder of the racist journal American Renaissance. In the immediate aftermath of the Charleston shooting, Taylor was appointed CCC spokesperson, answering the barrage of media requests while others cowered in the shadows or went underground. Taylor’s conference topic is “The Way Forward,” which is especially fitting when you consider the fact that since the mid-2000s the CCC has been in decline both in terms of its political influence and its activism.

For years, the CCC had relationships with a number of prominent southern politicians. Former Congressman Bob Barr (R-Ga.) gave the keynote speech at the CCC's 1998 national convention and former Senate Majority Leader Trent Lott (R-Miss.) spoke to the group five times (his uncle was a member). In 1998, when these appearances became a scandal for Lott and others, the Republican National Committee barred its membership from interacting with the group.

Even so, it took a 2004 investigation by the Southern Poverty Law Center (SPLC), which revealed that no fewer than 38 federal, state and local elected officials had attended CCC events between 2000 and 2004, to finally make the group toxic for elected officials. While many of the local chapter’s of the organization remain in various locales around the South and East, their activism and membership are not what they once were. 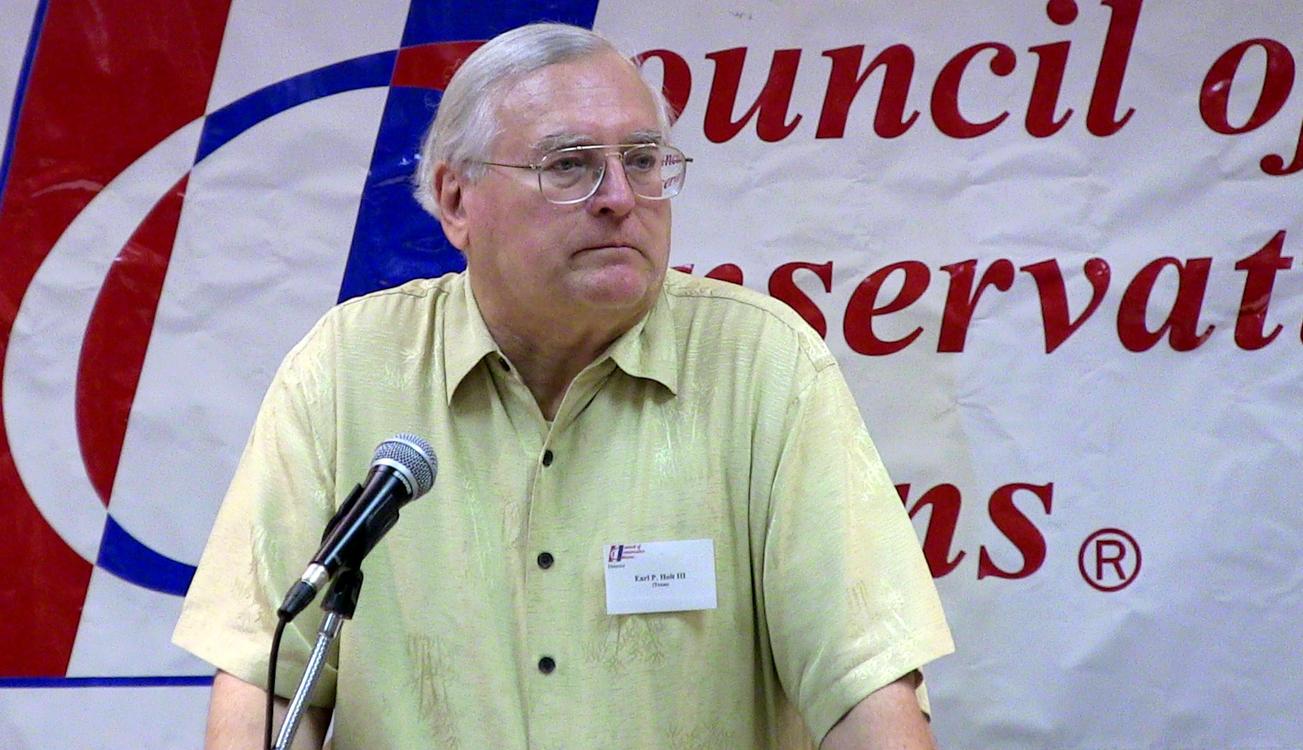 Earl Holt, current president of the Council of Conservative Citizens

The CCC’s president, Earl Holt, will speak on Saturday. Despite his title, Holt refused to engage the media following the Charleston shooting. An SPLC investigation into online comments made by Holt in the months prior to the shooting may indicate why he decided to remain silent.

For example, less than three days before Roof’s rampage, Holt suggested taking a gun into the black community to help “mitigate” black crime. Holt posted his comment in an article published on the CCC’s website, writing, “Old guys like me should dress in a disheveled manner, pretend to be intoxicated, hang-out in ‘the hood,’ and bring along a large-caliber handgun (with backup!) and help mitigate violent black crime at its source…”

Almost as if in response to this suggestion, Roof wrote in his manifesto: “I have no choice. I am not in the position to, alone, go into the ghetto and fight. I chose Charleston because it is most historic city in my state, and at one time had the highest ratio of blacks to Whites in the country. We have no skinheads, no real KKK, no one doing anything but talking on the Internet.” 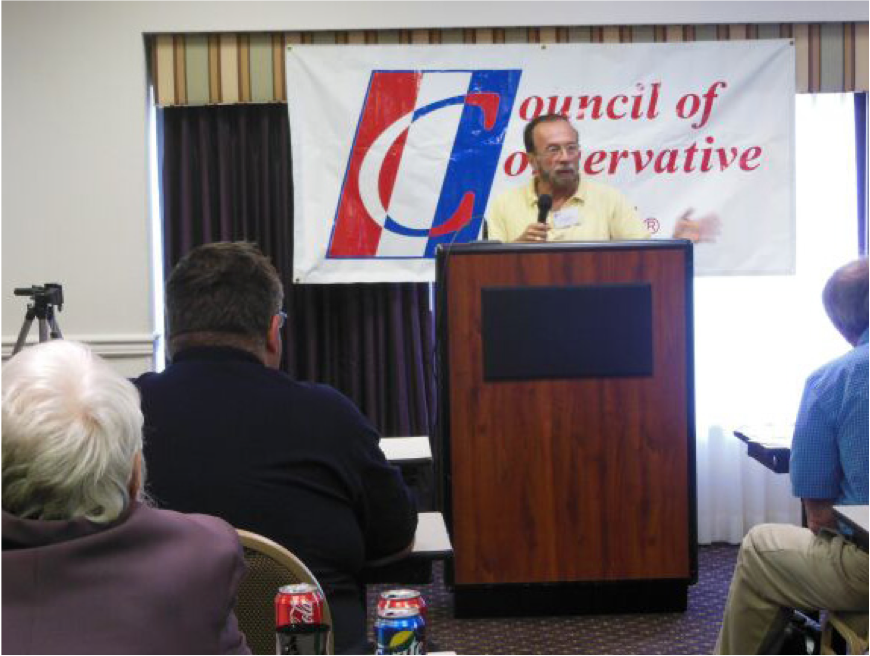 The CCC’s founder and longtime CEO Gordon Baum did not live to see the fallout from the Charleston shooting. He died in March of this year. His successor is another longtime CCC activist, Nashville-based attorney Keith Alexander. Alexander is well known in white nationalist circles as the co-host of the anti-Semitic and racist radio show Political Cesspool founded by James Edwards, a Memphis-based white nationalist and CCC board member. In 2009, Alexander received the CCC’s “appreciation award” at its national conference.

At the Council’s 2013 conference, Alexander told attendees there are two things white Americans can’t talk about candidly and honestly: Race and Jewish power and influence. Alexander said blacks didn’t organize the Civil Rights Movement by themselves. Jewish smarts and wealth were a major factor.

“We have a saying in Memphis,” he said, “blacks can’t organize a two-car funeral.”

One notable absence on the agenda this year is CCC webmaster Kyle Rogers. After Roof’s manifesto came to light, Rogers went underground, and for good reason. He, more than anyone else in the CCC, may have been responsible for Roof’s ideological escalation.

The event that truly awakened me was the Trayvon Martin case. I kept hearing and seeing his name, and eventually I decided to look him up. I read the Wikipedia article and right away I was unable to understand what the big deal was. It was obvious that Zimmerman was in the right. But more importantly this prompted me to type in the words ‘black on White crime’ into Google, and I have never been the same since that day. The first website I came to was the Council of Conservative Citizens. There were pages upon pages of these brutal black on White murders. I was in disbelief. At this moment I realized that something was very wrong. How could the news be blowing up the Trayvon Martin case while hundreds of these black on White murders got ignored?

Roof may have never stumbled upon the CCC website if it wasn’t for Rogers. Rogers is the mastermind behind the CCC’s push to bring attention to black on white crime. Rogers has posted countless items on the CCC website, falsely contending that any crime between people of these two different races where the victim is white is a hate crime. This brand of racist opportunism, exemplified by Rogers’ coverage of the Trayvon Martin shooting, is a staple of his and the CCC’s media plan. 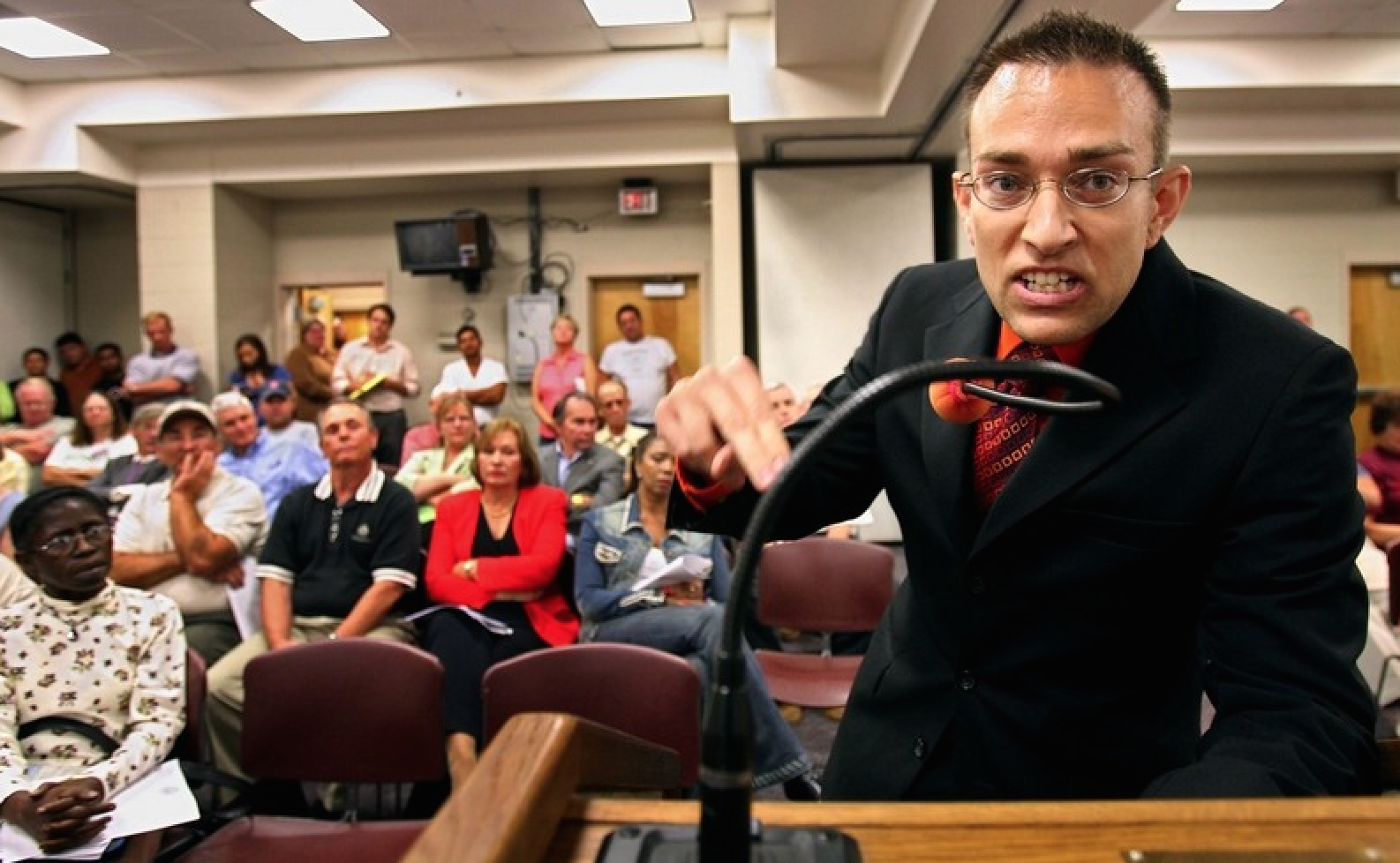 And it has worked. On Feb. 6, 2012, in the midst of the Council’s coverage of the Martin shooting, the CCC’s website topped 170,000 unique visits in a single day. Such successes have emboldened Rogers and the CCC’s web team, resulting in similar breathless coverage following the 2014 death of Michael Brown in Ferguson, Mo., and the social unrest that followed. Based on Roof’s manifesto, this media strategy successfully recruited Roof into the radical right.

Another possible absentee may be Canadian neo-Nazi and CCC board member, Paul Fromm, who has attended countless Council events. Fromm was denied entry into the U.S. in late June, when he was due to travel to Tehchapi, Calif., to attend Camp Comradery, an event cosponsored by the white nationalist American Freedom Party (AFP). Fromm was invited by AFP president William Johnson to give a speech there. It is unclear whether Fromm will be allowed entry to attend the event in Nashville this weekend.

The aforementioned Johnson is the only non-CCC affiliated speaker scheduled to speak in Nashville. Johnson will talk about the “Benefits and mechanics of a CCC partnership with the American Freedom Party.” In contrast to the CCC, AFP has been very active recently, most notably in the buildup to the 2016 election, where it is running a presidential candidate on an explicitly racist platform. In a recent interview with Hatewatch, Johnson seemed unsure about a partnership with the CCC, which he called “unlikely to happen.” He also claimed the CCC “is a little bit concerned their reputation is being besmirched because of the news.”

Unlike many other hate groups these days, the CCC’s agenda lacks the presence of younger activists. While other white nationalist groups such as the AFP and the neo-Confederate hate group League of the South (LOS) have made a conscious effort to reach out to young people, either by creating youth factions or allowing youth to take up leadership roles, the CCC has chosen not to take this path, probably to its long-term detriment.

For the past decade, the CCC has steadily lost influence, activism and leadership. The loss of its founder, followed by the backlash against the group in the wake of the Charleston shooting, has hurt the organization tremendously. The conference this weekend will likely be a good indicator as to future viability of the group.