For more than 20 years, The Barnes Review (TBN) has been one of the most vile anti-Semitic publications around, known for historical revisionism, Holocaust denial and a complete whitewashing of the horrors of Hitler and the Nazi party. And the fall issue is no different –– except for one striking article from a man who you’d least expect to see. 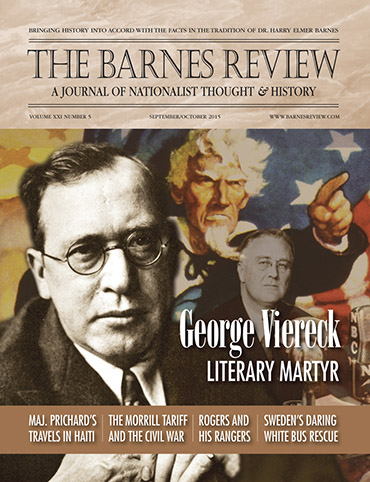 Along the usual mix of essays, the journal’s fall issue also features an article from League of the South president Michael Hill called “The Politics of Provocation: Spiraling Out of Control.” The brief essay is as much a lament of defeats the LOS and the Confederate flag have suffered in the wake of the Charleston massacre as it is a recap of events.

But it’s more, too. Hill has an axe to grind, and he doesn’t seem to mind if he has to turn to an anti-Semitic journal to find an audience willing to hear him out.

“In this very hostile anti-White and anti-South environment, it would be wise for us in the Southern nationalist movement to be ‘situationally aware’ in all matters. The Left smells blood, and it is retained by no morality and seemingly very little by law,” Hill wrote. “Be cool: don’t be provoked.”

The essay is benign enough, especially when compared to others that have appeared in the pages of TBR. Hill complains about the firing of Anniston Police Lt. Josh Doggrell after Doggrell’s membership in the League was discovered. He defends Kyle Rogers, whose incessant listings of alleged black-on-white crimes Dylan Roof cited in his alleged manifesto as an inspiration to kill nine people at the Emanuel African Methodist Episcopal Church in Charleston, S.C., on June 17. Yet with Hill’s gradual fall into anti-Semitism over the last year, publishing the tired argument of Southern persecution in TBR’s pages raises serious questions about what audience Hill is trying to cultivate, and, by extension, what audience TBR wants.

The essay comes in the wake of other statements Hill has made suggesting his own brand of extremist ideology has evolved from the staid arguments of an aging academic and into the firebrand pronouncements of true-to-form racist.

Earlier this year, Hill publicly welcomed the idea of a race war and privately, in leaked Facebook correspondence, encouraged his fellow Southern nationalists to do the same. He has also named “negro rule” and the “Jew/Liberal gentile coalition” as the primary enemies of white civilization.

“Negro rule is disastrous to civilization and dangerous to White lives and property,” Hill wrote in an article published on the League’s website as riots were threatening Baltimore. “That is why our White European civilization has been in the cross hairs of the Jew/Liberal gentile coalition. We have refused to believe their fairy tale about Negro equality.”

In his long descent into extremist ideas, Hill has taken many stops. But even with that history, it’s surprising to see him looking for allies with Third Reich sympathizers.