Angelo John Gage, chairman of the white nationalist National Youth Front, steps down as the group faces fundraising issues and a name change after a threatened lawsuit.

Citing the need to focus on the forthcoming birth of his first child, Gage has passed the reins at NYF to the organization’s longtime vice-chairman, Nathan Damigo.

“I officially resign from the NYF & will be going my own way,” tweeted Gage. “I did my part to make that baby grow and now they are ready to go own [sic] their own.” 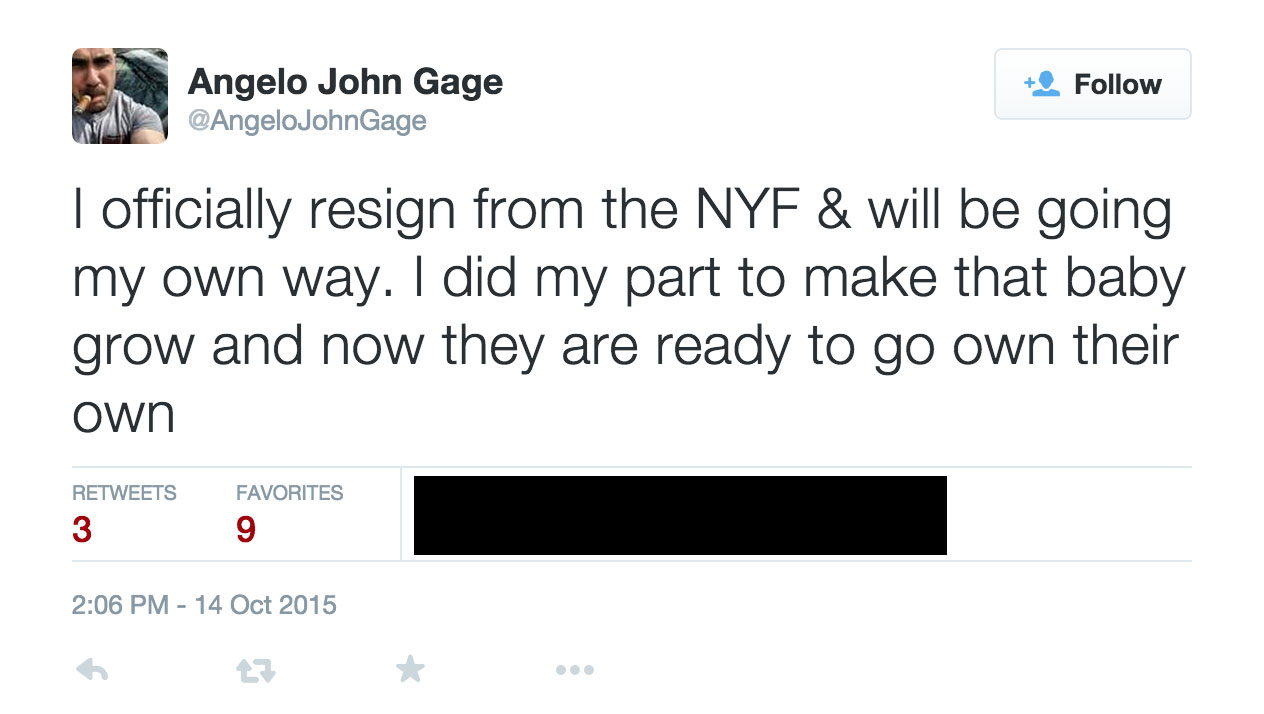 NYF, which is the official youth wing of the white nationalist political party, American Freedom Party (AFP), is focused on recruiting young adults, 18-35, into white nationalism. Membership is reciprocal with AFP. NYF members are automatically registered with the group once they’re older than 35. Gage was once a congressional candidate with AFP.

New chairman Damigo is a two-tour veteran of the Iraq war who served jail time following a conviction for pulling a gun on a La Mesa, Calif., cab driver in 2007 after a night of binge drinking. He has his work cut out for him with NYF. A lawyer representing an organization called Youthfront threatenened to sue NYF for damages if it didn’t cease using its current name, so NYF changed its Facebook profile to read “The Dispossessed.”

“This is a trap that our organization could not survive once stepped into,” wrote Damigo on the now nameless organization’s website. “It would drain us financially, and we would be unable to recover. Win or lose in court, we would still lose.”

The name change comes on the heels of two other recent defeats for NYF. The crowdfunding site GoFundMe suspended NYF’s fundraiser for violating the company’s policies. The group had raised nearly $700 in ten hours for a printer. Then, after moving to a the Indiegogo fundraising platform, and raising the necessary $3,500 in three days, NYF again had their account suspended for policy violations. (It’s unclear which policies the sites claimed NYF had violated.)

Though NYF garnered a lot of press for aggressively targeting college professors at Arizona State University and Boston University who taught courses that the organization deemed “anti-white,” it has since fallen largely quiet.

Even with pleas from Gage in his farewell video to not lose faith in him or the organization, its future seems to be in doubt. Its typical boisterous claims that “Nothing will stop us” have never seemed so hollow.