The revamped comic-book hero takes on masked, armed border vigilantes – and given the history of such militias, it's not a stretch.

There’s a new Captain America, and he’s black. Not only that: His first villains are border militiamen.

Repeating what happened a few years ago when Marvel Comics’ film franchise cast a black man (Idris Elba) in the role of the Viking demigod Heimdahl, white nationalists have erupted in grumbling and outrage over the iconic comic hero’s change in race – perhaps somewhat predictably.

But it is the use of border militiamen as the first villains confronted by the new “Cap” that has mainstream conservative pundits in an uproar. They appear to continue to believe that armed border-militia “minutemen” who sometimes patrol the U.S.-Mexico border are just ordinary conservatives.

However, that just isn’t true. In reality, the border-vigilante movement has been a cesspool of criminality that frequently attracts sociopaths and charlatans.

Mainstream pundits confuse nativist extremists' views with their own.

Marvel Comics editors re-launched their comic book in the summer of 2014 as the “All New Captain America,” reflective of the comic-book giant’s desire to remain current with younger readers. One of the changes in the book involved retiring Steve Rogers, the Caucasian character who has been Captain America’s “secret identity” since the 1940s. Editors chose the character of longtime Avenger Sam Wilson, a.k.a. the Falcon and an African American, to replace Rogers.

In his first issue as “Cap,” published just this month, Wilson goes up against a group of vigilante border watchers who call themselves the “Sons of the Serpent” and kidnap and harass immigrant border crossers.

“Attention all trespassers! I am the Supreme Serpent!” the masked leader tells the hapless immigrants he has caught. “By invading this sovereign land, you defy the laws of God, nature and the United States Constitution! Therefore, I hereby apprehend you by the power vested in me by the aforementioned God, nature, et cetera, et cetera.”

An immigrant pleads that he doesn’t want any trouble, and the masked villain replies: “Oh, I believe you, sir. I can see you have enough trouble with you already, trouble and disease and crime weigh heavy on your backs.”

“Until the mighty wall is built,” the villain adds, “you come here for employment that is rightfully ours! And if denied it, you seek welfare paid for by our tax dollars! Also, you know how you make me press one for English at the beginning of every call to my satellite provider? That is something I cannot abide!”

In the end, “Cap” thrashes the vigilantes and sends them packing, musing as the narrator: “I mean, come on. Who wouldn’t want to punch these guys at least a little, right?”

These scenes provoked an outcry from a number of mainstream conservative outlets, who for some reason saw themselves in the people the superhero was beating up. The Koch-funded MacIver Institute was one of the first to raise the alarm, followed by the Washington Times, the Daily Caller, and Breitbart News. A number of conservative pundits, including Allen West, followed suit, all complaining that Captain America was making conservatives out to be villains.

On Fox News’ morning show Fox & Friends, Tucker Carlson, Clayton Morris, and Heather Childers all discussed the comic, appalled that “conservatives” were being so badly maligned.

“The [Supreme Serpent] is an American who has misgivings about unlimited illegal immigration and the costs associated with it,” Carlson explained. “And that, according to the comic book, is evil.”

“The whole theme is the same,” Carlson added later, “which is that out there in the middle of the country between Malibu and Georgetown everyone is an ignorant, snake-handling bigot and they need to be held in place or else they’ll turn this country into Nazi Germany. It’s like, the people who run this country, a lot of them actually believe that. I live near them. They really think that.”

Jim Gilchrist, one of the co-founders of the Minuteman Project, protested vigorously about the villainization of the border watchers. And at the white nationalist site VDare, much of the disgust revolved around Captain America’s new race as well as his new villains. (At the neo-Nazi site Stormfront, the change in race had long been a topic of disgruntled discussion.)

Whether or not the border vigilantes make appropriate comic book villains for Captain America to combat is a question best left to editors, creators, and readers. But there should be no confusion about whether the militiamen who have populated the border-vigilante movement since its inception a decade ago are ordinary conservatives who “have misgivings about illegal immigration,” as Carlson put it. They are not.

It is one thing to have such misgivings, but it is another thing entirely to take the law into your own hands by going out on potentially dangerous foot patrols in the desert while heavily armed and to brandish weapons at immigrants, sometimes arresting them – which is what border militiamen such as the Minutemen often do.

And while such activities have indeed attracted a fair number of well-meaning, ordinary conservatives, they have also attracted a large number of criminals and sociopaths, a number of whom have assumed leadership roles within the border movement. Much of that attraction is attributable to the nativism that drives the movement and the frequently violent and vicious rhetoric the border watchers use in their everyday discussions of immigration. 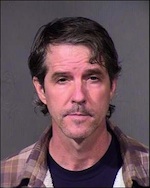 No one embodies that tendency more than Chris Simcox, who cofounded  the Minuteman Project with Jim Gilchrist. The former California schoolteacher turned Arizona desert rat had a long history of unstable behavior that contributed to the split between his organization and Gilchrist’s shortly after their project’s April 2005 launch.

Simcox was arrested in July 2013 and charged with three counts of child molestation — later reduced to two — after his then-6-year-old daughter and one of her friends, age 5, accused him of sexually assaulting them. The trial is currently on hold after a lengthy dispute over whether he would be permitted to cross-examine the alleged victims (which he won). If convicted of the felony charges, Simcox could face life in prison.

Even before Simcox came along with his Minuteman concept, one of the early border-militia organizers who preceded him also had a number of brushes with the law. Casey Nethercott, another Arizona resident, was involved in a border-watch operation called Ranch Rescue at the turn of the century, and he too had a number of criminal legal problems. 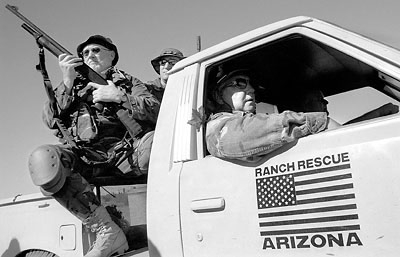 The vigilantes of 'Ranch Rescue' at work

Nethercott — who had done prison time in California for assault in the 1990s — and some of his fellow Ranch Rescue members in 2003 assaulted two Salvadoran migrants who had crossed the border on foot and wound up on a ranch where the nativist border watchers operated. The migrants were held at gunpoint, and one of them was pistol-whipped and attacked by a Rottweiler. With the assistance of the SPLC, the migrants sued their attackers and won a million-dollar civil judgment against Ranch Rescue, including $500,000 against Nethercott, who also faced criminal assault charges in the case but eventually had them dismissed.

Nethercott eventually left Ranch Rescue and then began organizing his own border watches at a property he purchased in Arizona. Eventually he had a tense standoff with Border Patrol agents at that property; when FBI agents tried to arrest him for his role in that incident two weeks later, they wound up shooting the white supremacist who was accompanying him at the time.

Indeed, while the phrase “rule of law” even today is often bandied about by the remaining bands of vigilante nativists, the record demonstrates that this was a peculiarly flexible concept for many of the Minutemen and their associates. 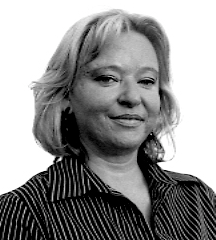 Shawna Forde, for example, incorporated the phrase into the logo for her offshoot border-watch operation, Minuteman American Defense. Forde’s operation was widely promoted at the website of Simcox’s Minuteman Project co-founder, Jim Gilchrist; previously, she had been deeply involved in Simcox’s MCDC operations in Washington state.

Then, in June 2009, Forde was arrested and charged with masterminding the horrific murders of a 9-year-old girl and her father in the small Arizona border town of Arivaca, along with a white-supremacist cohort named Jason Eugene Bush and a local man, Albert Gaxiola, as part of her plan to create a border-militia compound. All three were convicted, and Forde and Bush wound up on Arizona’s Death Row.

After the arrests of Forde, Bush and Gaxiola, Forde’s former associates in the Minuteman movement fled from their onetime protégé. National leaders of the Minuteman movement — particularly Simcox and Gilchrist — hastily tried to put distance between themselves and Forde and her group. To this day, Gilchrist tries to claim that he had little to do with her.

But while Forde’s conviction severely damaged the border-watch movement — as one ex-MCDC leader put it,  “A lot of people felt, well, you’re a Minuteman, you’re a killer” — that was not the end of it. 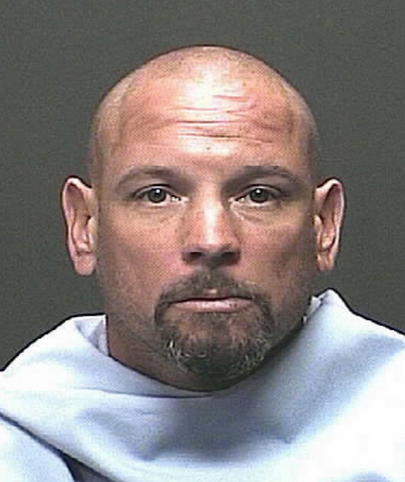 In April 2012, one of Forde’s associates in the desert, a Tucson man named Todd Hezlitt, was arrested and charged with two counts of sexual conduct with a minor for an affair he had initiated with a 15-year-old girl from a local high school where he was an assistant wrestling coach. Two months later, he fled with the girl to Mexico, and he briefly became an international fugitive.

A few weeks after that, the girl turned herself in to the American consulate in Mazatlan. Hezlitt was caught a short time later and extradited. He eventually wound up agreeing to plead guilty to the sexual conduct charges in exchange for not being charged with kidnapping, and was sentenced to six years in prison. 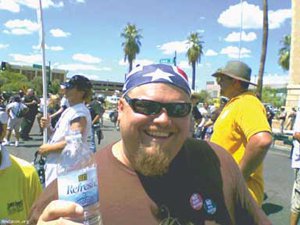 Another violent incident from a former border watcher erupted in Arizona in May 2012 when Jason Todd “J.T.” Ready — a longtime leader of the neo-Nazi National Socialist Movement, and an organizer of independent NSM border watches in Arizona — went on a shooting rampage at the home of his girlfriend.

As Tim Steller at the Arizona Daily Star observed: “Undoubtedly, there have been bordermilitia members in Arizona who have carried out citizen patrols without harboring racist motives or having criminal tendencies. The problem for the movement … is that people with these motives or tendencies have cropped up repeatedly among citizen border-watchers.”

Given that history, Captain America probably has good reason for seeing a border militia gang as villainous. It’s not at all clear why mainstream conservatives, however, would see such a gang as one of their own.