The new issue of the Southern Poverty Law Center’s Intelligence Report, released today, details 10 conspiracy theories that originated on the radical right but have made their way into the political mainstream. Enabled in many cases by leading politicians, these theories have the effect of distorting the democratic process.

The theories, such as the belief that Common Core educational standards are actually part of a globalist plot to indoctrinate young people into the “homosexual lifestyle” and communism, make it doubly hard to deal with the many real problems that confront our society. If we really believe that Mexico has a secret plan to reconquer the American Southwest, it makes it that much harder to fix our broken immigration system. If we think the United Nation’s Agenda 21 sustainability plan is actually a conspiracy to make America a “vassal” of that international body, it may prove impossible to take real steps toward keeping our planet healthy. 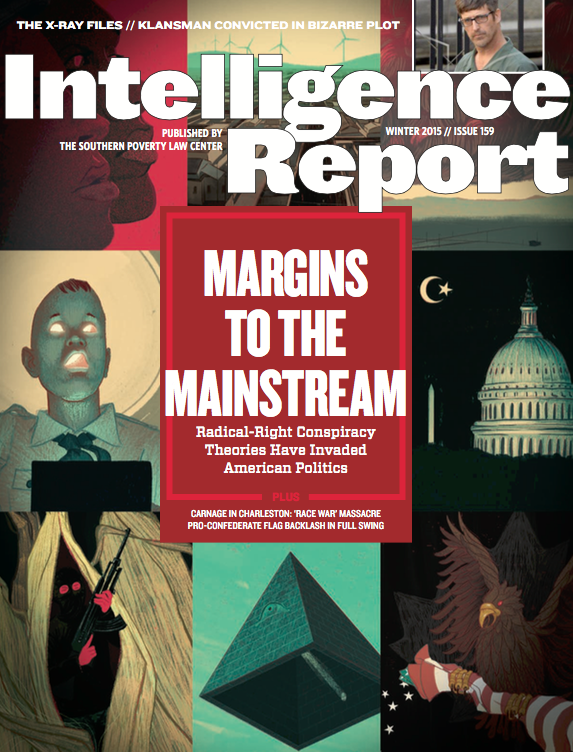 “Outlandish conspiracy theories may be great for the movies, but they’re highly destructive to our democracy — particularly when mainstream politicians and trusted media figures promote unfounded beliefs that trade knowledge for ignorance and reason for suspicion,” said Mark Potok, editor of the Report.

Remarkably, several current candidates for president have embraced portions of these theories despite the lack of any evidence to back them up. Sen. Rand Paul (R-Ky.), for example, has called the Common Core “a dangerous new curriculum,” although it is not a curriculum at all. Similarly, Sen. Ted Cruz (R-Texas) has claimed that Agenda 21 — which is a completely nonbinding plan with no force of law — will “abolish” golf courses and paved roads, an utter falsehood.

The new issue of the Report, which is SPLC’s investigative magazine focusing on the radical right, also includes stories on the white nationalist support being given to another presidential candidate, Donald Trump; the right-wing backlash against criticism of the Confederate battle flag that followed the Charleston, S.C., massacre in June; and a bizarre plot by a Klansman to build a deadly X-ray weapon.

The law enforcement edition of the new issue also includes a new DVD, “Understanding the Threat: The Rise of the Lone Wolf,” that is meant to help police deal with domestic terrorists who operate completely on their own. A recent SPLC study found that lone wolves were behind almost three out of four terror attacks in the United States in the last six years.