On Oct. 25, Kansas Secretary of State Kris Kobach was a featured speaker at a “writers' workshop” put on by the white nationalist The Social Contract Press (TSCP), according to a report from the Center for New Community. For an elected official, this is a problem. 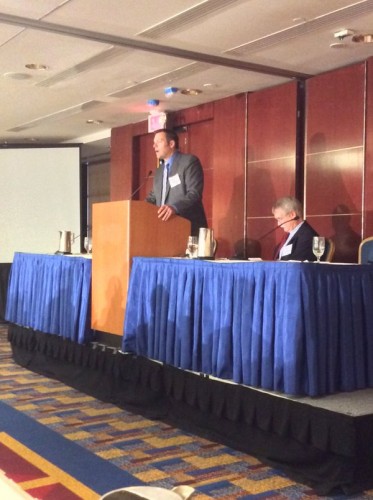 The Social Contract Press is a Michigan-based publishing house that routinely puts out race-baiting articles penned by well known white nationalists. The press is a program of U.S., Inc., the foundation created by John Tanton, the racist founder and principal ideologue of the modern nativist movement and TSCP’s publisher. Tanton has assiduously cultivated relationships with Holocaust deniers, eugenicists and various other extremists over the years. And he’s clear about his racism:  “I’ve come to the point of view that for European-American society and culture to persist requires a European-American majority, and a clear one at that.”

Given TSCP’s publisher, it’s not surprising that articles from their eponymous journal The Social Contract have propagated the myth that Latino activists want to occupy and "reclaim" the American Southwest, argued that no Muslim immigrants should be allowed into the United States and claimed that multiculturalists are trying to replace “successful Euro-American culture” with “dysfunctional Third World cultures.”

Nor should we be surprised that the journal is edited by Wayne Lutton, a longtime member of the white supremacist Council of Conservative Citizens, the hate group that inspired the Charleston mass shooter Dylann Roof. Also on staff is well known white supremacist Kevin Lamb, who was fired in 2005 by Human Events and the Evans-Novak Political Report over his extremist activities.

Kobach’s closeness to hate groups runs far deeper than speaking to TSCP. For years, Kobach has worked as a lawyer for the legal arm of the Federation for American Immigration Reform (FAIR). The Southern Poverty Law Center has listed FAIR as a hate group since 2007—and for good reason.

Tanton founded FAIR, and its current President Dan Stein has said, among other things, “Immigrants don’t come all church-loving, freedom-loving, God-fearing … Many of them hate America, hate everything that the United States stands for.” In another instance, Stein said that the 1965 Immigration Act, which undid four decades of explicitly racist immigration policy in the United States, “was a great way to retaliate against Anglo-Saxon dominance and hubris…and it’s a form of revengism, or revenge, that these forces continue to push the immigration policy that they know full well are [sic] creating chaos and will continue to create chaos down the line.”

One has to wonder if Kobach will be held to the same standard by his fellow Republicans as Rep. Steve Scalise (R-La.) was last December, when it came to light that he had attended a dozen years earlier an event put on by former Klansman David Duke’s European Unity and Rights Organization. Scalise ultimately apologized.

Kobach was at a hate group event last week—not a decade ago.

Of course, Kobach has been working with FAIR for almost decade and no one has held him to account. Worse, in 2012, he dissimulated about his relationship to FAIR and Tanton. In a piece published by Salon, Kobach was quoted claiming that he is “not familiar with [Tanton’s] writings or his views.” He also said: “I have not done any legal work for any organization that expresses or supports racial discrimination, nor will I ever do so in the future.” Just the year before, the New York Times ran a front-page story laying out Tanton’s racism at length.

So what is Kobach’s excuse now? It’s been three years since he was last asked about Tanton by Salon. Surely by now Kobach can no longer play dumb. After all, Tanton is the publisher of TSCP. That’s where Kobach went to speak last week.

Given Kobach’s racially charged main efforts of recent years—working to restrict voting rights and curtail immigration—his relationship with racist groups isn’t too difficult to understand. Maybe it’s time to question Kobach’s claims that he is simply pursuing these issues to enforce the law. His strange bedfellows in the white nationalist movement would certainly agree that fewer immigrants and stricter voting procedures are a good thing, because, well, that would stop brown and black people from being empowered.

It’s time for Kobach, too, to be asked if that’s what drives him.