A look at the rhetoric coming from the group Kansas Secretary of State Kris Kobach has called "a think tank for pro-enforcement immigration policies." 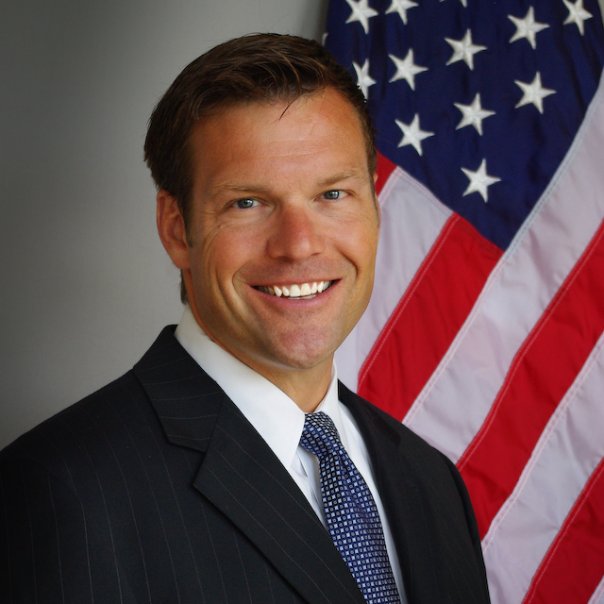 Kris Kobach is feeling the heat after a report from the Center for New Community revealed revealed he addressed a white nationalist event late last month.

Kobach has responded by doubling down, calling the Social Contract Press (TSCP) “a think tank for pro-enforcement immigration policies.” This couldn’t be further from the truth.

For over two decades, TSCP’s main outlet, its Social Contract journal, has published a litany of hate speech penned by some of America’s most vile white nationalists.

Below are some examples of hate speech TSCP has published since its first issue in 1990, and those figures it has promoted on the American racist right.

A stalwart on the racist speaking circuit, Lutton has connections to several hate groups including the Holocaust-denying Institute of Historical Review, the anti-Semitic journal The Occidental Quarterly, and the Council of Conservative Citizens (CCC), which Dylann Roof cited as his gateway into the racist world. Lutton is a close friend of white nationalist John Tanton, TSC’s publisher and the founder of the modern-day anti-immigrant movement. In the 1980’s Lutton authored a virulently anti-gay book claiming gay sex should be made illegal, LGBT people should be prohibited from having custody of children, including their own, HIV-positive LGBT people should be "quarantined,” and all AIDS patients should be denied admittance to regular hospitals. The book argues that it may be necessary to "exile" all active LGBT people from America. In 1994, an anti-immigrant book Lutton co-authored with Tanton was banned in Canada for hate speech.

Taylor is the founder of the New Century Foundation and edits its American Renaissance magazine, which, despite its pseudo-academic polish, regularly publishes proponents of eugenics and blatant anti-black and anti-Latino racists. Taylor also hosts a conference every two years where racist intellectuals rub shoulders with Klansmen, neo-Nazis and other white supremacists. Following Hurricane Katrina in 2005, Taylor wrote in American Renaissance, “"Blacks and whites are different. When blacks are left entirely to their own devices, Western civilization — any kind of civilization — disappears."

Vinson is a founding member of the neo-Confederate hate group League of the South (LOS). Vinson is an adherent of Kinism, a white nationalist interpretation of Christianity. In 1998 Vinson edited probably the most notorious issue of TSC, titled, “Europhobia: the Hostility Toward European-Descended Americans.” The issue railed against multiculturalism, arguing that it was replacing “successful Euro-American culture” with “dysfunctional Third World cultures.”

Sam Francis was one of the most influential white nationalist thinkers and writers in recent memory. The ubiquitous presence of his columns in racist forums and his influence over the general direction of right-wing extremism has remained steadfast since his death in 2005. He served as chief editor of Citizens Informer, the newsletter of the CCC. In 1995 he wrote, “"If whites wanted to do so, they could dictate a solution to the racial problem tomorrow — by curtailing immigration and sealing the border, by imposing adequate fertility controls on nonwhites and encouraging a higher white birth rate, by refusing to be bullied into enduring "multiculturalism," affirmative action, civil rights laws and policies; and by refusing to submit to cultural dissolution, inter-racial violence and insults, and the guilt that multiracialists inculcate."

“[A] ban on Muslim immigration would give the FBI and our national security agencies a useful weapon to use against those the agencies suspect of being terrorists. There is a precedent. The aforementioned ban against the immigration of Communists and Nazis was used in much the same way against those who were suspected of being Communist or Nazi sympathizers. In addition to preemptive screening, terrorist suspects who managed to immigrate and were later caught attending a Mosque could have their visas revoked for falsifying their immigration applications, and be deported before they became a threat.” – K.C. McAlpin – TSC website, February 2, 2011

“Nigerian citizens, many of whom enter on student visas, are part of an international crime syndicate headquartered in Washington, D.C. and now active across the country. They specialize in huge drug deals and major fraud schemes, and are among the most violent of criminals.” – John Tanton – TSC – Spring 1993

“Immigration is a potent weapon in this struggle for dominance. The politicizing of universalism by Western elites and their legal and social institutions - among them government, education, media, entertainment, religion, etc. - has deluded many European-derived people into believing that it is immoral to survive as a distinct group. As a result, they can find no reason to resist the Third World flood inundating the West - a flood that is rapidly breaking down the culture, institutions and unique character of Western civilization.” - Michael Masters – TSC – Fall 1997

“By continuing to ignore the irrefutable demographics of the growing cancer of immigration, suddenly our kids and grand-children will awaken, perhaps 25 to 50 years from now, and see that the culture of our unique-ness and the brilliance of our economic system have been spirited away, pillaging our competitiveness, our technology, and our national spirit.” – Donald Collins – TSC – Fall 1996

“Whites therefore need to ask themselves what will be their own future in a country in which for the first time they will be a minority. The logical projection of that future is that whites will increasingly find themselves subjected to discrimination and even persecution by a non-white majority raised to believe - through education, through political and other public rhetoric, and through their own folklore - that whites are an evil enemy who at least in the past dominated and exploited non-whites. We can anticipate, on the basis of contemporary trends, what some of the forms of anti-white discrimination and persecution might be.” – Sam Francis – TSC – Summer 1998