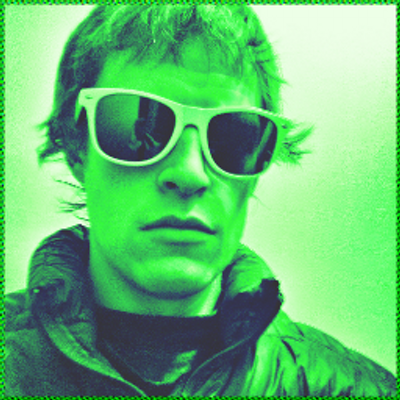 David Joseph Lenio was busy this past summer, re-Tweeting 348 messages – many of them anti-Semitic and hate-filled – and defying the judge’s order, even as his defense attorney and Flathead County, Mont. prosecutors reportedly discussed a plea deal that could allow him to duck a felony conviction and get his firearms returned.

While authorities are apparently unaware of Lenio’s current social media presence, they still haven’t said publicly how the 28-year-old accused Twitter terrorist got access to post hate messages on Facebook while locked in a Montana jail cell where there is supposed to be no Internet access.

Now, the possibility of a plea-deal for Lenio is drawing national attention with an Internet petition drive –– already with 5,797 signatures, including 324 from Montanans –– strongly opposing any plea bargain that leaves Lenio facing anything short of a felony conviction.

“Tell Flathead County Attorney Ed Corrigan: ‘Do not settle for any outcome that might allow Lenio to own guns again,’” the petition by the Coalition to End Stop Gun Violence says.

Ladd Everitt, the coalition’s director of communications, told Hatewatch that only a felony conviction will prohibit Lenio from purchasing and owning firearms.  If the prosecutor agrees to a misdemeanor plea or pre-trial diversion that allows Lenio to get his guns back, “then blood will be on [the prosecutor’s] hands if Lenio takes advantage of the situation to carry out his declared plans.”

Lenio’s trial was scheduled to start on Monday in Kalispell, but was abruptly postponed until January, apparently as behind-the-scenes plea negotiations continue.

The postponement didn’t stop a group of Montana human rights activists and two rabbis, along with former gun violence expert Jonathan Hutson from calling a press conference on the courthouse steps, the Missoulian reported.  The community leaders and religious leaders demanded nothing less than a felony conviction for Lenio and announced the national petition effort.

They apparently were unaware of Lenio’s bold use of social media that began within weeks of  the judge authorizing his release from jail in mid-July to live with his parents’ in Grand Rapids, Mich.

His subsequent Twitter posts include messages about a person’s urge to kill people and hatred for Jews along with links to extremist conspiracy theories that Israel was behind the attacks of Sept. 11, 2001, and that the terrorist attacks were justified. 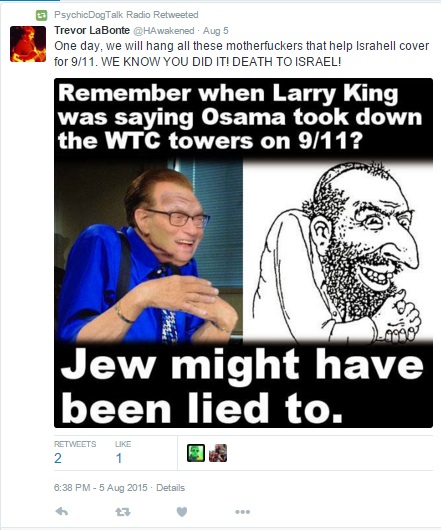 District Court Judge Heidi Ulbricht agreed to release Lenio from jail without posting a bail, but forbade him from using social media, possessing firearms or contacting witnesses. He also was ordered to undergo a mental health evaluation.   There is nothing in the court file to indicate any of those conditions have been met.

Because of his use of social media, the judge could order him back into custody or re-impose the $500,000 bond that was initially set.

Stacy Boman, the deputy prosecutor handling the Lenio case, wouldn't accept phone calls, nor did she return an e-mail request for comment. "The comment would come from Ed Corrigan and he's out of the office today," Vickie Eggum, the administrator for the prosecutor's office, told Hatewatch.

Lenio was released from jail in Kalispell, Mont., on July 17, and the following month resumed his Twitter activities, where he is known as @PsychicDogTalk3.

The itinerant cook and snowboarder, who left his Michigan home in 2009, was charged in Flathead County District Court with felony counts of intimidation and criminal defamation for Twitter posts. In September, the trial judge dismissed the criminal defamation felony charge, declaring the state law to be too broad and infringing on Lenio's free speech rights. But the judge left intact the felony intimidation charge.

Lenio was arrested on Feb. 16 at a ski resort near Kalispell after making Twitter postings claiming he wanted to assassinate a rabbi, gun down 100 schoolchildren, exceed the number of victims killed at Sandy Hook and engage in a killing rampage until the “cops take me out.”

A search of Lenio apartment and vehicle turned up a Russian-made bolt-action rifle, a 9mm semi-automatic rifle, ammunition for the weapons, a .32 caliber semi-automatic handgun, jugs of urine and marijuana. He was arrested a day after he moved his cache of weapons and ammunition from a storage locker into the Kalispell apartment. The day of his arrest was a school holiday, and Lenio spent the day snowboarding while authorities heightened security at Kalispell schools.

When arrested, Lenio immediately confessed to making the threats, but his taped confession may be ruled inadmissible because FBI agents –– taking the lead in the interrogation –– waited seven minutes before reading him his constitutional rights.

His continued use of social media in defiance of the judge’s order doesn’t come as a surprise to Jonathan Hutson, a former spokesman for the Brady Campaign to Prevent Gun Violence, in Washington, D.C. He initially alerted law enforcement on Feb. 15 after intercepting Lenio’s hate-filled Tweets. The Maryland dad said he believes the postings cross the line between free speech and hate crime. “If he gets his guns back, courtesy of the state of Montana, then he could deliver on his threats.”

After Lenio was arrested, Hutson alerted authorities that while locked up in the Flathead County Detention Center, the suspect was able to access and update his PsychicDogTalk Facebook page – filled with hate and conspiracy postings -- between March 3 and July 16. Jail rules forbid Internet access for any inmate, leaving Hutson with the plausible theory that someone smuggled a cell phone into the jail for Lenio to use.

“I’ve never got an answer how he was able to access his Facebook page while he was in a jail cell where there is supposed to be no Internet access. That is a security threat.” Hutson told Hatewatch.

On Dec. 30, the day he moved to Kalispell, Lenio posted multiple times that he wanted to shoot up a Kalispell grade school. In one Twitter message he said he wanted to make national news, saying:  “I david lenio know israel did 9/11 and I am so poor that I want to shoot up a kalispell Montana public school ...”

In a follow-up posts, he wrote: “Seriously I think it would b hilarious if someone beat the sandy hoax school shooting spree high score in kalispell Montana cuz I'm too poor.”

“So let's see how long I can express desire to see a shooting spree in kalispell Montana school b4 I get attention.”

In another Dec. 30 Twitter post: “I hope someone goes on a massive killing spree in kalispell school because I'm so poor I can't afford housing and don't care about your kids.”

Hutson said he believes authorities are going soft on Lenio because he’s white, with a father who’s an investment banker.

“I doubt that in Montana, a Native American or a Muslim would get preferential treatment, if he threatened to shoot grade school kids and religious leaders, and had a van full of marijuana, jugs of urine, and a weapons cache. And I [believe] there will be a national, public outcry if the State of Montana puts Lenio's guns and ammo back in his hands.”