A protest that for months was billed in right-wing media as an “epic rights flexing march” –– an Oath Keeper arming black residents with AR-15s and marching them through the streets of Ferguson ––  turned out to be little more in the end than an exercise in futility. 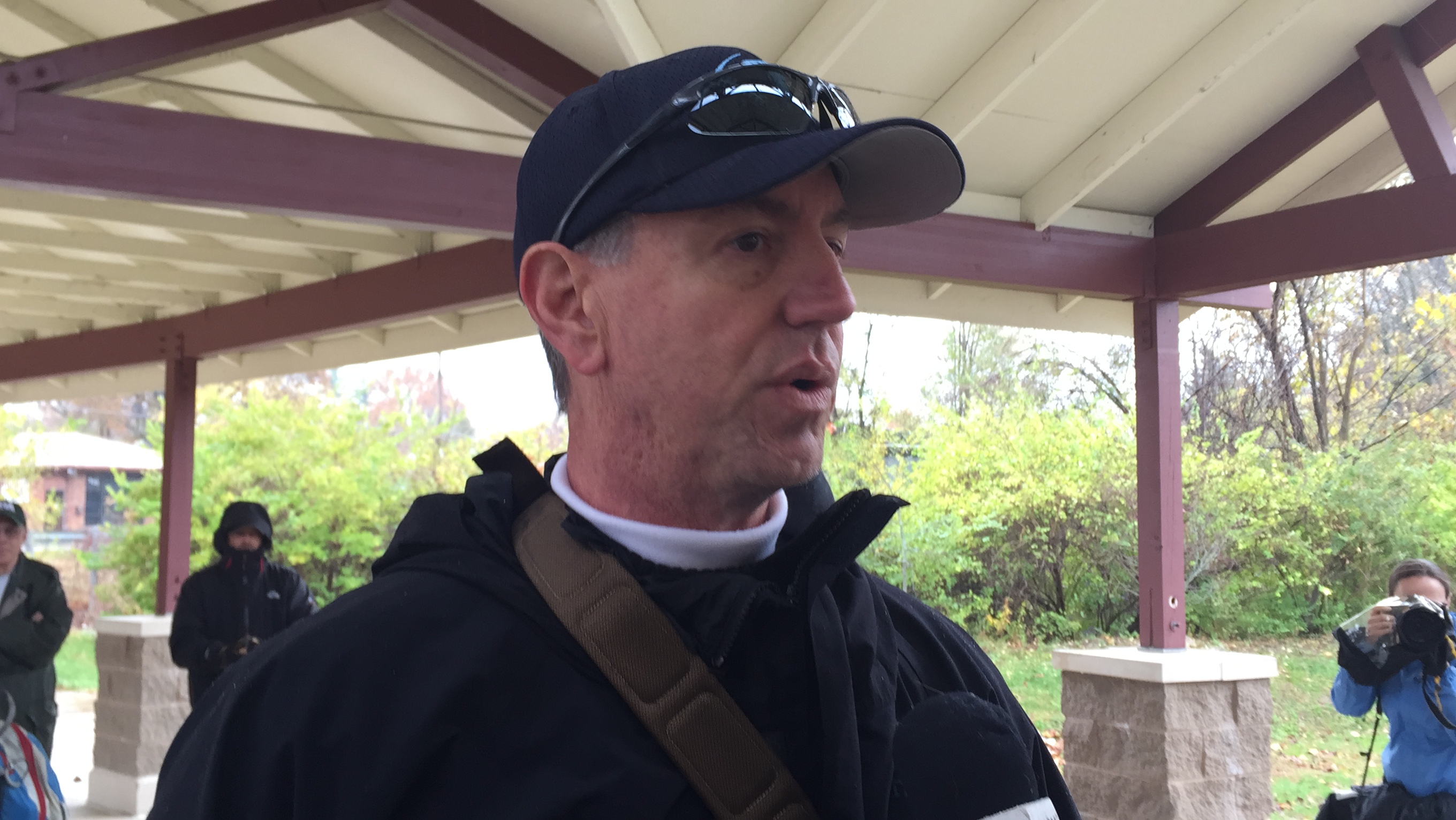 Sam Andrews, the former leader of the Oath Keepers in St. Louis, led the march on Tuesday from a public transit pavilion to the Ferguson Police Department and back. But there were no armed black protestors from Ferguson at his side, as he had promised. Instead, the two dozen or so who came were gun rights enthusiasts, Obama birthers and Andrews’s family and friends.

A protest that attracted so much attention, and ultimately led to Andrews leaving the Oath Keepers over an argument with founder Stewart Rhodes, proved in the end to be a glimpse at the complicated internal politics of an organization that has worked hard to put itself at the center of the most contentious issues on the American cultural landscape, from LGBT rights to land rights.

And as the protest was about to begin, Andrews was eager to explain why.

“The [Oath Keepers] leadership didn’t want black people to be armed in a protest,” Andrews told Hatewatch on Tuesday. “They didn’t want to see black people opposing the police. They were perfectly OK seeing white people and people of different colors pointing their rifles at federal agents at the Bundy Ranch. But you can’t have black people marching for their rights with their rifles pointed at the ground.”

Comprised of law enforcement and former military personnel who fear the Constitution is being undercut by a tyrannical government, the Oath Keepers understood that arming protestors against the police who make up potential Oath Keeper recruits was almost self-sacrificial, Andrews said. But if the 2nd Amendment was absolute, as Andrews and the Oath Keepers believe, there was no reason not to arrange the protest.

Unless the question was of whether to arm black people.

In August, Andrews told Newsweek that “fear had contributed to destructive protests” and his intentions were to bring the same message to the inner city as they brought to Nevada in April 2014, when hundreds of armed Oath Keepers defended cattle rancher Cliven Bundy in his fight with the federal government.

“They don’t know how to react to the abuse, so they throw rocks and bottles and do other silly stuff, but we are flying black Oath Keepers from around the country to educate the black leaders and the people of Ferguson that not only can you open carry, you should open carry,” Andrews told the magazine. “The peaceful protestors, the lawful people which make up the vast majority of protesters, should be quietly standing there with rifles, saying, ‘We’re not going to take this abuse anymore.’”

Rhodes, however, told Reason magazine that he questioned Andrews intentions and cautioned him from making it seem they were training Ferguson residents to “confront the cops.”

"He could not take constructive criticism," Rhodes told Reason. "All we were doing is saying, 'Look, Sam, don't make it sound like we're gonna arm violent people who were rioters. We're gonna arm the good people of Ferguson, to stand up for their rights against the police and to control the hoods.'"

The hoods? It is that cultural disconnect that has landed the Oath Keepers in such hot water in Ferguson, at almost every step along the way. 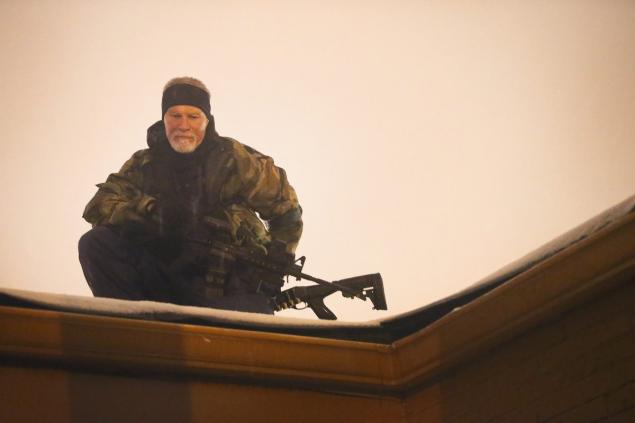 The Oath Keepers first made national headlines in Ferguson a year ago when pictures surfaced of armed members standing atop white-owned businesses in Ferguson, as civil unrest raged on the street beneath in the weeks after the death of Micael Brown on Aug. 9, 2014. It was simply another moment in a five-year history of Oath Keepers popping up — invited and uninvited — around some of the more contentious backdrops involving questions of law and order.

The Oath Keepers, in fact, have eagerly sought out opportunities to present themselves as the keepers of law and order — from Quartzsite, Ariz., where Rhodes’ Oath Keepers took a stand against what they saw as a corrupt city council, to the latest efforts offering personal protection to Rowan County, Ky., clerk Kim Davis, who defied the Supreme Court’s ruling on same-sex marriage.

Perhaps it is no wonder that the turnout on Tuesday was so slim. The weather may have been a contributing factor, but long before the protest began, there were rumblings of distrust.

On one Facebook group, the Huey P. Newton Gun Club, discussion ran the gamut, with some concerned that the very ideology of the Oath Keepers would undermine the mission.

“Don’t touch the Oath Keepers,” a user identified as Joe Kelly wrote. “They’re vigilantes whose concept of open carry is about white aggression and the defense of white power and privilege. They need 50 blacks on their parade to serve as a foil for an agenda that is purely white supremacist.”

But no one came to provide the foil, and the Oath Keepers have never openly espoused a white supremacist ideology. Rhodes’ concern over arming black protesters against police was either the unfortunate reality of finding his group at the nexus of race and the 2nd Amendment, or simply a political worry that even Andrews understood.

“There are two things we could accomplish," Andrews told Hatewatch. "One is black people and white people are going to stand together and exercise their rights, to show minorities all around the country that you have the right to defend yourself and open carry.” Andrews continued, “The second thing is nobody shows up, and it proves my point: that people are completely afraid of these serial rights abusers called the St. Louis County Police and the St. Louis City Police.”

When the time came to march, Andrews’s second prediction came true. There were more cameras than guns, and more news reporters than protesters, none of whom were from Ferguson, and only few armed with rifles.

The lone armed black protestor was Paul Berry III, from Bridgeton, Mo., who is exploring a congressional run in Missouri’s 1st Congressional District. An avowed constitutionalist, Berry carried an assault rifle slung over his shoulder for the short march because, he said, Americans' rights are being systemically undercut.

“By doing this today, the guys tomorrow will know that when they march around the street, that they’re not going to be killed by law enforcement, or anybody else,” Berry said during a speech in front of the police station. “What’s the point of having [the Constitution] if we’re not going to respect it. This is America. And people need to figure out what’s the best solution.”