Following Donald Trump’s statement Dec. 7 calling for a ban on all Muslim immigration to the U.S., many of his fellow presidential candidates lined up to denounce the idea.

To support his idea of a ban, Trump cited a poll conducted by the anti-Muslim Center For Security Policy (CSP) headed by Frank Gaffney. Gaffney has long pushed anti-Muslim conspiracy theories, such as that the government has been infiltrated by the Muslim Brotherhood, and he has repeatedly made bigoted comments about this population. 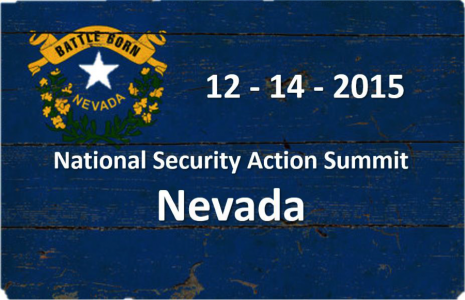 Given the denunciations of Trump’s anti-Muslim bigotry, it’s a bit surprising to find that some 2016 candidates are slated to speak at a Gaffney-sponsored “National Security Action Summit” this coming Monday in Las Vegas. Not only will Gaffney be on hand to push his bigoted ideas, but he will also be joined by other anti-Muslim activists as well. According to CSP’s website, Ben Carson, Carly Fiorina and Rick Santorum are confirmed speakers for the Vegas event, while Donald Trump, Mike Huckabee, Jeb Bush, Ted Cruz, and Marco Rubio have yet to confirm their attendance.

Gaffney’s comments and bizarre conspiracy theories about Muslims are even more extreme than Trump’s. Gaffney believes the Muslim Brotherhood has operatives in the federal government and has claimed that there is “compelling circumstantial evidence” that Saddam Hussein was “involved” with Oklahoma City bomber Timothy McVeigh. Earlier this year at the Western Conservative Summit in Denver, Gaffney responded to a question about Somalis working in American meat processing plants by stating, “I don’t know about you, but it kind of creeps me out that they are getting jobs in the food supply of the United States.” 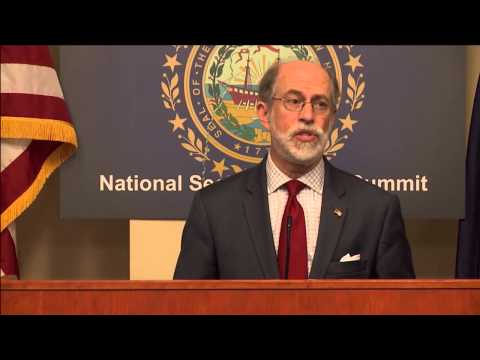 The summit, which will be held at the International Peace Education Center, is the fourth of its kind this year. The previous three summits took place in the early presidential primary states of Iowa, New Hampshire and South Carolina. A number of the 2016 GOP field have addressed previous National Security Action Summits and other Gaffney-organized events. Ted Cruz and Rick Santorum spoke in South Carolina; Carson, Trump and Santorum spoke in Iowa (Cruz submitted a taped address); and Santorum spoke at the New Hampshire event, which also featured taped addresses from Ted Cruz and Mike Huckabee.

Gaffney again teamed up with Cruz and Trump following the announcement of the Iran nuclear deal. Trump and Cruz held an anti-Iran rally in Washington, D.C., on September 9, 2015, which was co-sponsored by CSP. Brigitte Gabriel, head of the largest grassroots anti-Muslim group in the country, also spoke at the rally. Ted Cruz spoke at a Gaffney event in March 2014.

Just over a month ago, in October, Gaffney invited white nationalist Jared Taylor on his radio show to discuss the Syrian refugee crisis. Taylor is one of the most outspoken racists in America today. Following the murder of nine African Americans in Charleston this summer, Taylor was appointed spokesperson by the white nationalist group Council of Conservative Citizens, the group alleged perpetrator Dylann Roof cited as his gateway into white nationalism. After Hurricane Katrina hit New Orleans, Taylor wrote, “When blacks are left entirely to their own devices, Western Civilization—any kind of civilization—disappears.” During the interview, Gaffney called Taylor's American Renaissance website "wonderful," and asked, “Is it the death of Europe what we’re seeing at the moment in terms of this migration, this invasion?” After a number of watchdog groups including the Southern Poverty Law Center wrote about Taylor’s appearance on Secure Freedom Radio, Gaffney backtracked, and attempted to bury the evidence by scrubbing the Taylor interview from his site and claimed he was “unfamiliar” with Taylor’s views before inviting him on.

Other anti-Muslim activists slated for CSP’s event next week include Ann Corcoran, the face of the anti-refugee movement in America. In 2007, she founded the blog Refugee Resettlement Watch (RRW) in response to what she saw as a “grievous error” by the government in taking in Muslim refugees. In the years since, racist groups have increasingly adopted her as one of their own. In 2014, Corcoran promoted an article on Taylor’s American Renaissance website calling it a “good commentary” on immigration to Australia. In April, CSP published her “Refugee Resettlement and the Hijra to America.” The 78-page screed calls for Americans to oppose the opening of mosques in their neighborhoods and also calls for a ban on all Muslim immigration to the U.S. Corcoran spoke at Gaffney’s Iowa and South Carolina summits earlier this year.

Another speaker will be Rosemary Jenks, a staffer with NumbersUSA, the largest grassroots anti-immigrant group in the U.S. NumbersUSA and its founder Roy Beck have a long track record of working white nationalists to advance their anti-immigrant agenda. On Gaffney’s Secure Freedom Radio show in February, Jenks stated, “We know that they are placing terrorists into the refugee camps and we don’t have the means to vet them...The FBI says they’re very concerned about this, the potential dangers of resettling these folks in the United States because we have no idea who they are.” At a Gaffney event in 2014 she equated gun violence and bank robbery to immigration violations, stating, “If you rob a bank, you’re going to jail. Break into a house, you’re going to jail. Shoot someone, you’re going to jail, and everybody’s guns will be taken away.” She added, “But if you break an immigration law, we’re going to let you stay, give you a work permit, and we’re going to call it a day.”

Given the justified denunciations following Trump’s comments, GOP candidates and the party as a whole would do well to take a public stand in opposition to anti-Muslim hate.  A positive first step towards this would be not attending next week’s National Security Action Summit in Vegas. 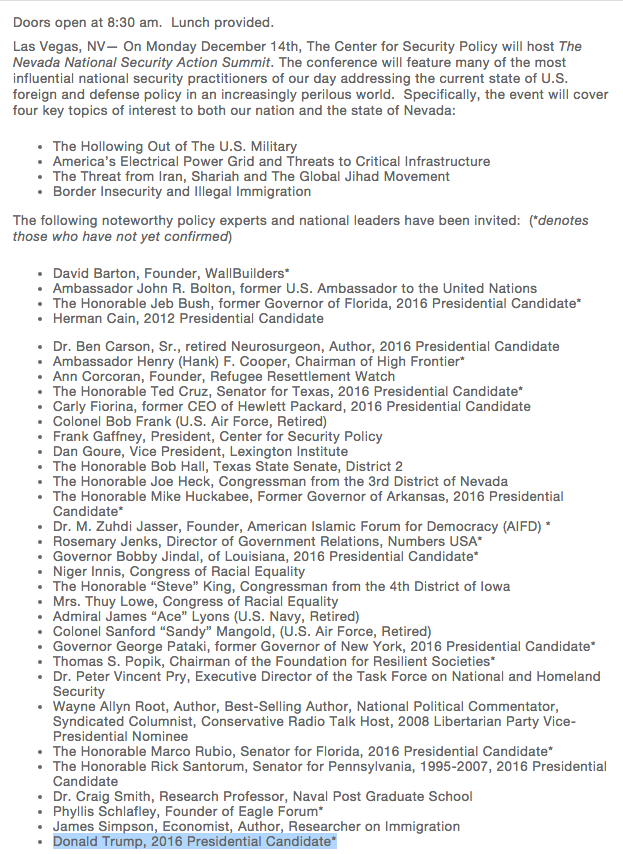