The man who stands accused of the firebombing of a California mosque has made Facebook posts echoing anti-Muslim and anti-Semitic views, while idolizing violent video games and at least one far-right extremist. 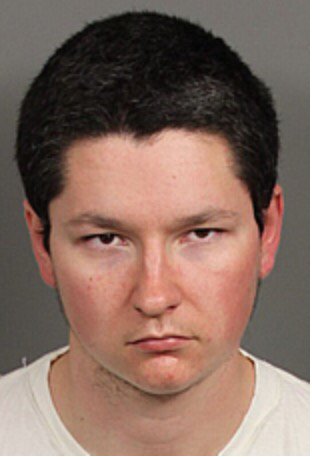 Carl James Dial, 23, of Palm Desert, Calif., is scheduled to appear in court tomorrow in Riverside County on a felony hate crime charge and four other felonies, including arson, maliciously setting a fire and second-degree burglary.

He was arrested last Friday evening, nine hours after someone threw a fiery Molotov-cocktail into the Islamic Society of the Coachella Valley.  The ensuing fire damaged the lobby and caused smoke damage throughout the 1,800-square foot mosque. The arson attacked occurred just 15 minutes before afternoon prayers, but no one was injured.

Authorities haven’t publicly disclosed what led to the quick arrest of the suspect.

His Facebook account shows him commenting in recent months about ISIS execution videos, heavy metal music and video games, making an anti-Semitic comment about a Kosher market and suggesting a fascination with far-right terrorist Anders Breivik, who killed 77 people in Norway in 2011.

Dial’s parents said their son has been treated in the past for psychiatric issues. John Dial, his father, told NBC News that his son “struggled socially” and became anti-social about 15 years ago.

“He was caught up in social media,” John Dial told NBC, adding. “Social media has produced people like my son, without person-to-person contact. I believe he was lacking in social skills.”

Dial’s Facebook profile includes a screenshot from the imageboard website 4chan, known particularly for unabashed, helter-skelter racism. Many of the memes Dial posted are regularly adapted for discussion on 4chan and terminology matches the typical style of the board with expressions like “kek,” a substitute for “lol” and “Feels good, man,” the text of a frequently posted meme on the board.

The father said he and the suspect’s mother will supply their son with jail commissary money, but have no plans to bail him out. John Dial said his son is innocent until proven guilty, but must accept responsibility if convicted.

“We said to him, ‘I hope you like reading books, because you’re in it for the long haul” the father told NBC. “He’s a man.”

The brazen, day-light firebombing of the California mosque was the latest in a string of backlash incidents that have occurred since the Dec. 2 massacre at the Inland Regional Center, about 70 miles away in San Bernardino.

That attack, labeled an act of terrorism by the FBI, killed 14 people and wounded 21. Authorities say it was carried out by Syed Rizwan Farook, 28, and his wife, Tashfeen Malik, 27, both described as self-radicalized extremists apparently devoted to the ideology of ISIS.

On Friday, the mosque firebombing rattled the small community of Coachella and made national news. The mosque’s acting imam, Reymundo Nour, described the attack as a fire-bombing, and said people inside heard a loud boom before spotting flames.

“We see this as a cowardly act of vandalism that we not tolerate in our community,” Coachella Mayor Steven Hernandez told the Riverside Press Enterprise.

Riverside County Supervisor John Benoit, who visited the mosque, told the Los Angeles Times  the firebombing was “reprehensible and the [person or] people who perpetrated that act should be treated the way we would any other terrorist.”

“It's horribly lamentable that we would paint any group as undesirables based on the actions of an extremely small number of radical folks that don't represent the religion in any way,” he said.