White nationalists and racists are not only boldly showing support for Republican presidential candidate Donald Trump, but at a Super Tuesday rally in Louisville, Kentucky they actually got involved in physical violence with counter-protesters.

At the center of the pushing- and yelling-match was Matthew Heimbach, founder of the Traditionalist Youth Network and its companion white nationalist organization, the Traditionalist Workers Party. He calls himself “chairman of the only true Third Position Party in the United States that is fighting for Faith, family and folk.”

Heimbach, fired a few weeks ago by the State of Indiana as a child protective services case worker, now apparently has time on his hands to devote to supporting political candidates, including Trump.

At Tuesday’s Trump rally, the youthful white nationalist from Indiana and some of his supporters engaged in a free-for-all shoving and shouting match with counter-protesters, some reportedly affiliated with the Black Lives Matter movement.

“Honestly, I had planned to merely attend [the Trump rally] as an idle spectator, but the protesters were as hostile as anything I’ve seen at actual [white] nationalist events,” Heimbach said in writing about the incident.

“The entire point of the BLM’s tactics is to push people until they push back,” Heimbach claimed.

“They’ve actually convinced themselves that these rank-and-file Trump supporters and even Trump himself are synonymous with the Klan, or at least with outright nationalists like myself,” Heimbach said.

“We responded to their chants with chants of our own to attempt to drown them out and did so successfully several times,” Heimbach said. “But they ratcheted up their aggression.”

That’s when he and other pro-Trump supporters got involved in the “heated moment” with counter-protesters captured on videos now making the rounds online.

“One [video clip] features yours truly helping the crowd drive out one of the women who had been pushing, shoving, barking, and screaming at the attendees for the better part of an hour,” Heimbach said.

Not only did Heimbach and his white nationalist friends help push African American protesters out of the rally crowd, they also grabbed some of their anti-Trump signs. They took trophy photos of their “booty” and posted it to the Traditional Youth account: “Behold our booty of anti-#Trump2016 swag from today's #louisville rally...” 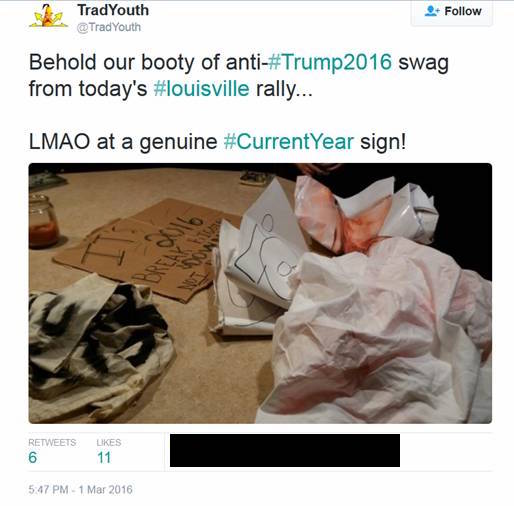 Heimbach now modestly says he’ll avoid any future Trump rallies “to ensure that I don’t become a distraction,” he said.

“It won’t be me next time, but White Americans are getting fed up and they’re learning that they must either push back or be pushed down,” Heimbach said.